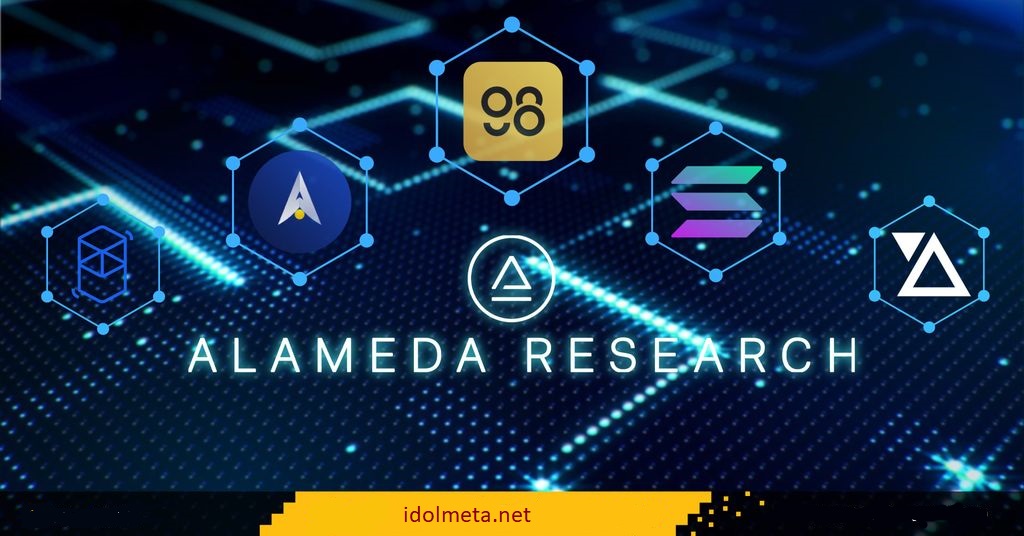 If you have to rank the “crazy” Solana funds, perhaps no one can beat Sam Bankman-Fried and the Alameda Research team. So how do they invest in Solana? Alameda’s portfolio is nothing special. If you read this article, you will understand.

Alameda Research is an investment fund established in October 2017. They manage over $1B in digital assets and have a trading volume of around $1B – $10B per day across thousands of assets, from BTC to other Altcoins.

Alameda Research has a global footprint with the ability to trade on all major exchanges and markets.

Alameda is also one of the few companies with full-service projects. One of them is becoming a Market Maker, providing liquidity to around 35 of the top exchanges today. Or OTC with the advantage of low price deviation, high liquidity, … for any assets listed on the exchange.

Sam Bankman – Fried (SBF) is one of the biggest influencers with the current Crypto market. SBF is also the CEO of FTX – an exchange with an amazing growth rate, as well as a famous Futures field.

In Hurun’s report, SBF is the second richest person in the Crypto market, just behind Brian Armstrong – Co-Founder and CEO of Coinbase. Sam is also on the Forbes 30 Under 30 list in 2021.

On Twitter, SBF shows that he is not only a Builder, but also contributes a lot of information to the community. SBF is famous for its 10 – 20 Tweetstorms about issues in Crypto.

However, for some reason, the current Alameda Research team list does not contain the name of SBF. The high possibility is just to redistribute the roles in the Alameda collective and the FTX exchange. Anyhow, when it comes to Alameda, the first person that comes to mind is Sam Bankman – Fried.

Sam Trabucco used to be a bond and ETF trader at SIG. He graduated from MIT in 2015 with degrees in math and computer science. Sam is one of those very active people on Twitter. Sam’s Tweets are often very helpful to the community.

Below is an overview of Alameda Research Portfolio. 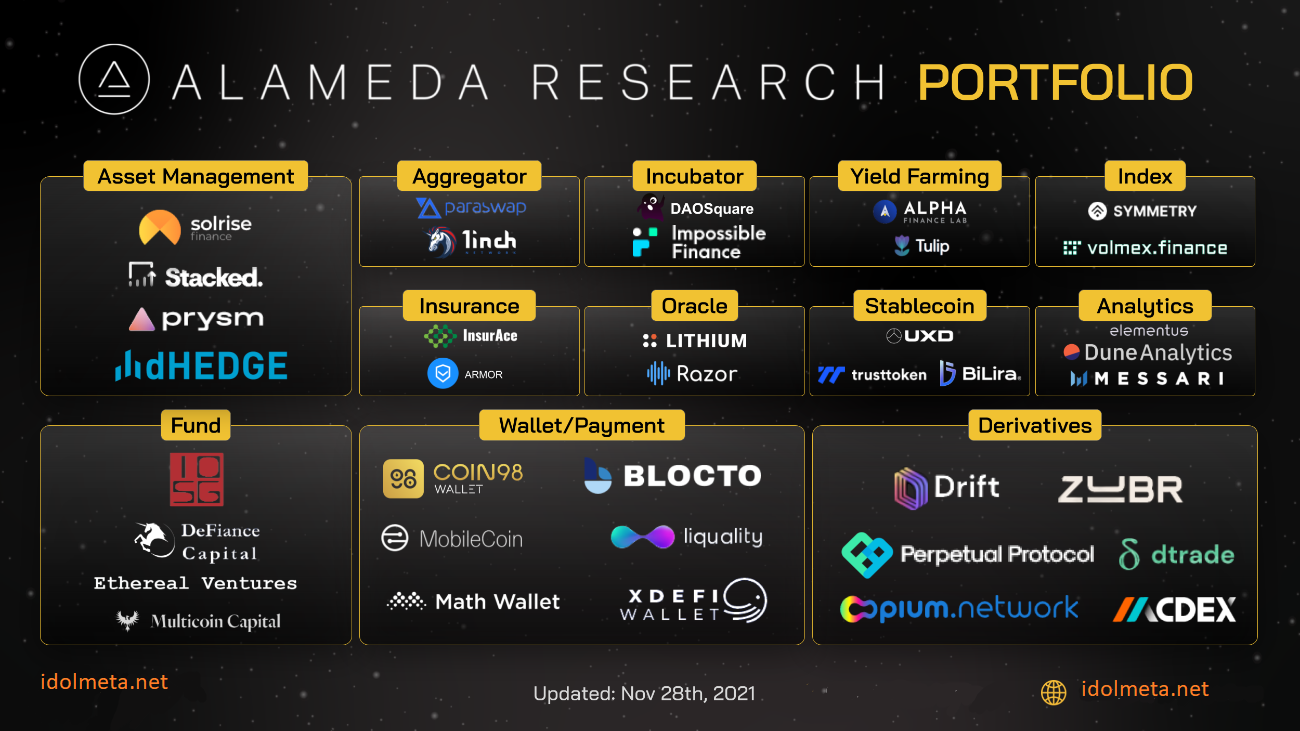 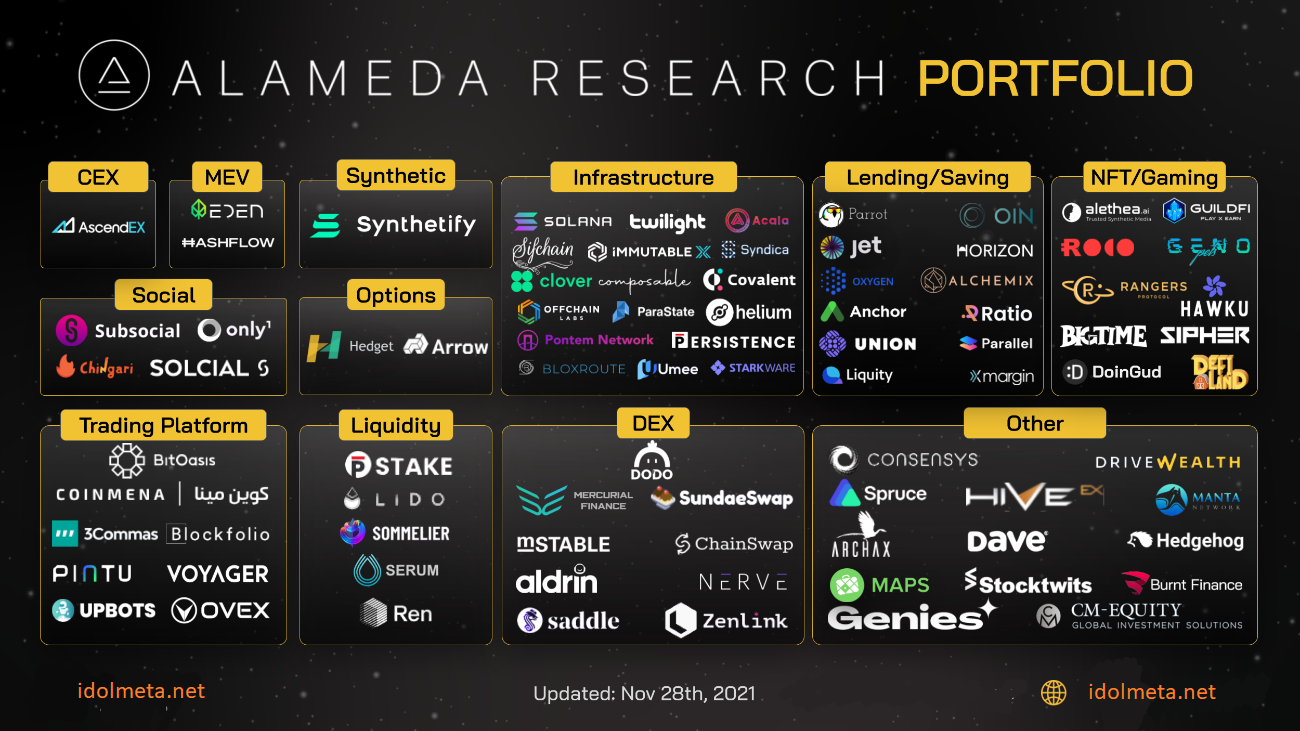 Next, we will take a look at a few outstanding projects of some Sectors.

All of the projects mentioned below have informative articles on idolmeta.net.

⇒ Comment: The above projects have almost no difference. Of these, only dHEDGE has a token and has been around long enough to track ROI, DHT has a pretty bad growth (15x from ATH to ATL).

⇒ Comment: Based on the indicators on Dune Analytics, we see that Alameda has chosen the right leader so far, which is 1inch, as well as ParaSwap – the project that holds the market share is not so bad.

But in terms of returns, the 1INCH token over the past year has only grown 11 times from ATL to ATH, a relatively low number. ParaSwap just released the token in November 2021, so there is not much data to comment on.

⇒ Comment: I can’t find data about Alameda’s investment in any round, nor does Alameda’s name on the Alpha Finance homepage. However, on Alameda’s homepage, there is Alpha Finance. This may be because Alameda bought in the secondary market, so the return on investment is unknown.

As for Tulip, there is not much conclusion when the capital call announcement was just released a month ago.

⇒ Comment: In 2021, there are a lot of big funds investing in data analytics with projects like Dune Analytics, Messari, CryptoQuant,… Although it’s unclear whether these projects will issue tokens or not, but this shows that Alameda also has a common vision with other funds.

⇒ Comment: Most wallets are the same, that is, can do many tasks on a single application. In addition, the current market does not have too many multi-functional storage wallet products. Therefore, with a portfolio of 4 projects that are all wallets, it shows that Alameda is very interested in Crypto storage.

⇒ Comment: In September 2021, there was a wave of Fud from China that affected CEX exchanges. And DEX tokens during that time experienced a massive surge. Two of them, Perpetual’s PERP and MCDEX’s MCB, increased by 80% and 100% respectively in the following days.

Fund here means that Alameda becomes a Limited Partner, who pours capital for other funds to invest to earn profits. According to Infographic, Alameda is giving money to Multicoin, DeFiance, IOSG, Ethereal.

Unlike other funds that focus on DEX only, Alameda invests in a variety of trading platforms, including CEX, DEX, MEV Resistance and trading support applications (Trading Platform).

This shows that not only the platform, but Alemeda also focuses on the problems of trading. The problems are Swap of Stablecoins, bridges between chains, … especially the problem of Bot front-run (MEV). There are many projects working in this area, and less funds are invested in such projects.

Combined with the derivatives segment analyzed earlier, it can be seen that Alameda invests a lot in trading platforms with similar amounts.

This shows that they do not focus on any niche in the transaction, but rather evenly distribute them for better risk management.

⇒ Comment: Most of the most prominent infrastructure projects in Alameda’s portfolio will be invested in 2021. Some of them even have grown many times from the bottom (Helium) , Solana).

In addition, there are three notable names because it is not the project, but the project team, which are Syndica, Offchain Labs and StarkWare. The investment in Syndica and Solana shows that Alameda is very confident in Solana in the following years.

For two companies working in the Layer 2 array, Offchain Labs’ Arbitrum and StarkEX, StarkNET are both quite popular products among Layer 2.

Similar to other funds, Alameda also has deals for the Internet of Blockchains from Cosmos and Polkadot such as:

This shows that they also invest in Ethereum’s congestion-resolving infrastructure like Top-Tier funds. They invest quite a lot, not focusing on a single solution. The only problem is that they invest quite slowly, most of them in 2021.

Talking about the ecosystem, excluding Ethereum, Solana is the place where Alameda invests the most in the Lending segment with 25% of the total number of Lending projects.

⇒ Comment: The NFT/Gaming projects in Alameda’s Portfolio are also very diverse, each with their own strengths, such as Guild, Metaverse, Hub with many features and breakthrough mechanisms (Move-to-Earn). ). In general, there is no common ground in terms of the nature of these projects.

⇒ Comment: This is a very new segment, haven’t seen a breakthrough or interest from the community. While other funds have not invested or invested little, Alameda has 4 representatives. And out of 4 names, 3/4 use Solana as a platform to build projects. It’s still too new to comment on social opportunities.

But with the data theft scandals of centralized social platforms today, it is quite understandable to invest in these Deals by Alameda.

⇒ Comment: Liquid Staking is a quite fertile market when it increases capital efficiency. Therefore, Alameda believes in Lido, the Winner project in this field, in the long term.

Just by reading some of the above, you can see that Alameda focuses a lot on Solana. But here they choose pSTAKE – Liquid Staking project for Cosmos, while their Cosmos Deals are not so prominent. Therefore, pSTAKE is a rather confusing deal in my opinion.

This item has a relatively large name, which is Consensys. Consensys is a company with many products, one of which is Metamask – a name that is too familiar to the Crypto community.

Consensys has two funding rounds with a total amount of up to $265M, with the participation of Mastercard, The Maker Foundation (MakerDAO), Parafi, Dragonfly, Coinbase, Spartan,…

From the above comments, we can see that Alameda invests in quite a few ecosystems: Cosmos, Polkadot,… But most of the resources go to Solana, so in this section I will focus on Solana.

I will review what Alameda currently has in Solana, which project is leading to call for capital, along with the investment time:

Thereby, we can draw the following conclusions:

That’s what I see from Alameda’s Portfolio. Is this also the vision of SBF?

If you have joined Crypto since the end of 2020, you probably know more or less about the “super huge” token payment up to 91.47% of the total supply on January 7, 2021. This number can kill Solana if discharged at the same time.

At the very moment that FUD mushroomed, SBF made a bet with a Fudder: “SOL is currently $2.05, and in that week will never be less than $2.05”. You can see details here.

Around mid-2020, Sam showed his engineering team what Solana was capable of, and everyone was amazed and realized Solana’s potential. Then, in July 2020, Sam announced that he would build a DEX on Solana. It’s not unusual for a DEX to be built on Blockchain, but the important thing is that the person behind this DEX is Sam. And that is the current Serum.

This shows that Sam has seen Solana’s potential a long time ago, not just seeing the opportunity recently.

The top 5 projects with the best performing Tokens (price of ATH compared to ATL) are: 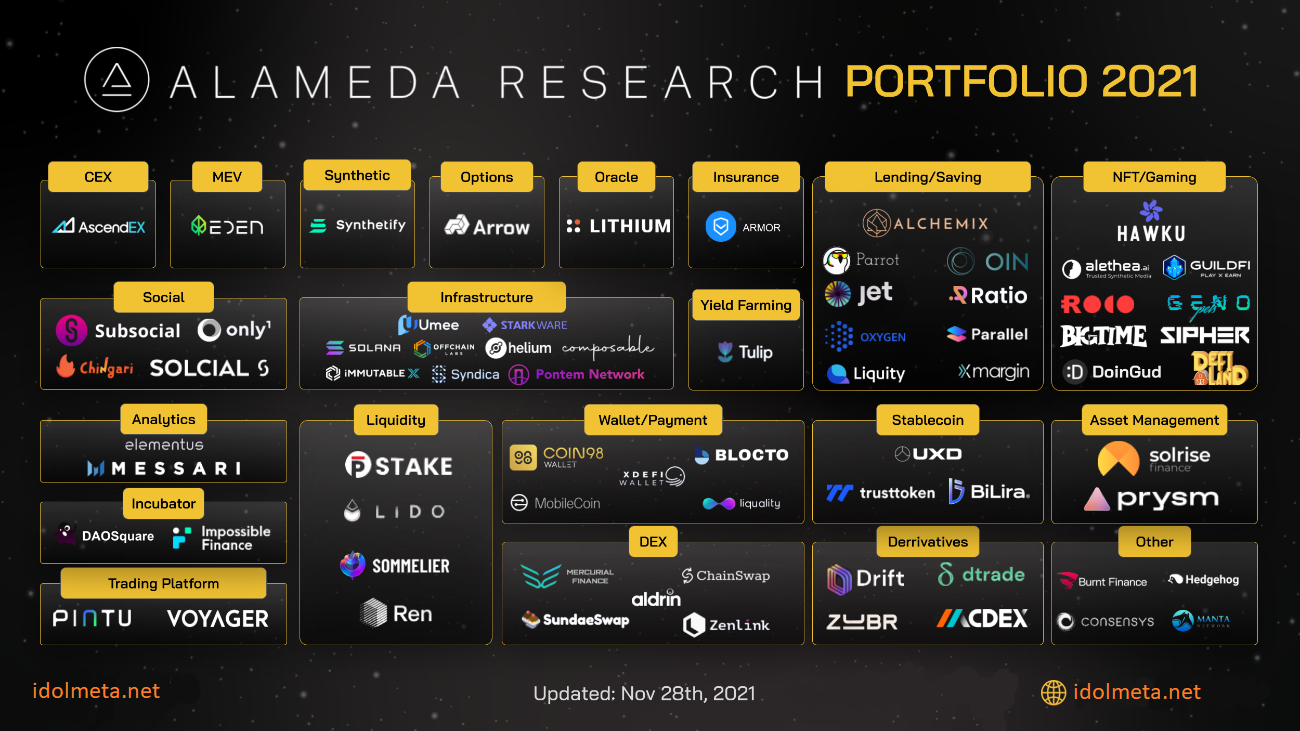 Based on the image above, it can be seen that Alameda focuses on arrays such as NFT/Gaming, Lending, Infrastructure. And of course, most of it is located in Solana. This can be explained by the fact that Solana only really has a huge ecosystem.

In this part, I will talk about a few issues surrounding Alameda’s gameplay through the following information:

On March 8, 2021, Alameda agreed to an agreement to buy Reef Finance’s REEF at a below market price. This is a very normal thing when a fund wants to buy the project’s tokens at a cheaper price, but there are a few conditions. For example, divided into two sales such as Reef Finance.

Despite the fact, Alameda did not say that he wanted to invest in Reef Finance, but just wanted to buy OTC and sell to eat the price difference, but this incident partly shows that Alameda does not always buy tokens to invest in the project. judgment.

If you search for the keyword “Alameda $JOE” on Twitter, you will see many results talking about Alameda having farmed JOE and PNG tokens to release. For example, Tweet you can refer here.

I’m not saying farming and discharging is wrong, because we all want profit in this market, but Alameda is a big fund, and they will farm for a good amount of money.

If these tokens are released when the project is still weak, it will most likely make the project unable to develop in the short term. And Sam Trabucco himself also confirmed that they like Yield Farming in his interview.

Through the above examples, it can be seen that Alameda in addition to investing in fundraising rounds, they are quite active in participating in making short-term profits in projects, especially being able to farm out tokens.

From the above analysis, the following conclusions can be drawn:

Above is an overview of the Portfolio and some comments on investment trends of Alameda Research, if you have any other questions or comments, please comment below to discuss with idolmeta.net !