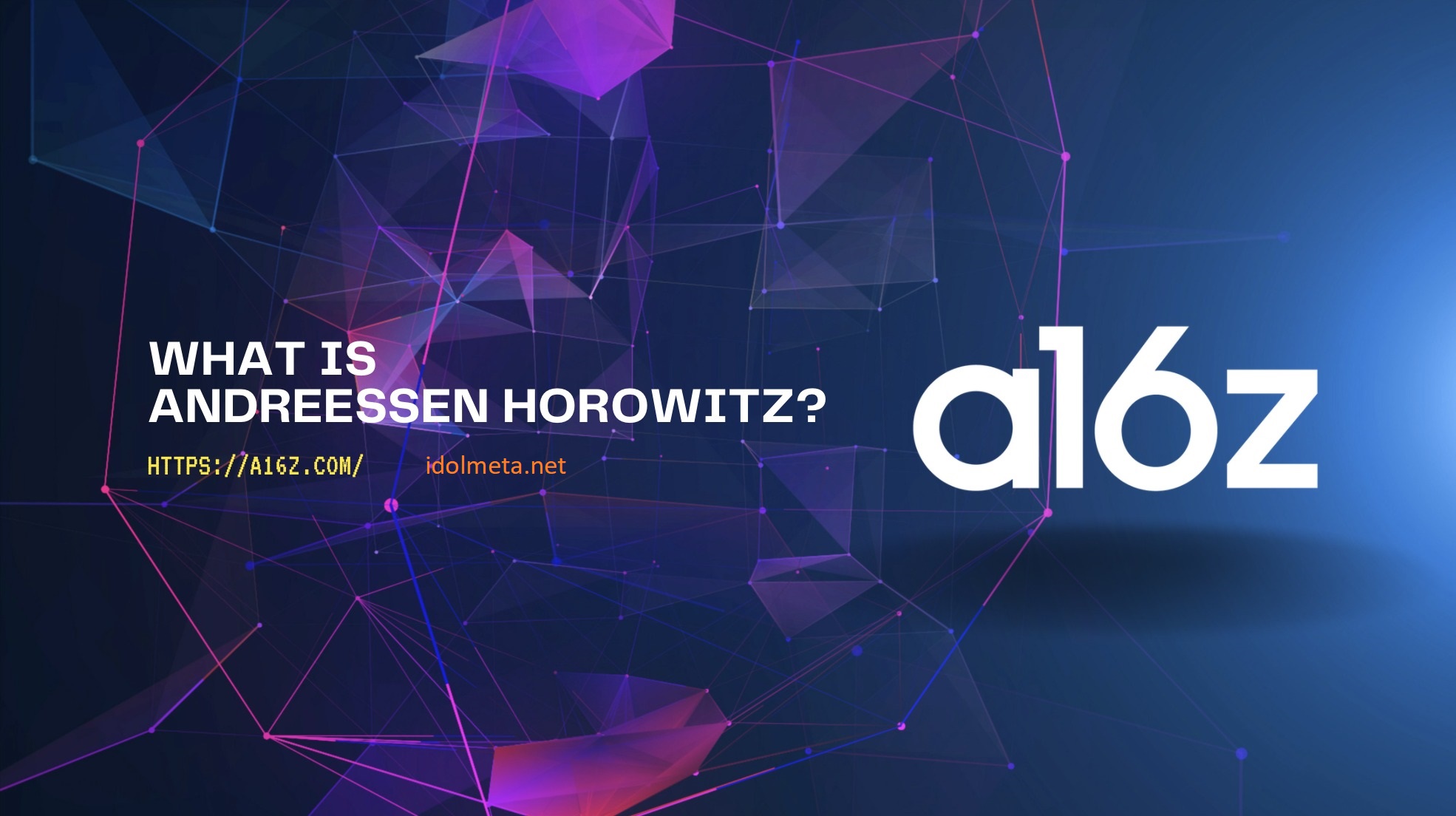 Andreessen Horowitz, or a16z, is an investment fund name that is probably too familiar to you in the crypto market.

It is not an exaggeration to say that this is the largest and most active crypto investment fund in the crypto market today, with many large investments and huge amounts of funds invested in projects.

Andreessen Horowitz invests in the project in stages from the seed round to the Series A, B, C stages… A16Z has invested billions of dollars in various projects and funds over the course of time. 13 years of operation.

The general partners – or fund operators of a16z – have all been CEOs and CTOs of famous technology startups, so this investment fund understands the problems of the startups they invest in to support. timely assistance.

With the above operating principle, the investment vision of the project is extremely long-term. Andreessen Horowitz has been investing in crypto since 2013, and starting out as an investment fund (Venture Capital) and not a hedge fund, they target investments with holding periods greater than 10 years.

They invest in crypto projects regardless of the market situation, because they believe that no matter how the short term plays out, the market will grow in the long term.

They support startups in a variety of ways: recruitment, operations and technical expertise, legal issues, communications and marketing, general administration.

Note: A crypto course to train support founders and projects is also posted on youtube, you can also review and learn because this course provides a lot of knowledge that not only project founders but retailers Investors like you should also know.

You can view the free course here.

They not only focus on investing in a specific area, but also invest in many areas in the crypto market: Layer 1, DeFi, NFTs, gaming, DAOs, social tokens, decentralized social network, Web3, and even new fields that don’t even have names.

Andreessen Horowitz was founded by two founders, Marc Andreessen and Ben Horowitz, and has a dedicated team to invest in the crypto market.

Therefore, in the next part, I will learn with you guys about Marc Andreessen, Ben Horowitz and 4 general partners – the people who are mainly responsible for making investment decisions of a16z crypto.

Marc Andreessen (full name is Marc Lowell Andreessen) was born on July 9, 1971, was born in Cedar Falls, USA, and grew up in New Lisbon, whose parents both worked in incubation and business development companies. .

You can see that Marc Andreessen has been very successful in the field of investment and technology startups since the 2000s, which makes his position in the investment field very good. With such a good position, he easily led a16z to enter crypto early and is the largest investment fund, leading in the market.

Ali Yahya has worked at many big technology companies such as Google X and Google Brain as a software development engineer, working with algorithms to interact with robots and composing open source AI libraries for robots. Google, TensorFlow.

He first learned about official Bitcoin reports in 2010 while participating in research at the Stanford Computer Security Lab and has been tracking BTC ever since.

At a16z, he works closely with the foundation’s portfolio of Layer 1 projects such as Dapper Labs and Flow, Compound, Avalanche, Near, Rally, and Dfinity.

With a long time working in technology companies like Google, and starting to work at a16z and crypto investment since November 2017, Ali Yahya has a lot of experience not only in crypto investment, but also in the field of crypto investment. techniques of software developers, and especially early entry into the market since 2010.

She also helped found Crystal Towers Capital in 2015. Arianna previously spent time in sales and product management roles at Facebook and BitGo, a company that provides enterprise security solutions with BTC and other digital currencies.

Arianna holds a dual degree in International Politics and Spanish from Schreyer Honors College at Penn State University. She grew up in Milan, Italy.

Chris Dixon has been a General Partner at Andreessen Horowitz for the past six years, investing in companies from seed stage to later rounds. Previously, Chris was the co-founder of two startups, SiteCity and Hunch, which were acquired by McAfee and eBay.

Prior to joining Andreessen Horowitz, Chris was also a co-founder of Founder Collective, a venture capital fund that has made investments in various technology companies. From an early age, Chris started programming and became a professional programmer after finishing college, at the options-trading firm Arbittrade.

He holds Bachelors and Masters of Philosophy from Columbia and a Master of Business Administration from Harvard. In addition, Chris Dixon also has many valuable medium posts and podcasts, which you can refer to here.

It can be seen that Chris Dixon has a lot of experience working in investment funds, as well as working in many successful startups, in his youth he also worked in different financial companies.

Besides, Chris Dixon also shared a lot about his investment philosophies and thoughts on the market, on issues such as decentralization, NFTs, Web3,… to learn and to understand more about this person.

Kathryn Haun is General Partner at Andreessen Horowitz. Previously, she worked as a federal prosecutor focusing on fraud crimes, cyber corporate crimes with agencies including SEC, FBI,… for nearly a decade.

She established the government’s first crypto-complaints task force, leading investigations into many of the market’s high-profile lawsuits.

Katie serves on the boards of Coinbase and HackerOne, and has invested in and advised tech startups. She also taught a course in management at Stanford School, in cybercrime at Stanford Law School.

As you can see, Kathryn Haun’s past is mainly experience in working in the field of law, with participating in many different disputes, and when the law on crypto is still not clear. As it stands, Kathryn Haun is one of the market’s legal leaders.

You can check out a16z’s portfolio through the image above. Next, we will take a look at a few outstanding projects of each Sector. All the projects mentioned below have informational articles on idolmeta.net, if you are interested in any project, you can search for the project name to learn more! 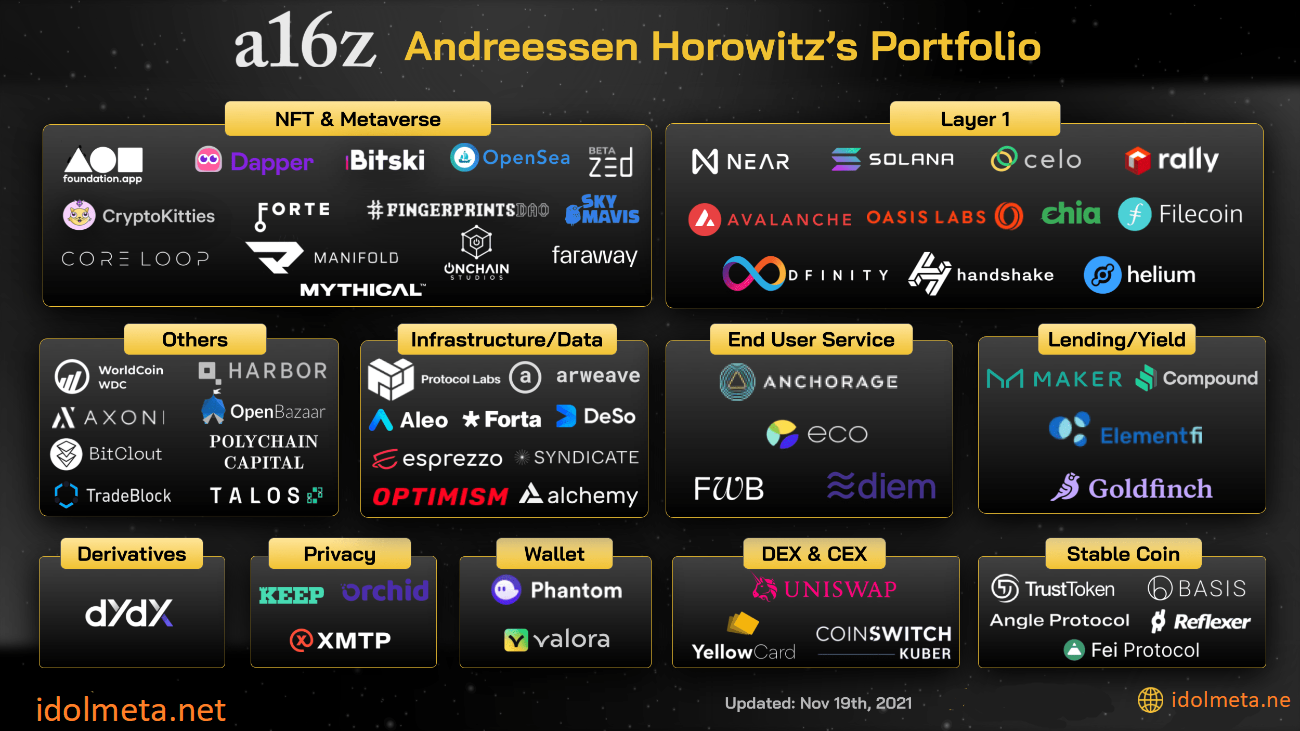 ⇒ Comment: In layer 1 deals, a16z is usually not an investment fund that participates from fundraising rounds too early, they often join from round 2 and 3.

This proves that a16z bet on the development of Layer 1 to replace Ethereum quite early, and they have been quite successful in that bet as Layer 1 has grown rapidly and strongly from the beginning of 2021 to now.

One more feature, the relationship of a16z and Polychain seems to be quite close, when many of the layer 1 deals these two funds participate in, such as Dfinity (2 rounds), Oasis Network, Avalanche, Solana, Celo,…

I will learn more about the relationship of these two VCs with you if I have more detailed information.

Exchange projects invested by a16z include (including DEX, CEX, Derivatives):

⇒ Comment: a16z doesn’t have many investments in AMM DEX or CEX or Derivatives, only invests in some leaders like Uniswap or dYdX.

Stablecoin projects invested by a16z include:

⇒ Comment: Above are 6 stablecoin projects that a16z has invested in, of which only one was successful, one failed and returned investors money.

Investments also mostly happen in 2021, except for the first time investing in Trust Token in 2018 and buying MakerDAO’s MAKER token.

You can also see that investing in stablecoin solutions does not seem to be the strength of a16z, when most of the protocols they invest in are not having good growth in market share, the number of stablecoins circulating in the market. market or number of users (except for Angle Protocol, which just launched not long ago, so it can’t be confirmed, and MakerDAO has been successful with stablecoin DAI).

Most of the time investing in these deals is from when the market was relatively stagnant in the years 2018-2019 (Compound and MakerDAO), and they no longer invested much in the lending segment in 2020, 2021, shows a16z’s vision of lending in DeFi.

A16z’s leading projects in the infrastructure segment include:

⇒ Comment: You can see that a16z’s investments are all announced in 2021, in Series A and B – when the projects have started operating and are adding infrastructure. floor. A16Z was not an early investor in these projects, but invested heavily in the later rounds of these Layer 2 solutions.

NFT / Metaverse / Gaming projects invested by a16z include many different large and small projects, here I will mention all the projects I have collected but only analyze a few typical projects.

Projects featured by a16z in the NFT/Metaverse/Gaming array include:

⇒ Comment: You can see that most of a16z’s investments in NFT/ Metaverse/ Gaming projects are at quite high project valuations (OpenSea two rounds Series A and B, Dapper Labs in round has valuation of $2 billion, etc.).

In addition to Crypto Kitties, the projects they invest in are all in round from Series A onwards (when the project has formed, operates stably and has revenue, and invests to expand the project and customer base) and invest in 2021. They still continuously invest in new NFT/ Gaming/ Metaverse projects from 2021 to the present time.

This further strengthens a16z’s long-term investment thesis, because they really believe in the potential of the project and mass adoption of this segment, because if they only invest in a short-term investment, for continued investment Strong investment when the “circle crypto” is coming to an end will not make sense in terms of profits.

A16z’s leading projects in the infrastructure and data array include:

⇒ Comment: Infrastructure and data projects are heavily invested by a16z and spread throughout their investment journey, and the deals are also growing, culminating in the Alchemy investment. Last.

This is a large segment and needs continuous improvement, so they have been spreading and investing in infrastructure all the time.

The top 5 projects with the best performing Tokens (price of ATH compared to ATL) are:

The Top 5 Top 5 projects with the best performing Tokens from the beginning of 2021 are:

Investment trends of Andreessen Horowitz in 2021

From the beginning of 2021 to the present, Andreessen Horowitz has invested in many deals, in many different areas.

But as you can see, they pay a lot of attention to projects in the NFT / Gaming / Metaverse array with many projects with large raises, and many infrastructure, data and solution projects layer 2 for Ethereum. 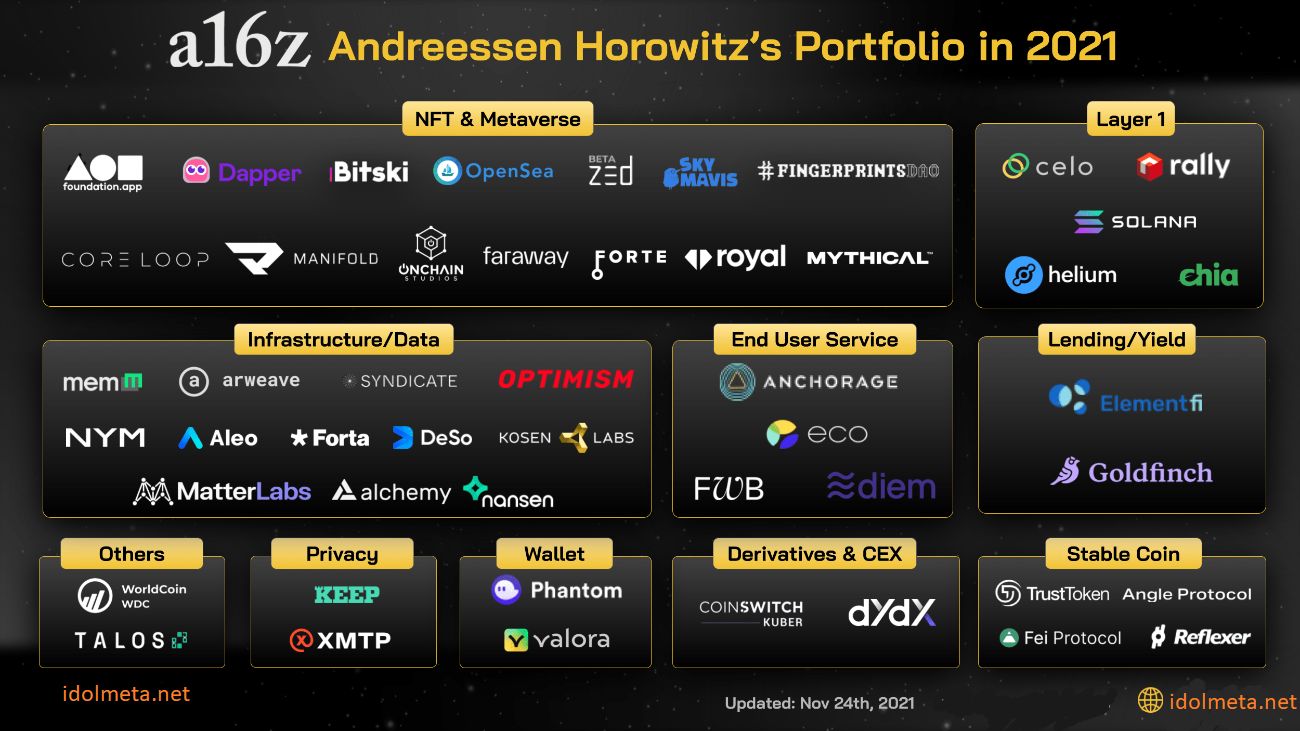 Most of the deals announced by a16z in the past 3 months have increased sharply in both quantity and project investment amount. With the explosion of NFT/ Gaming and Metaverse, 5/9 projects they invested in in November 2021 are in this segment, 4 projects are in the infrastructure and data segment.

Therefore, you can also see their special interest in this segment in recent times, thereby paying attention to the projects they invest in in general and the area they invest a lot in particular to find opportunities. association for yourself.

The relationship between a16z and other investment funds

a16z has a relatively close relationship with Polychain as I mentioned above, when these two VCs regularly invest together in many different Layer 1 projects, in the same round of fundraising of the project (Dfinity, Oasis Network). , Avalanche, Celo,…)

In addition, a16z also invests in Polychain Capital to take advantage of this investment fund’s own strengths.

Above is an overview of the Portfolio and some comments on investment trends of a16z, if you have any other questions or comments, please comment below to discuss with idolmeta.net!

Previous What is Web 3.0?
Next Alameda Research