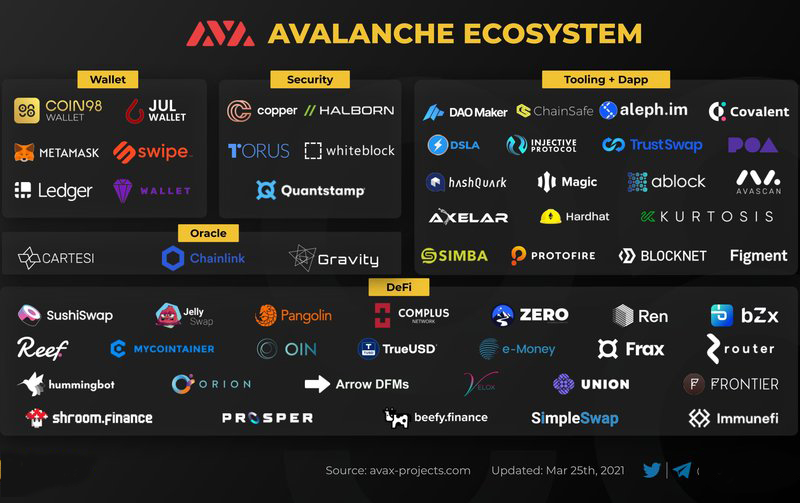 This article will share for everyone: What are the highlights of Avalanche, an overview of DeFi on Avalanche and some outstanding projects.

Avalanche is one of the outstanding projects in the group of projects with the concept of “internet of blockchain”, the project’s native token AVAX also performed very well in Q1/2021.

Avalanche is a project belonging to a group of projects with the concept of “internet of blockchain” such as Cosmos, Polkadot. It is a network of blockchains specifically designed, based on Avalanche Consensus, to be able to interact and transfer value with each other in a trustless manner.

5 highlights of Avalanche when compared to “internet of blockchain” project groups like Polkadot or Cosmos:

Avalanche has launched quite successfully since raising a sizable amount of capital at the end of Q3/2020 and the project’s native token has also performed very well on exchanges.

In terms of ecosystem development, Avalanche also does quite well. In more than 7 months, there have been 163 integrated Projects, supporting Avalanche, mainly in the segment of Infrastructure, Explorer and Tools, Wallet.

But personally, I feel that Avalanche still does not have outstanding features in terms of ecosystem (DeFi) and partners when compared to other ecosystems (Cosmos, Polkadot or Solana).

Recently, the team has started promoting DeFi projects to build on Avalanche, I think Q3, Q4/2021 Avalanche will focus on building DeFi Ecosystem on its ecosystem to attract cash flow from ecosystems. is different.

Overview of DeFi on Avalanche

Overall at the moment, Avalanche is in the early stages of development. Important pieces of DeFi are gradually appearing in the ecosystem such as Dex, Lending / Borrowing, Derivative,….

A subnet is a collection of validators that work together to reach consensus on the state of a set of blockchains. Those collections of Blockchains with its group of Validators are called subnets. A Subnet can have 1 or more Blockchains.

On Avalanche there is a special Subnets, called Primary Network (including 3 chains, C-chain, X-chain, P-chain), all Validators are required to be a member of Primary Network.

Basically, blockchains like Ethereum can become a Subnet (1 blockchain) on Avalanche, and we can build Dapps and protocols on top of that Subnet.

Therefore, Subnets are extremely important in Avalanche’s goal of becoming the Internet of chain.

As far as I know, Athereum will be the next Subnet on Avalanche, it can be visualized as Moonbeam on Polkadot.

Athereum will have Snapshots and Airdrops for Avalanche and Ethereum users, you can learn more at the Athereum homepage. Learn more about Athereum.

If you have information about other Subnets being built on Avalanche, please comment below for everyone to know!

Dex has 2 main types: AMM and Orderbook. Currently on Alavanche only AMM models are the most popular, but they are also not very prominent, mainly clones of ideas from successful projects on other platforms:

Why is Uniswap V2 chosen by many projects to clone such an idea? The answer is quite simple, because it is considered the most basic model for any AMM. You can learn more about Uniswap V2’s operating model and the author’s comments at: Uniswap V2 Model – The Foundation of AMMs

On Avalanche, there are no major Native stablecoins like USDC or USDT, their solution is to use Wrapped tokens for users in the Alavanche ecosystem to access USDC or USDT.

The two partners I find remarkable are:

On the other hand, the Yield line from Avalanche is also very limited and not very diverse, so it is understandable that the Yield Optimizer & Yield Farming does not work well.

Currently, the derivatives segment on Avalanche has no active projects, but initially there are a number of projects that have announced that they are building Derivatives products on the Avalanche platform.

The typical project is Arrow DFMs (Derivative project invested by many big companies, including Delphi Ventures).

Does not appear much on press releases, but currently on Avalanche there are 3 supported Oracle Platforms:

On the other hand, I have not seen any “home” projects from Avalanche related to Oracle started.

As you all know, NFT in general on Ethereum has been extremely developed, on other Chains like Solana, BSC, Near also do not ignore the product line related to NFT and they have started a series of related projects. , Avalanche is no exception.

The scope of NFT is very wide, in this NFT section, I give an overview of the Project teams that are building NFT-related products on Avalanche.

Most of these projects are in the early stages of development, without many outstanding updates.

You still don’t understand what NFT is? Why is NFT so thriving? Learn more with the following article: An overview of the NFTs you need to know

Here are some of their brief summaries:

Previous What is Binance?
Next NFT overview that you need to know