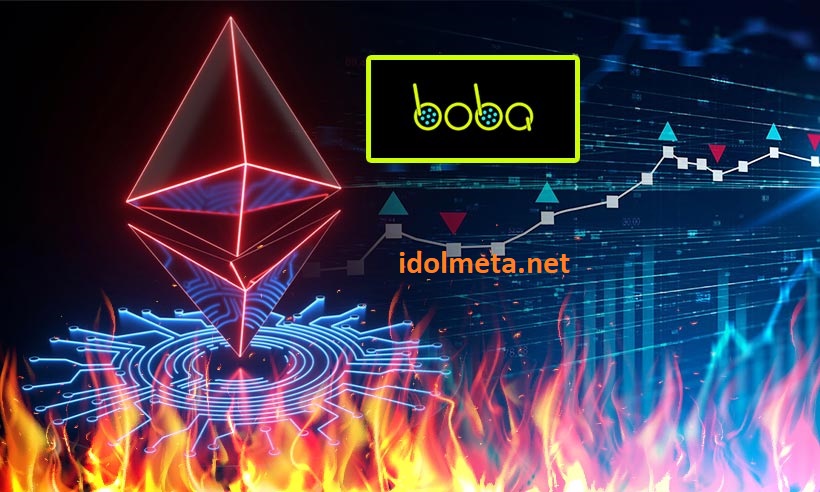 Boba Network is a Layer 2 scaling solution on Ethereum. Does DeFi on the Boba Network ecosystem really have potential?

In recent times, ecosystems have continuously alternated with strong growth, especially in the context that transaction fees on the Ethereum network are already too high.

Therefore, Layer 2 solutions that are compatible with Ethereum and can easily scale up Dapps are one of the extremely preferred options on both the project side and the user side.

In this ecosystem overview, I will join you guys in an ecosystem that receives a lot of community attention and has many events coming up in the near future, which is Boba Network.

To help you keep up with what’s going on in the Boba Network ecosystem, I will go with you in turn through the arrays in this ecosystem, to get the most overview of the system, then search Investment Opportunities.

Boba Network at a glance

What is Boba Network?

Boba Network is a Layer 2 scaling solution on Ethereum that reduces fees, improves transaction processing, and expands the throughput of smart contracts.

In more detail, Boba is an Optimistic Rollup built on the combination of the open source code of Optimism, researched by the Enya & Boba team of the OMG Foundation team, with features such as swap-based, withdrawal short-lived crypto assets between Layers 1 and 2.

Boba Network has high compatibility with EVM layer 1 Ethereum virtual server, helping developers to just tweak the code a little bit in their product (no need to re-code everything from scratch) to be able to bring their original project. I’m on Layer 1 to Layer 2 to work. 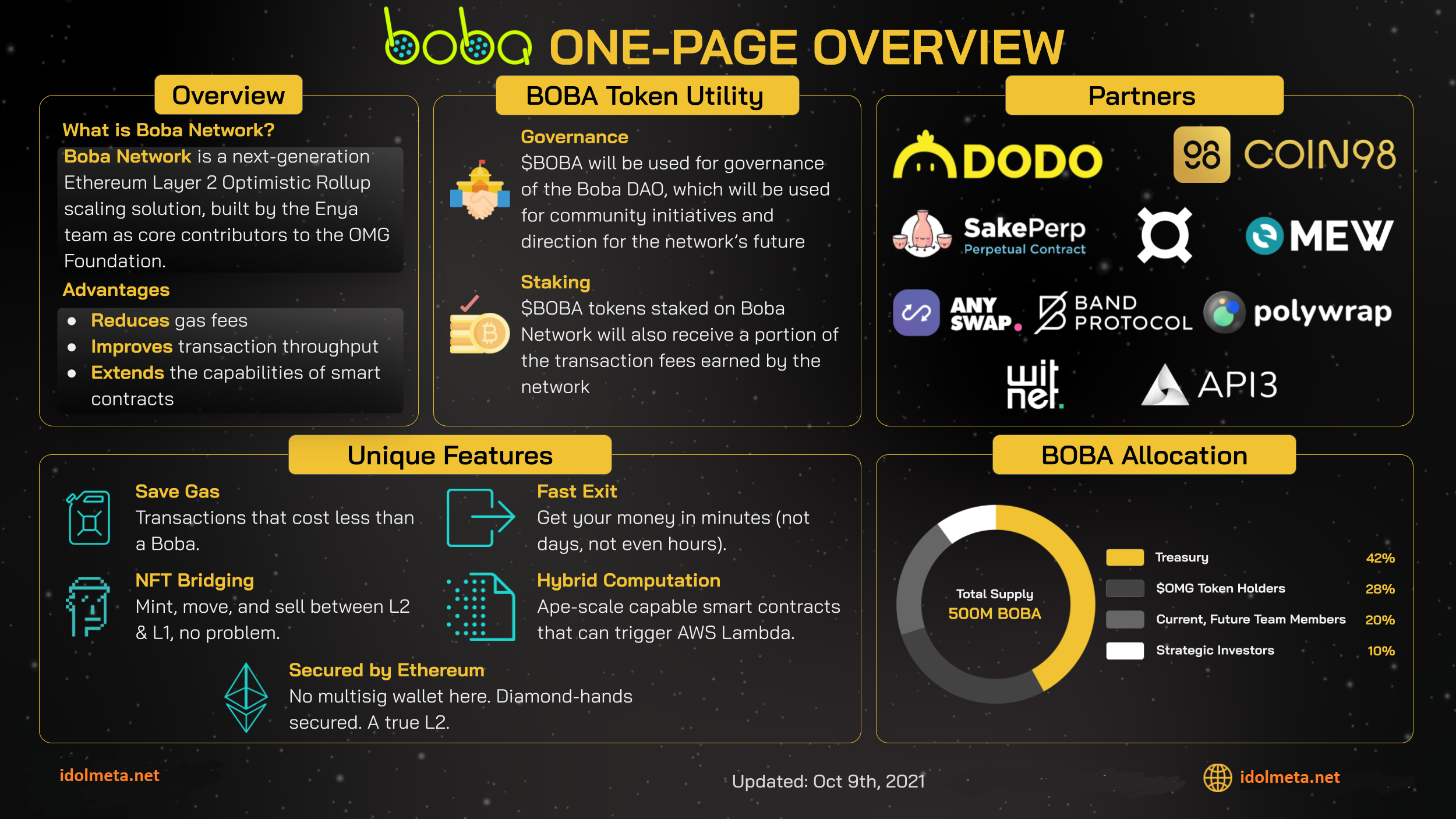 The outstanding features of Boba Network’s Blockchain include:

You can see more information about this network here.

Boba Network ran the Mainnet Beta on August 20, 2021, then 1 month later, on September 20, 2021, they officially launched the Public Mainnet.

Pieces of the Boba Network ecosystem

Currently, the Boba ecosystem is still very sketchy, the BOBA token has not been launched yet, but will be distributed based on the snapshot taking place in the next 2 weeks.

Let’s take a look at each piece of the Boba Network’s very young ecosystem.

Currently, on the Boba Network ecosystem, there are DEX exchanges including:

Currently, the medium posts and docs of the first two native projects published are relatively limited. Therefore, determining who will be the leader in the AMM DEX array is not certain.

Please join me in following this AMM DEX array in the near future.

It is also likely that the top AMM DEX protocols will deploy the protocol on Boba Network and launch attractive packages to capture the market share of native AMM DEX incentives, such as Dodo or Sushi.

Currently, only two DEX exchanges have announced that they will operate on the Boba Network. Need to monitor more closely in the near future, because both projects have not released products and have not issued tokens, so the opportunity to ape-in and make a profit is huge.

Because when the project launches, they will launch programs to attract users and earn good profits such as airdrops for early users and supporters, yield farming to attract liquidity,… and other programs.

Currently, you can see that the total amount of stablecoins on Boba Network has just stopped at $ 30,000 – a very meager number for an ecosystem.

However, this is also understandable with an ecosystem that has just mainnet not long ago and is just about to launch the BOBA platform token.

Furthermore, because there are no active protocols yet, the number of token holders is still in the single digits.

This number will certainly increase strongly in the near future, when the products are released to users in turn and the number of users pull to the platform to enjoy the yield from the projects.

In addition, currently on Boba Network, there is no active lending application, both native projects and projects scaled to Layer 2.

Therefore, it is necessary to monitor closely in the near future because lending protocols play a very important role in any ecosystem.

The Boba Network ecosystem has the following Bridges to the system:

Currently, Boba Gateway is the official solution on the network, developed by the team that built Boba Network.

This bridge is also not used much, with the number of users and the money flowing through the bridge is very small, because the Boba Network ecosystem is not yet mature and there are many applications for users to put money up.

As you can see, other ecosystems have quite a few bridge options to bring money flow from different chains (besides ETH) and different types of assets to their system.

Currently, Boba Network can only bring money flow from Ethereum Layer 1 (Anyswap has not come into operation on Boba Network).

So I guess in the future, they will need Anyswap to go into operation and as well as integrate more bridges connected with many other platforms such as Allbridge, Hop Protocol, or cBridge of Celer Network,… to users have more solutions when using Boba Network.

Then, Boba Network can be connected to BSC, Polygon, Arbitrum, Optimism,… extremely easily. In addition, there are many projects on the platform that have chosen to distribute tokens as airdrops to users of that platform’s official bridge.

Therefore, you can try to use the official bridge above to find opportunities to receive the token airdrop.

The Boba Network ecosystem already has the following infrastructure pieces:

As far as I can see, on Boba Network, there are basic infrastructure pieces to help these L2 Dapps develop.

However, it is still necessary to integrate more infrastructure solutions such as The Graph (to query data), or other toolkits to help developers and users find information, develop dashboards and applications easier.

Currently, you can see that the Boba Network ecosystem is in the early stages of completion.

The number of Dapps is still small, and the main pieces are not complete and complete, making it impossible to attract users to the platform and not happen in a short time.

In the coming time, what this platform needs to do to develop is to increase the number of Dapps on the platform, with applications such as lending, stablecoin DeFi, … by bringing Dapps from Layer 1 Ethereum or looking for protocols native.

Although this is an under-considered ecosystem and is only at the beginning of launching Dapps, with a strong development team (Enya and OMG Foundation), this is definitely an interesting L2 for the time being next.

Do you think the next time will be the explosion of the Boba Network ecosystem, when Ethereum Layer 1 is too expensive, and Dapps start launching?