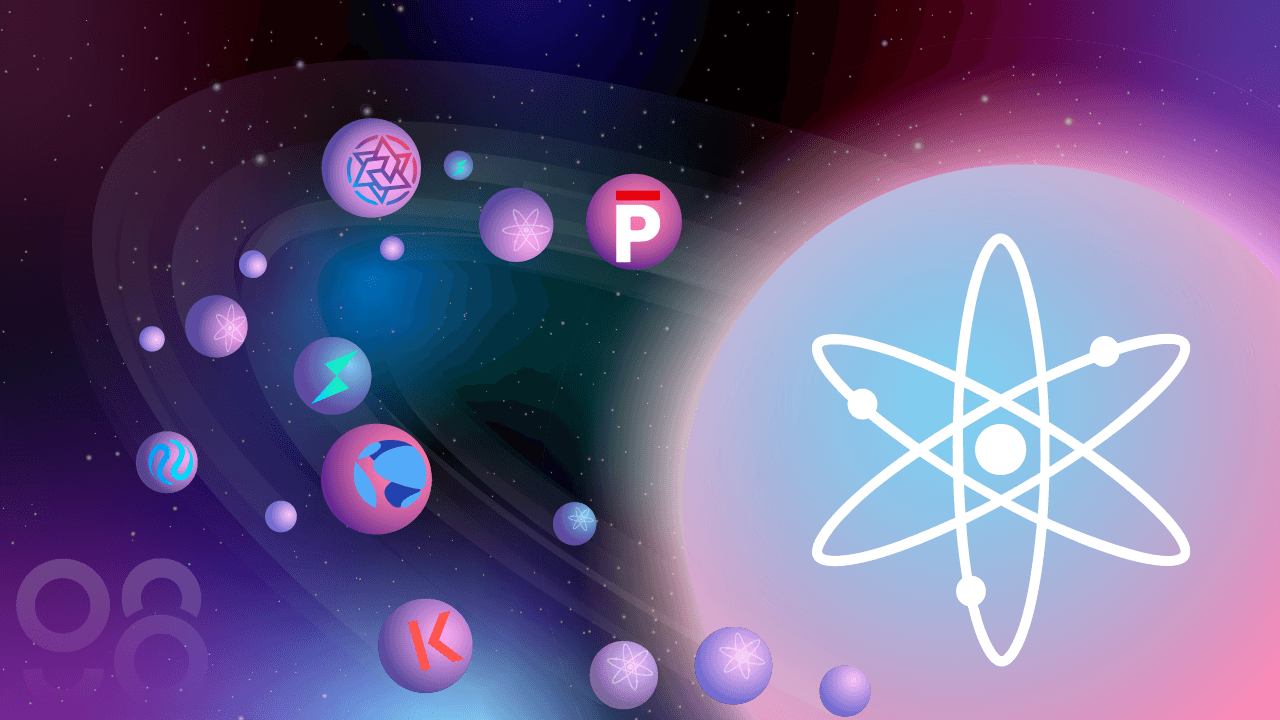 Learn about the Cosmos ecosystem (ATOM) with each piece inside, from which to project the future and find investment opportunities with Cosmos.

Layer-1 Blockchains are getting a lot of attention recently such as Solana, Near, Avalanche, Fantom, etc.

So is the platform connecting Blockchains according to the “Internet of Blockchain” model worth paying attention to?

This article will provide complete knowledge about Cosmos and the Cosmos ecosystem – the first Internet of Blockchain platform on the market.

The Cosmos is a Layer-0 Blockchain, evolving to become the Internet of Blockchain. Cosmos was born to solve 3 problems of current Blockchain: 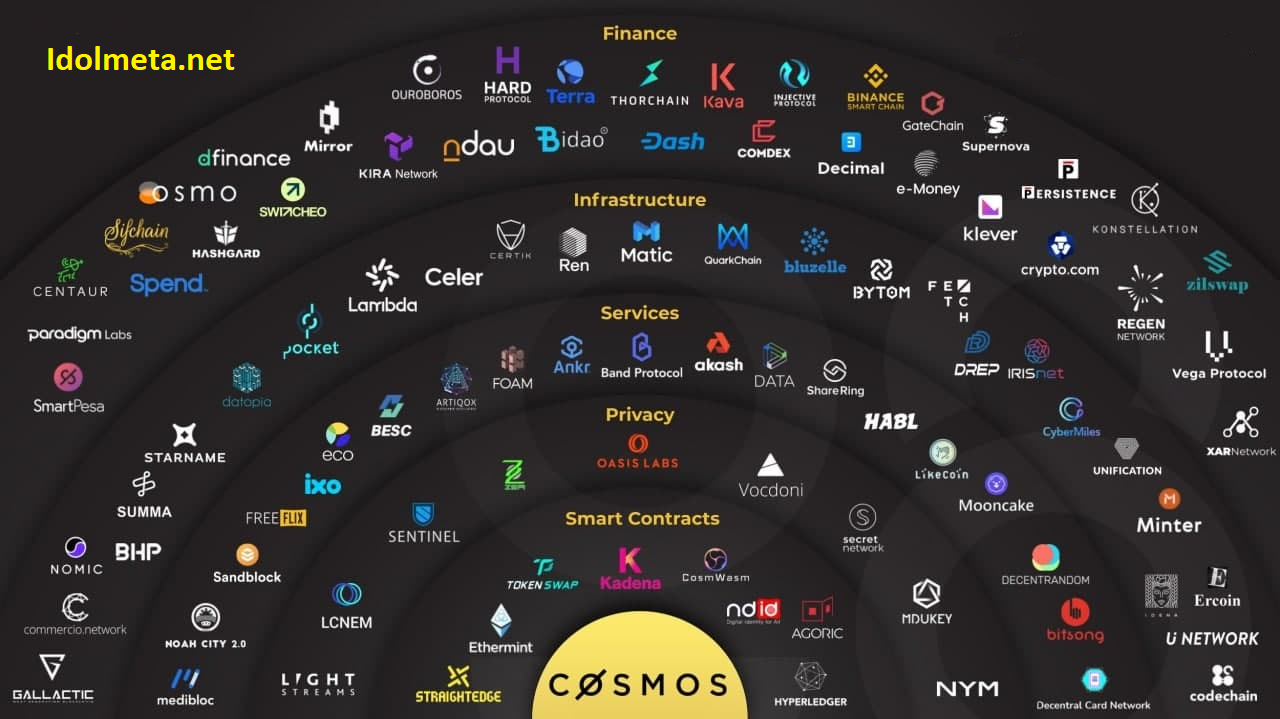 What is Cosmos Hub?

Besides developing a platform, Cosmos SDK, helps projects develop their own Blockchain. Cosmos also created its own Blockchain, which is Cosmos Hub.

The role of Cosmos Hub is very important, it is the center of Cosmos that helps connect Blockchains in the ecosystem together through the IBC bridge.

During the 4 years of IBC development, there was almost nothing on Cosmos Hub, except ATOM tokens, but when the IBC bridge is completed in March of this year, ATOM and Cosmos Hub will generally enter a new phase.

Cosmos Hub will be the hub connecting Blockchains together, so the money flow on Cosmos is pouring in here a lot.

The token of the Cosmos ecosystem is the ATOM token, which works on the Cosmos Hub Blockchain.

Number of Dapps on Cosmos

Cosmos is the first Internet of Blockchain development ecosystem on the market, so the number of Dapps in Cosmos is huge.

There are currently 249 Dapps growing inside the Cosmos ecosystem. Some prominent Dapps can be mentioned as Terra (LUNA), Thorchain, Kava, Injectives,… 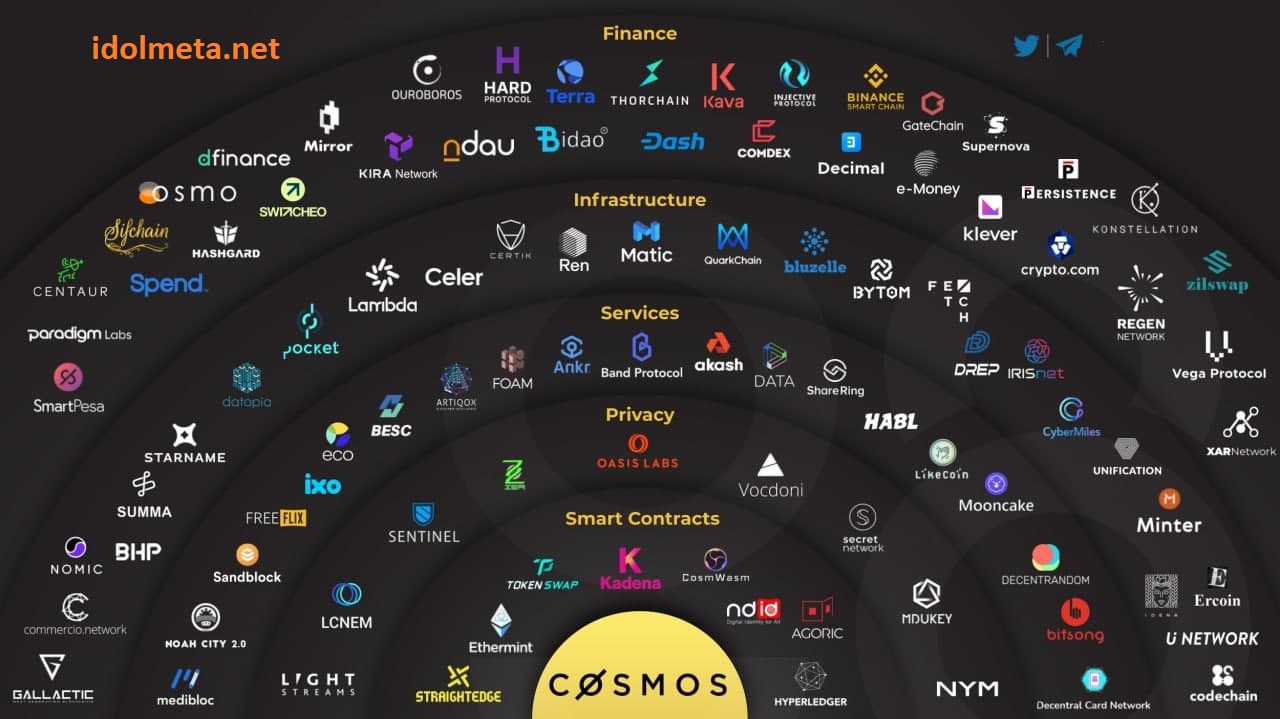 As one of the first generation Blockchain, it can be seen that Cosmos investors are longtime investors in the market.

In addition, the entire Cosmos ecosystem belongs to the PoS Blockchain (Proof-of-Stake), so many Funds in addition to investing also become Validators in the Cosmos ecosystem. These are all long-term investors with a deep connection to the project.

The biggest highlight of Cosmos compared to other Layer-1 Blockchains is in technology.

You can find the Internet of Blockchain model in many other blockchains such as Polkadot, Avalanche, Polygon. However, besides launching earlier, Cosmos also takes a different approach to this than its competitors.

In Polkadot, Avalanche, Polygon, they will focus on connecting between Chains first ⇒ Building Main Chain ⇒ Expanding to other Chains. In Cosmos, small blockchains were developed 4 years ago ⇒ Cosmos then built a Bridge to connect later.

And when Cosmos completed the IBC Bridge last March, Cosmos has completed 100% of its roadmap in 4 years, and the Internet of Blockchain era on Cosmos has begun.

⇒ Cosmos is faster in the race of the “Internet of Blockchain”.

Cosmos recently updated on the upcoming stages of Cosmos Hub. After completing the Internet of Blockchain model, the next phase of Cosmos will be towards: 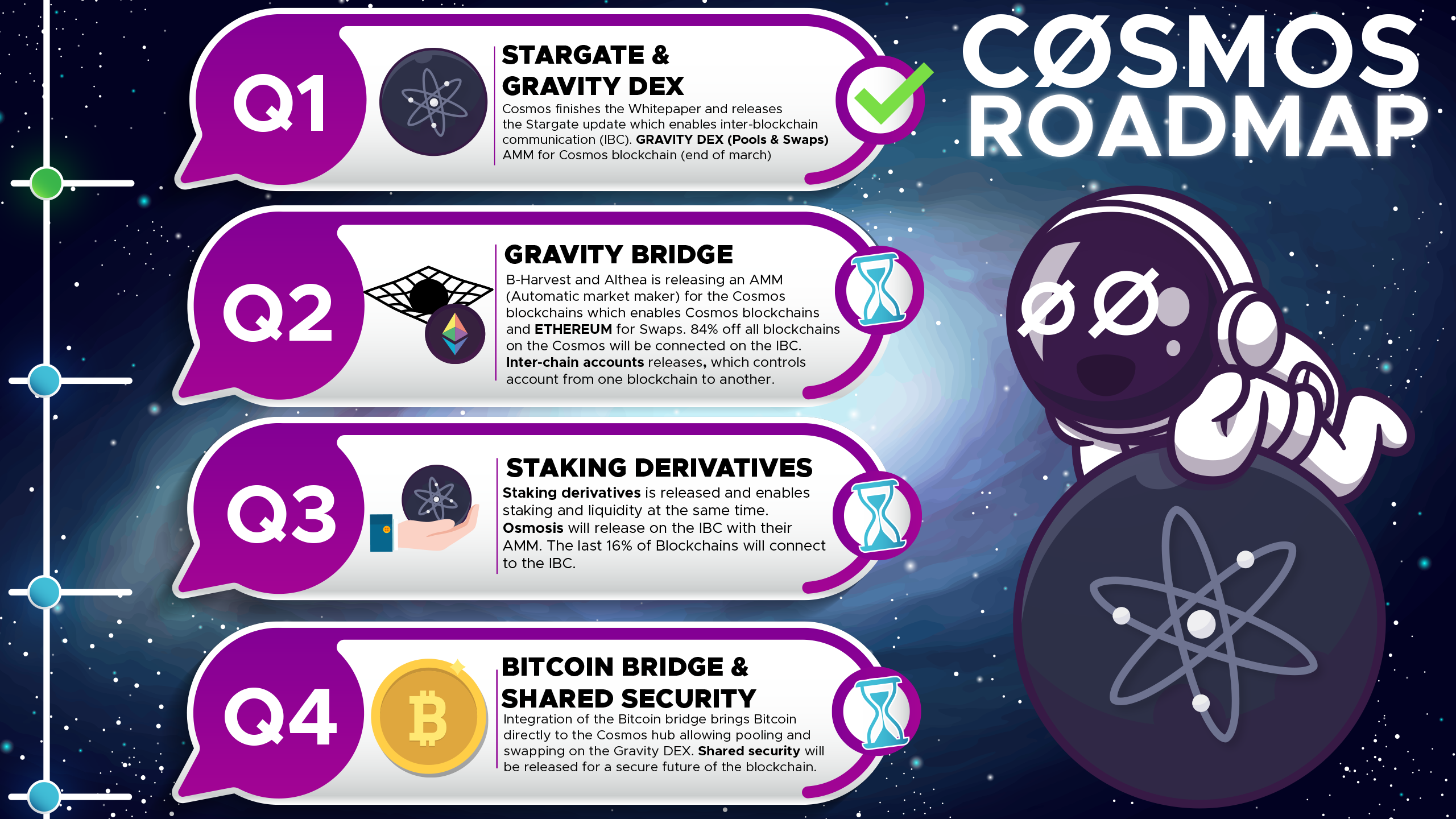 Fragments of the Cosmos ecosystem

If with Polkadot, the whole system is just waiting for the Parachain auction, then with Cosmos Hub, the breaking point is IBC.

The puzzle pieces connected to the IBC bridge

IBC Bridge (IBC Bridge) is an Interchain bridge, connecting blockchains in the Cosmos ecosystem together.

This is the best Bridge on the Cosmos ecosystem, helping to circulate the value stream throughout the system.

The number of projects connected to IBC tells us the cross-chain power on Cosmos.

Currently, there are more than 15 projects associated with IBC, in which there are 8 outstanding projects including: 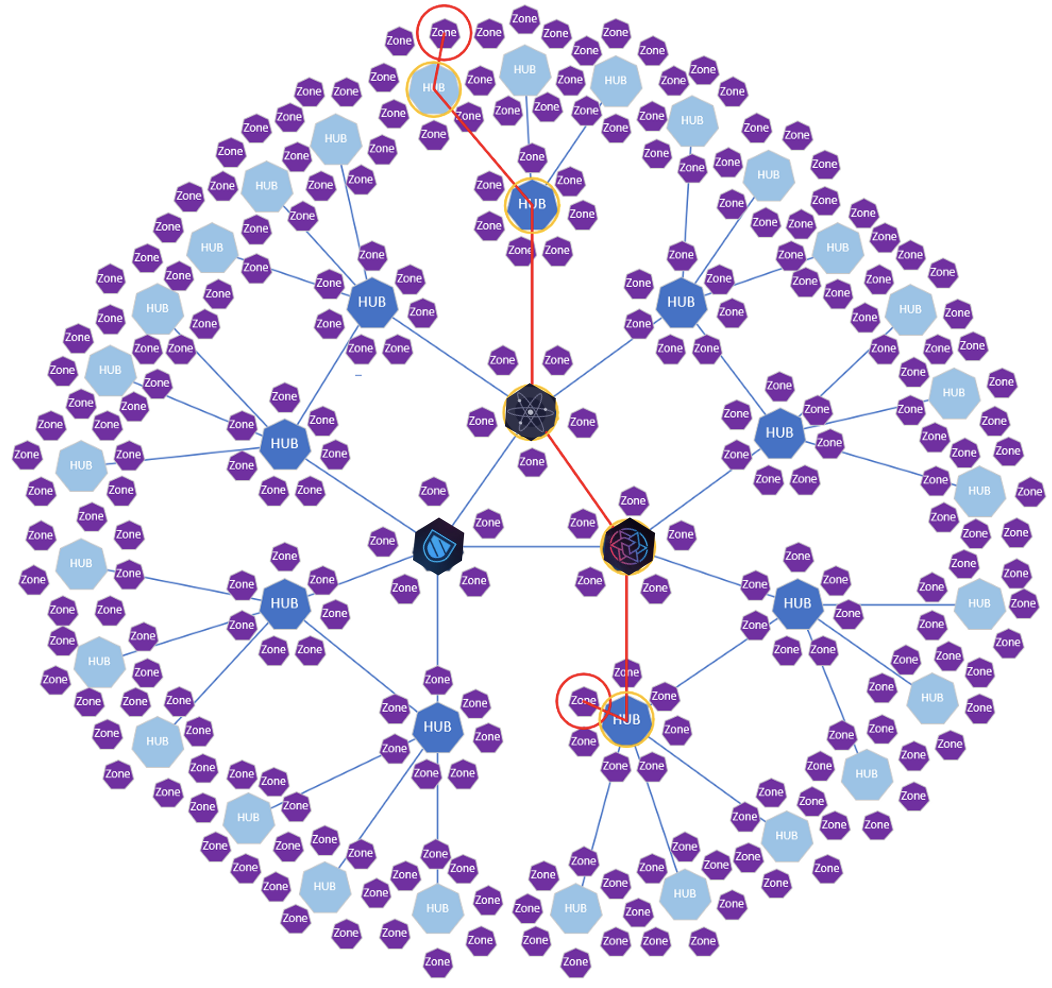 Iris is the first project connected to IBC, and one of the few projects directly invested by Tendermint Ventures – Cosmos’ Investment Fund. However, the ecosystem on Iris is quite small, with only 2 projects: Coinswap (an AMM) and Upstick (an NFT Marketplace).

Akash Network: A secure, transparent and decentralized cloud computing marketplace that connects those who need computing resources (clients) with those with computing power to rent (providers).

And some featured products

Persistence: An ecosystem of financial products, for both retail investors and large financial institutions.

Persistence hopes to be able to bridge the gap between decentralized finance and the traditional economy, and help develop DeFi applications in the field of NFTs.

Cronos: A decentralized and open-source public blockchain of Crypto.com – a decentralized exchange similar to Binance, it is built on top of the Cosmos SDK.

Regen Network: A solution to apply blockchain technology to areas that help improve the earth’s environment such as agriculture, climate, water, commodity trading,…

Sentinel: A network layer that provides P2P, decentralized applications, and marketplaces. Sentinel allows anyone to create Public and Private networks. It allows their customers to become suppliers and consumers in the network.

It is a Web 3.0 layer that addresses data, reliability, and quality issues of data information for Web 3.0 applications. Bandchain is currently the 2nd largest project in the Oracle array, after Chainlink.

The more projects connected to IBC, the stronger the Cosmos ecosystem will be, you should pay attention to these projects.

The puzzle pieces grow strongly on their own

Besides the Cross-chain value stream on Cosmos, you should also pay attention to individual Blockchains, these Blockchains with strong potential have built their own ecosystem. 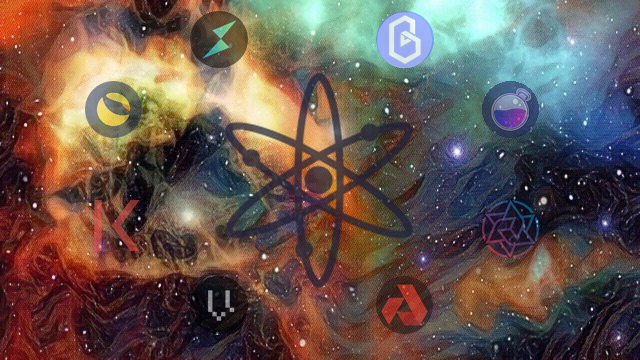 This is the blockchain on Cosmos that had a Smart Contract exactly 1 year ago. In Terra, projects all use UST, there aren’t any other traditional Stablecoins here (USDC, USDT,…). 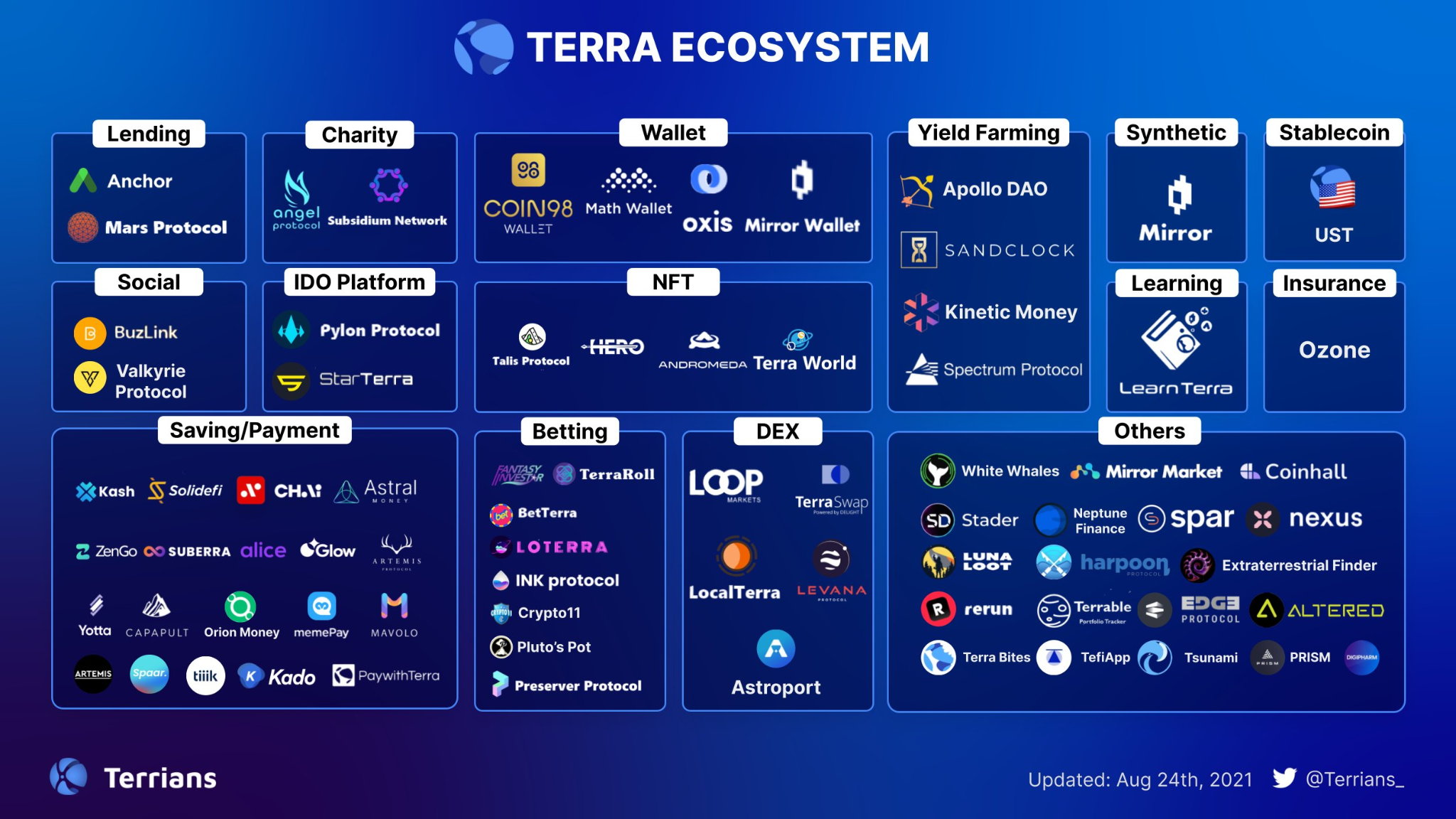 THORChain was originally built as a Cross-chain DEX, and upon completion of Thorswap, Thorchain has continued to grow into an ecosystem.

Below is the current Thorchain ecosystem. Since the initial features are quite suitable for building a DEX, most of the projects on THORChain are AMM:

The Kava ecosystem currently has a number of dapps for the Kava team to do:

As can be seen, the puzzle pieces in the Kava ecosystem are quite few. Kavaswap was launched only a few days ago.

Learn: Overview of the Kava Ecosystem

There will be many applications on it, one of which is Injective’s exchange that acts as a place to trade spot and derivative products, similar to the previous version.

In the past time, Injective has been actively connecting with many other Blockchains such as BSC, Near, Polkadot.

The Future of Cosmos

The Crypto market in general and the Cosmos ecosystem in particular are having basically very good development directions, even in the Bull or Bear period, projects still make great efforts to develop.

Currently, Cosmos is completing the Infrastructure section, which is the foundation for future development of Cosmos.

Here are some notable milestones on the Cosmos ecosystem that you should pay attention to in the near future:

Some investment opportunities on Cosmos

In fact, there are quite a few investment funds and KOLs that appreciate Cosmos’ model such as Multicoin Capital, Framework Capital, Messari Research,… but that’s about the technique.

In terms of investment, the entire value on Cosmos is almost not given to the ATOM token, so ATOM, although better, still seems to be outperformed by competitors such as DOT, AVAX, MATIC.

The Cosmos team also realizes this, and there are more and more applications for ATOM tokens such as transaction fees, liquidity pools, Interchain Staking, etc.

I personally believe that the price will return to the right price value of the project.

Please register and join idolmeta.net groups and channels below to discuss with admins and other community members. 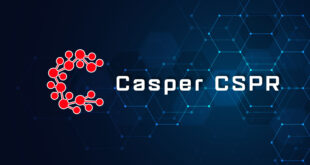 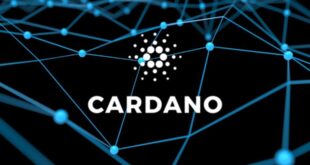 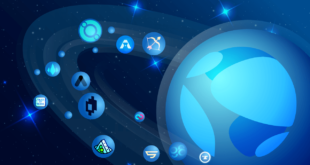