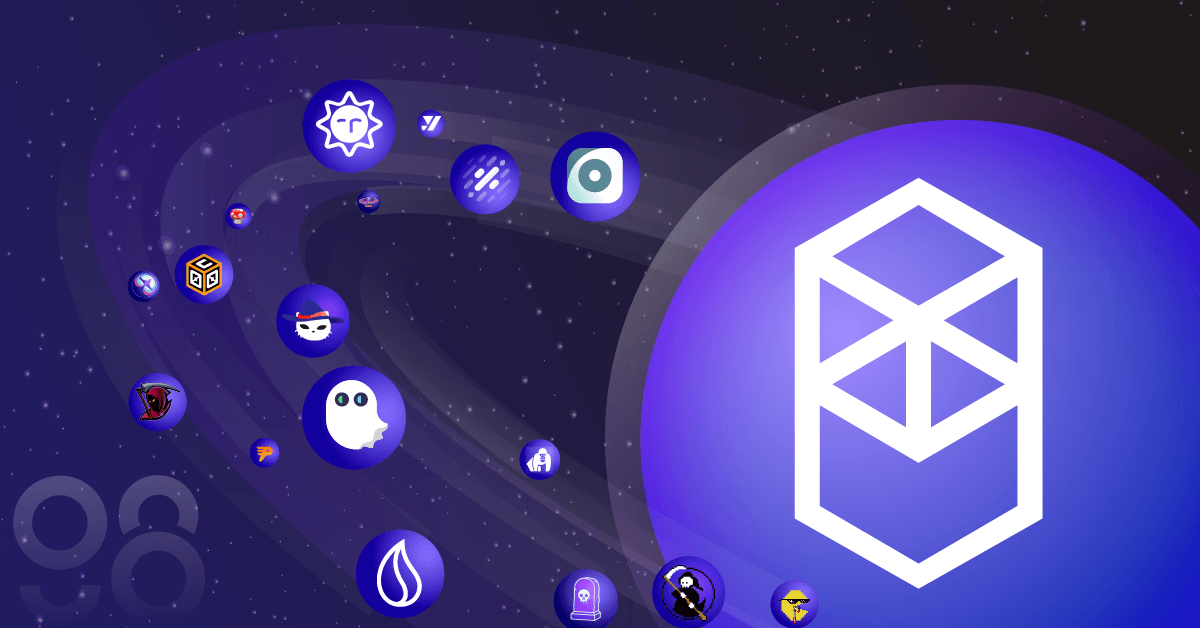 Overview of the Fantom ecosystem (FTM) with each piece and project inside, from which to project the future and look for investment opportunities.

In recent times, Fantom is one of the fastest growing ecosystems in the DeFi space in the crypto market.

In this article, I will analyze with you from overview to details about Fantom ecosystem, which will include:

Fantom Opera chain is a blockchain created based on Fantom’s core protocol, Lachesis Protocol. It has 3 layers:

In addition to its application in the crypto and DeFi markets, Fantom is also a blockchain with applications in businesses and governments. This direction helps Fantom blockchain to increase its presence and application even more. 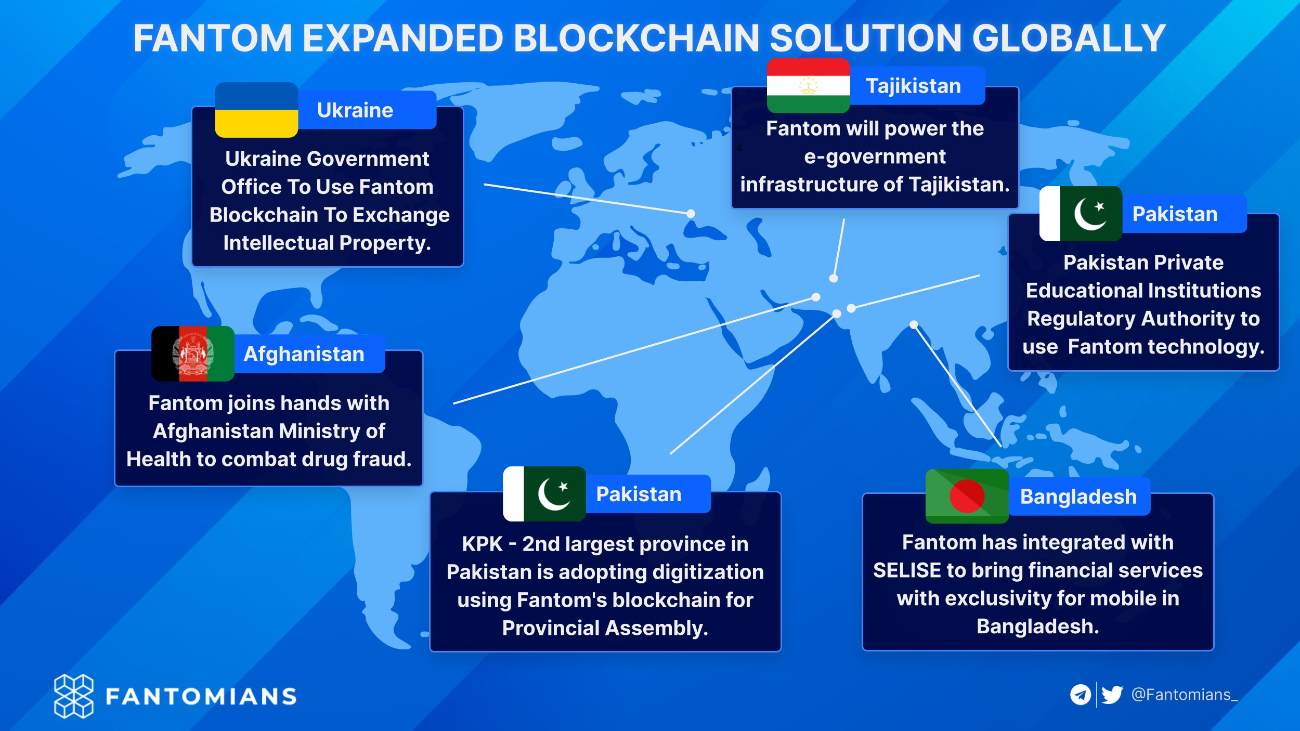 Fantom has the following highlights:

At the end of 2019, Fantom Opera launched the Mainnet.

The first two quarters of 2020, the Team focused on infrastructure development, integration and establishing partnerships. You can find out more here.

Starting in Q3/2020, Fantom has begun to focus on building DeFi with the launch of “Fantom DeFi”.

This is a sign that many developers from other systems as well as users are moving to the Fantom ecosystem.

However, Fantom entered the “trail” of the BSC system after DeFi entered the saturation phase. Since then, Fantom TVL is showing no signs of growth.

Fantom is trying to break the saturation phase of DeFi, but there are not many outstanding improvements. The BSC system looks to the growth of NFT, GameFi and Metaverse, while Fantom has just stopped at NFT, has not improved NFT into Interactive NFT to apply them in GameFi and Metaverse. 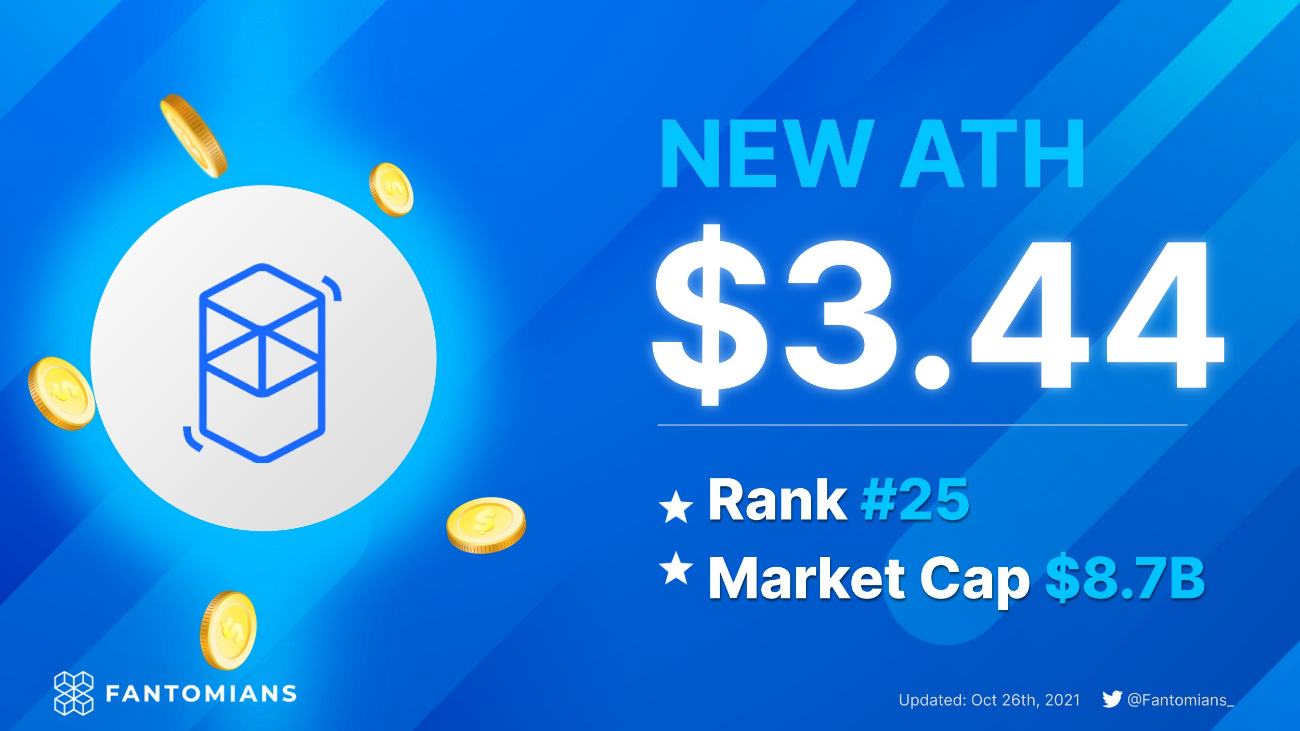 This helped Fantom’s Market Cap reach $3.7 billion, rising from #100 to #38 in just 1 month. This is definitely a worthy reward for those who believe in the true ability of Fantom.

This is a strong growth that helps Fantom enter the top 10 largest DeFi ecosystems but still shows weakness against some ecosystems such as Solana, Terra, Avalanche – this is the biggest competitor at the moment. . Even further to reach the top 5, these are the 5 ecosystems that have stood very firmly in the past 4-5 months and have not had any competitors to surpass. 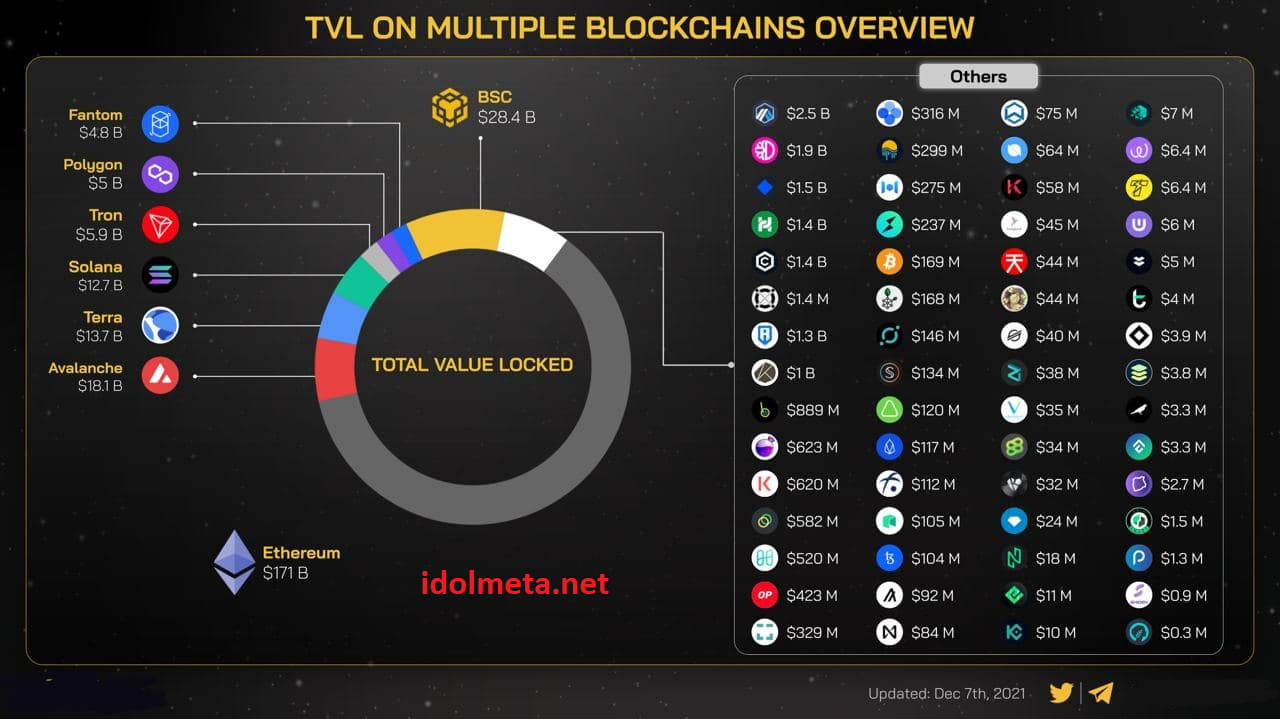 DeFi TVL comparison table of ecosystems in the market.

In addition to Andre Cronje, Harry Yeh, the conference was attended by Binance and many other partners. This shows that Fantom is one of the ecosystems with a wide network and a larger vision of Fantom development in the future. 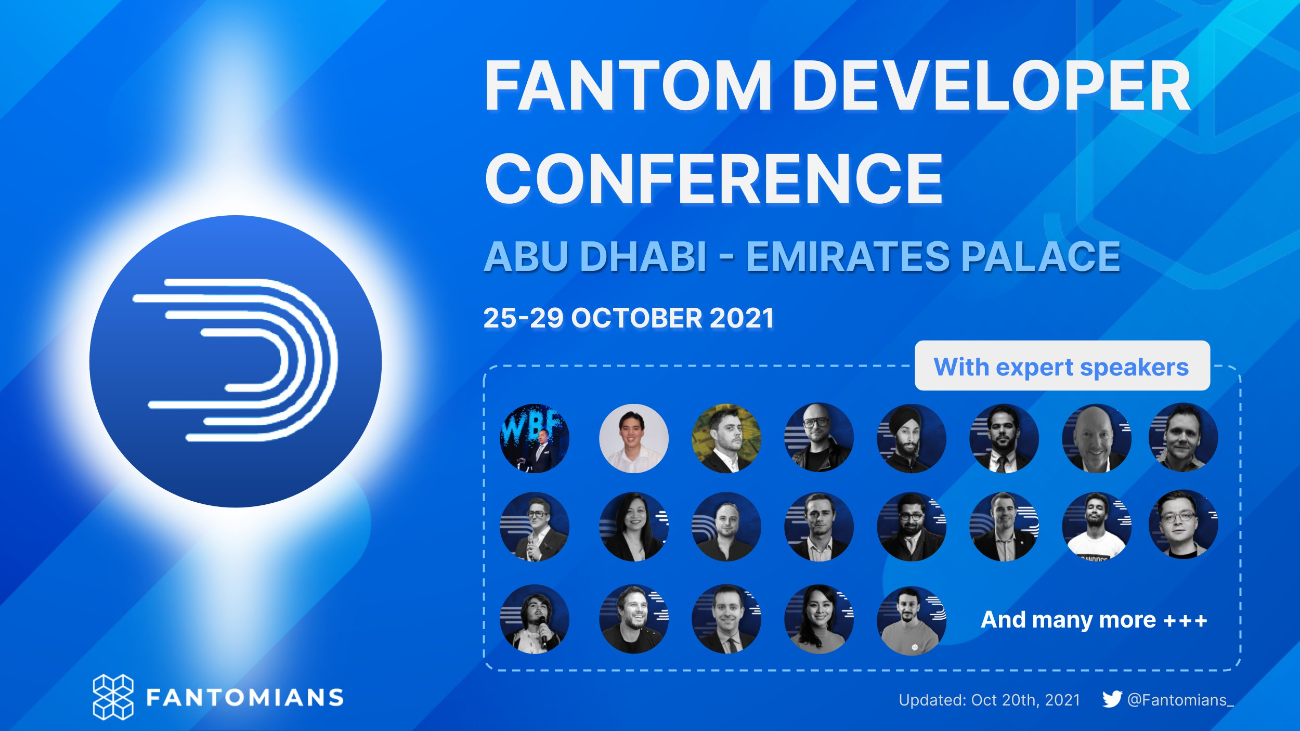 Up to now, Fantom has about 200 projects in the DeFi space. However, the number of outstanding projects is less than 50 projects. This shows that the growth and development of projects in the Fantom ecosystem is uneven, making Fantom’s DeFi ecosystem still unable to thrive.

To improve this problem, Fantom has launched the “Fantom Ecosystem Spotlight” program with Fantom Incentive Program worth $370 FTM (about $550 million), both supporting development projects and increasing Trust for DeFi Users when using Fantom dApp. 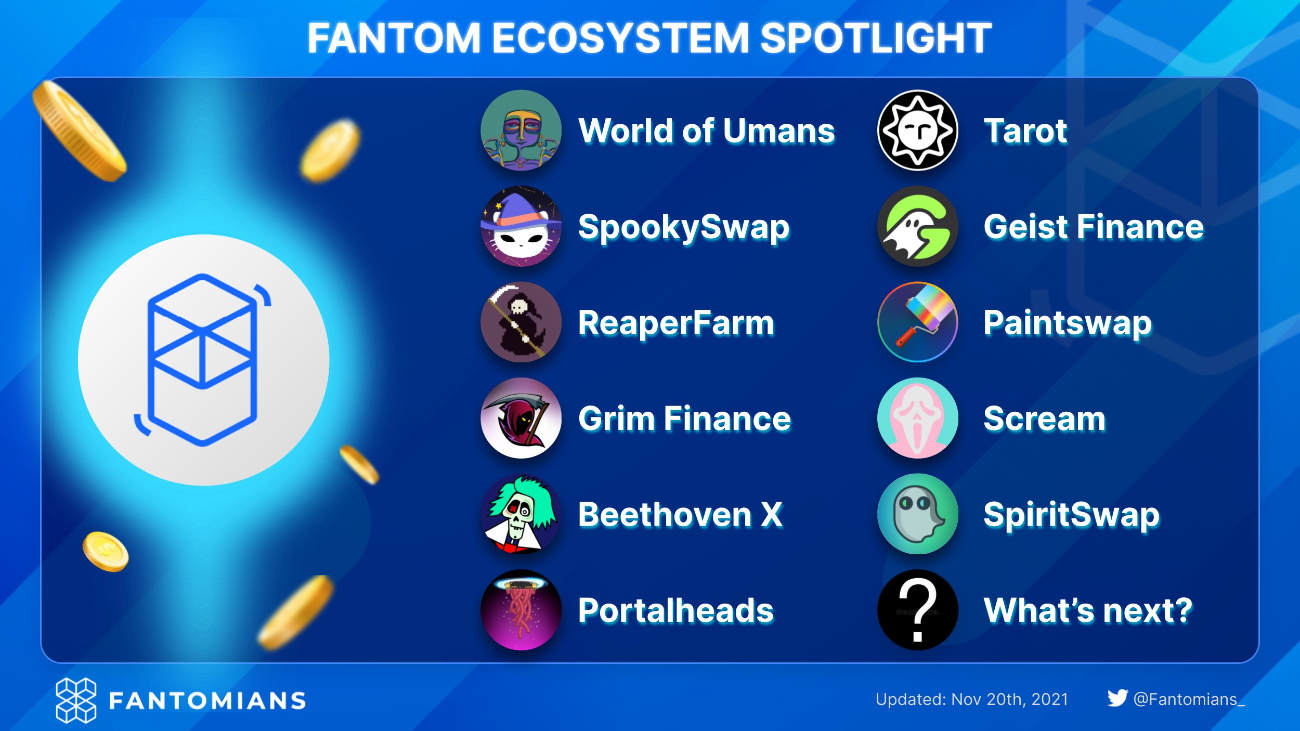 If you are interested in the Binance Smart Chain ecosystem, BSC also has a program “Binance Project Spotlight” to encourage development projects and increase trust for DeFi Users.

Since adopting that program, Binance has grown rapidly in terms of the number of projects, the quality of the projects, and the number of DeFi users on the BSC ecosystem.

On August 30, 2021, Fantom announced that it will provide Incentive for projects developed on the Fantom ecosystem, with a total reward of up to 370 million FTM (equivalent to about 290 million USD).

This is huge news, possibly the most prominent of the month, helping Fantom start racing with other ecosystems in such an exciting time.

With such bloody names, the upcoming race promises to be very intense and this is a very right step for Fantom if they do not want to miss this DeFi race. 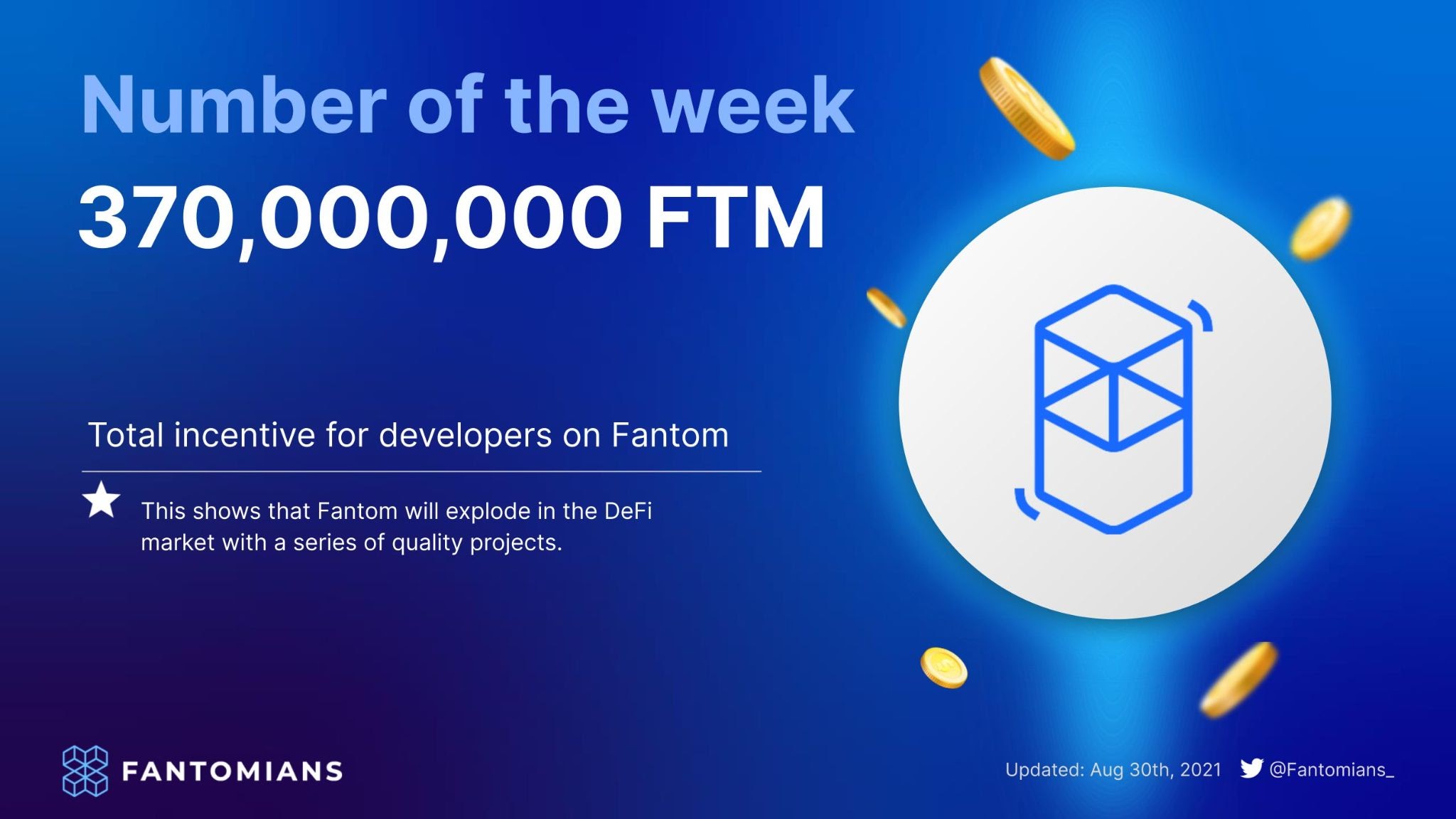 Fantom launches Incentive Program with a value of up to $370 million FTM. Source: Fantomians.

Analyzing each puzzle piece in the Fantom ecosystem 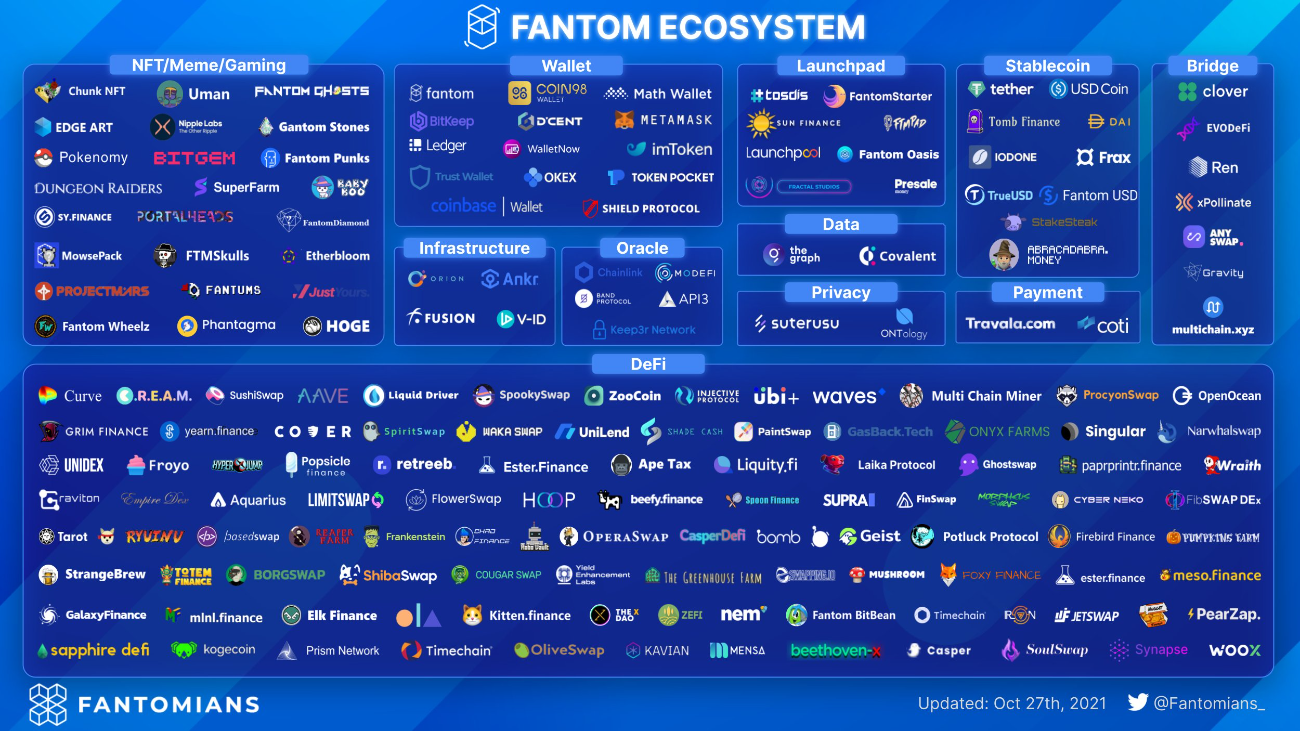 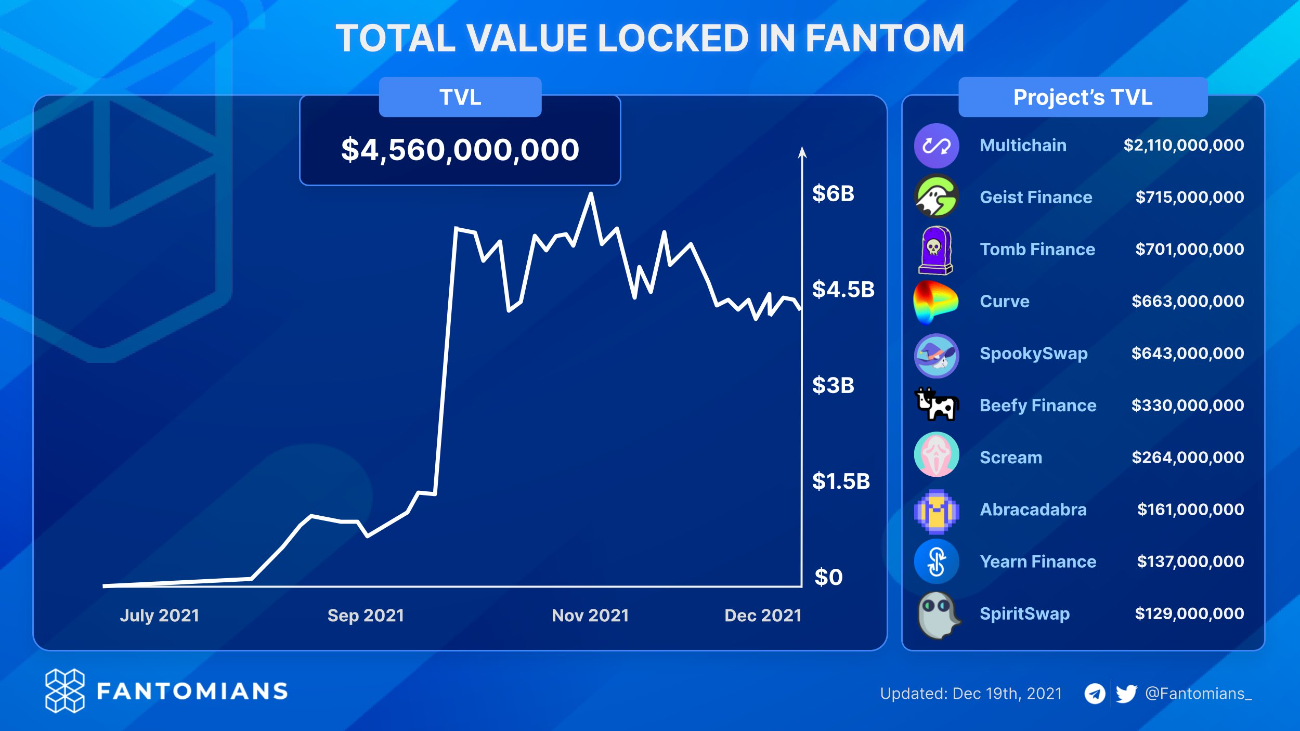 Good and stable infrastructure is one of the most important factors for the development of the ecosystem.

If you pay attention to the SBC system, they have focused on the first 1-2 months from September 2020 to develop infrastructure.

For example, linking with ChainLink and Band Protocol to use Oracle, linking with CertiK and Peckshield to increase security,… Mapping through the Fantom system, I see that they build slower than BSC, but they still often regularly updated.

Here are some of the partners they have linked: 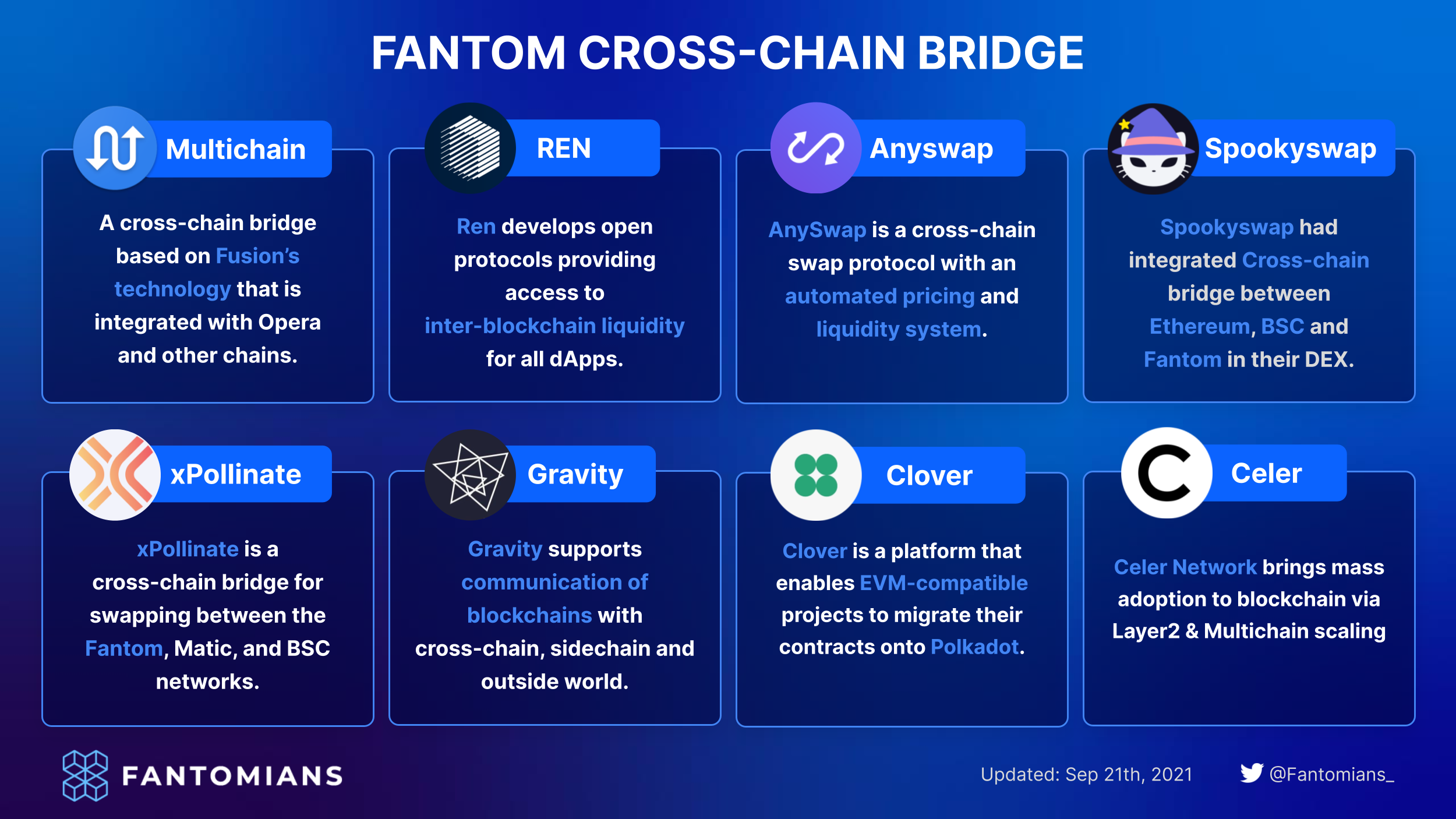 Cross-chain Bridge is one of the most important areas for money flow between ecosystems. Currently, Fantom has 7 main Bridges, Spookyswap’s Bridge uses Anyswap’s technology.

However, the limitation of Bridges is to attract both sides of the network, which makes many people still use CEX exchanges as a Bridge.

To solve this, Anyswap pioneered the free one-way Bridge from Ethereum to Fantom, making it easy for users to transfer funds to Fantom. 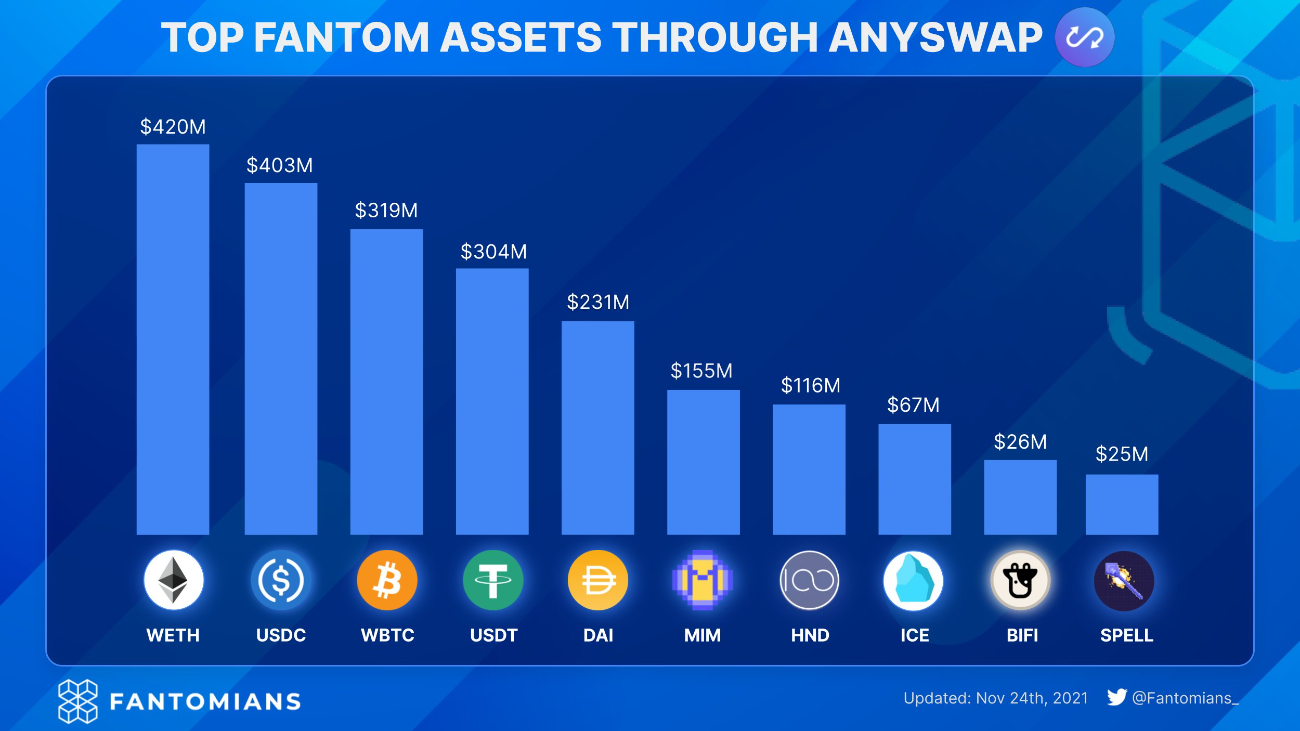 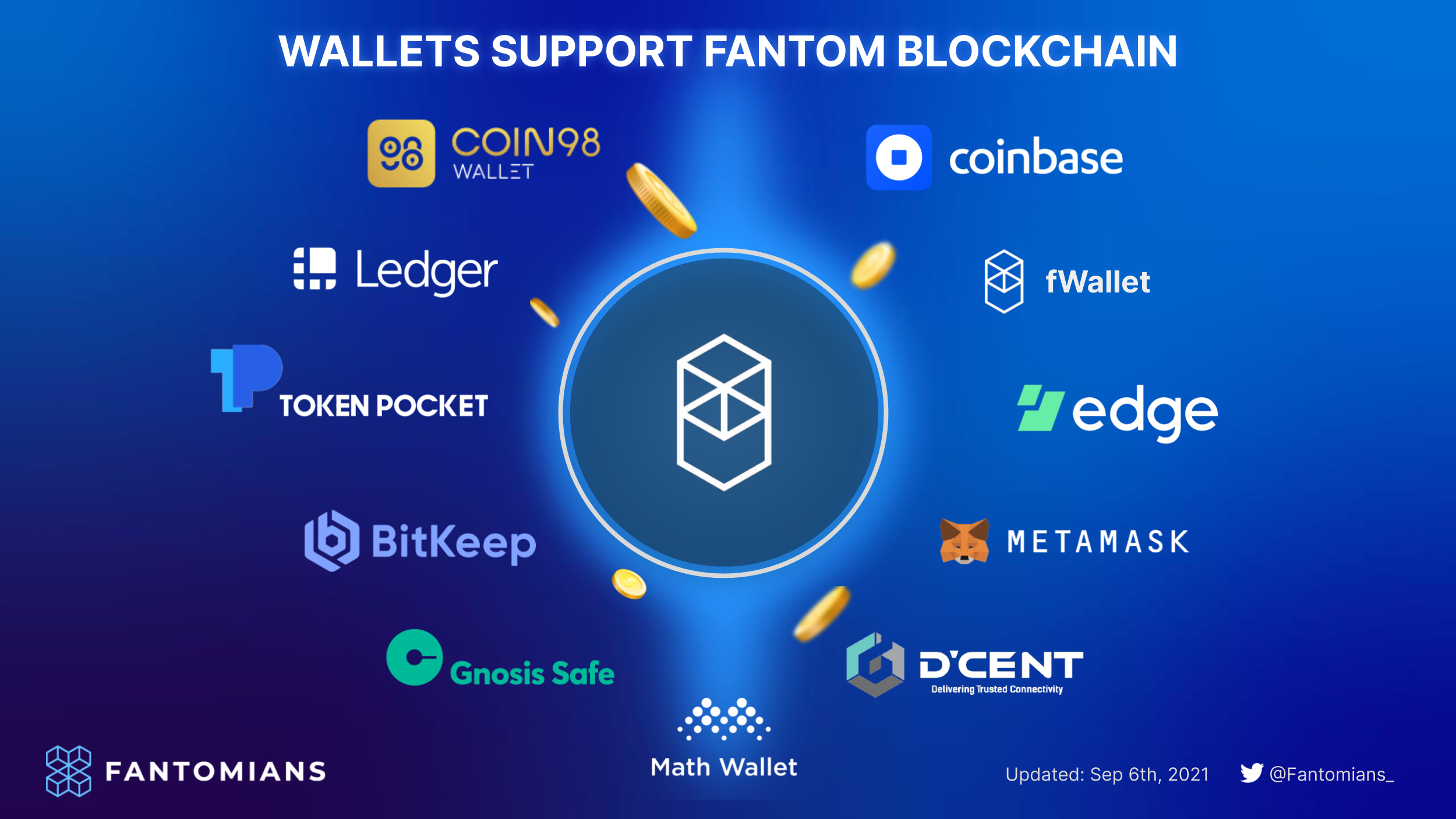 Since May 2021, Fantom has linked 3 more wallets including Coin98 Wallet, Dcent and BitKeep.

Having the advantage of being EVM blockchain, Fantom can easily be stored and interacted with many different wallets thereby attracting users and increasing Fantom’s recognition.

And Coinbase Wallet has supported Fantom Opera Blockchain from about June – July 2021. However, until now, they have only informed the community. This has been mentioned in the Fantomians Twitter channel before.

Currently, Fantom has been listed on 25+ large and small exchanges such as Binance, FTX, Gemini. Coinbase alone has not listed FTM yet, with obvious moves, it is entirely possible for FTM to be listed on Coinbase.

Read more: 04 important criteria to get listed on Coinbase

The AMM segment is currently the most prominent segment and accounts for the largest cash flow, in which there are 3 candidates, Curve, Spiritswap and Spookyswap. 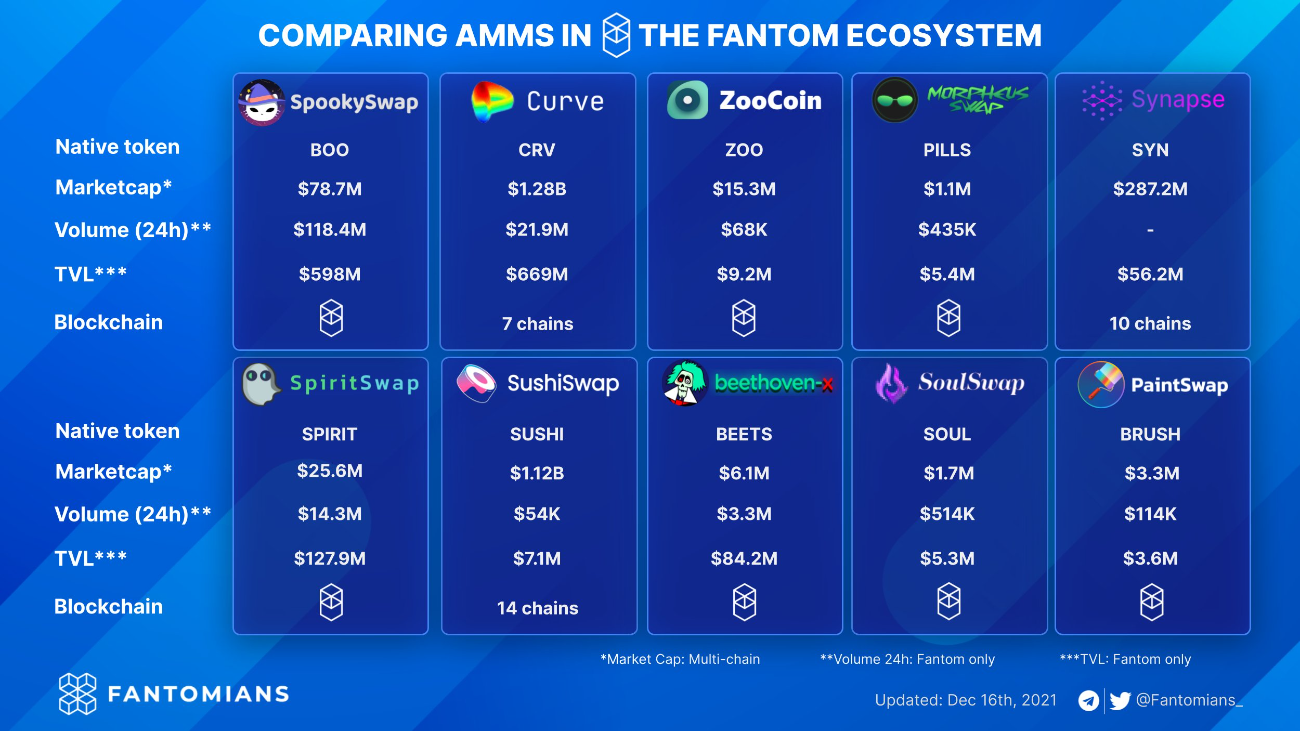 By the way, I will also answer the question: Why is Spookyswap and Spiritswap growth more important than Curve Finance?

First of all, you need to understand that Curve Finance is a Liquidity Pool, the growth of Curve Finance means that the cash flow in the ecosystem increases, but the increased value is mainly Stablecoins.

Previously, Spiritswap was the leader, but now, Spookyswap has risen thanks to the xBOO feature (similar to Pancakeswap’s Syrups Pool) that allows Staking xBOO to Earn other tokens. 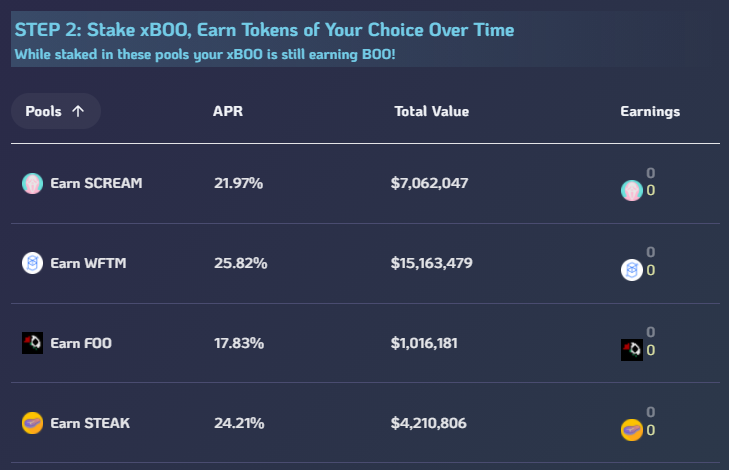 Staking program xBOO to receive other tokens from Spookyswap. 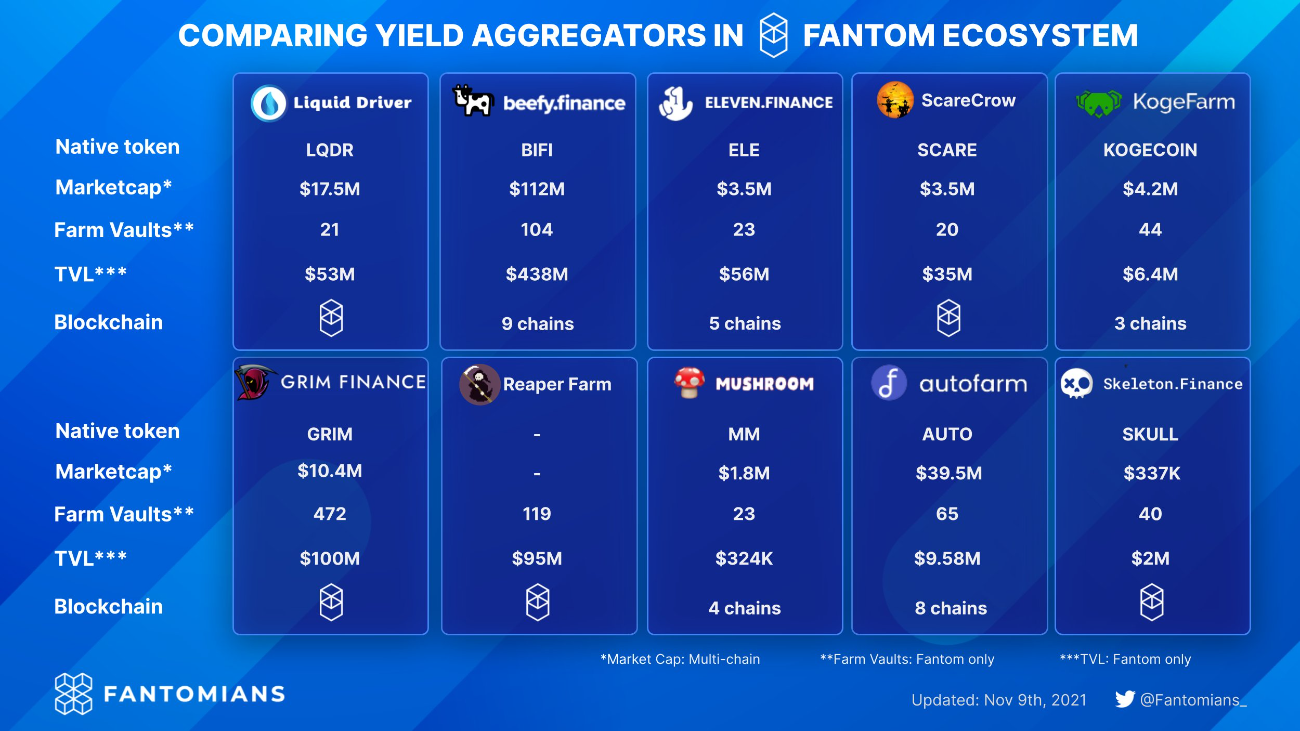 The second largest TVL market share of the Fantom ecosystem is the Yield Aggregator Platform.

This is an area that has a very close cooperation with the AMM Liquidity segment. Most AMM Liquidity Pools are utilized by Yield Aggregators, especially Spookyswap and Spiritswap Pools.

Among the total number of Yield Aggregator Platforms, Beefy Finance is the largest platform with TVL up to $ 109 million, overwhelming compared to the remaining pools.

Next is Reaper Farm with a TVL of $35 million, the highlight of Reaper Farm is having the largest number of Pools, up to 86 pools and supporting almost all assets of the Fantom system. 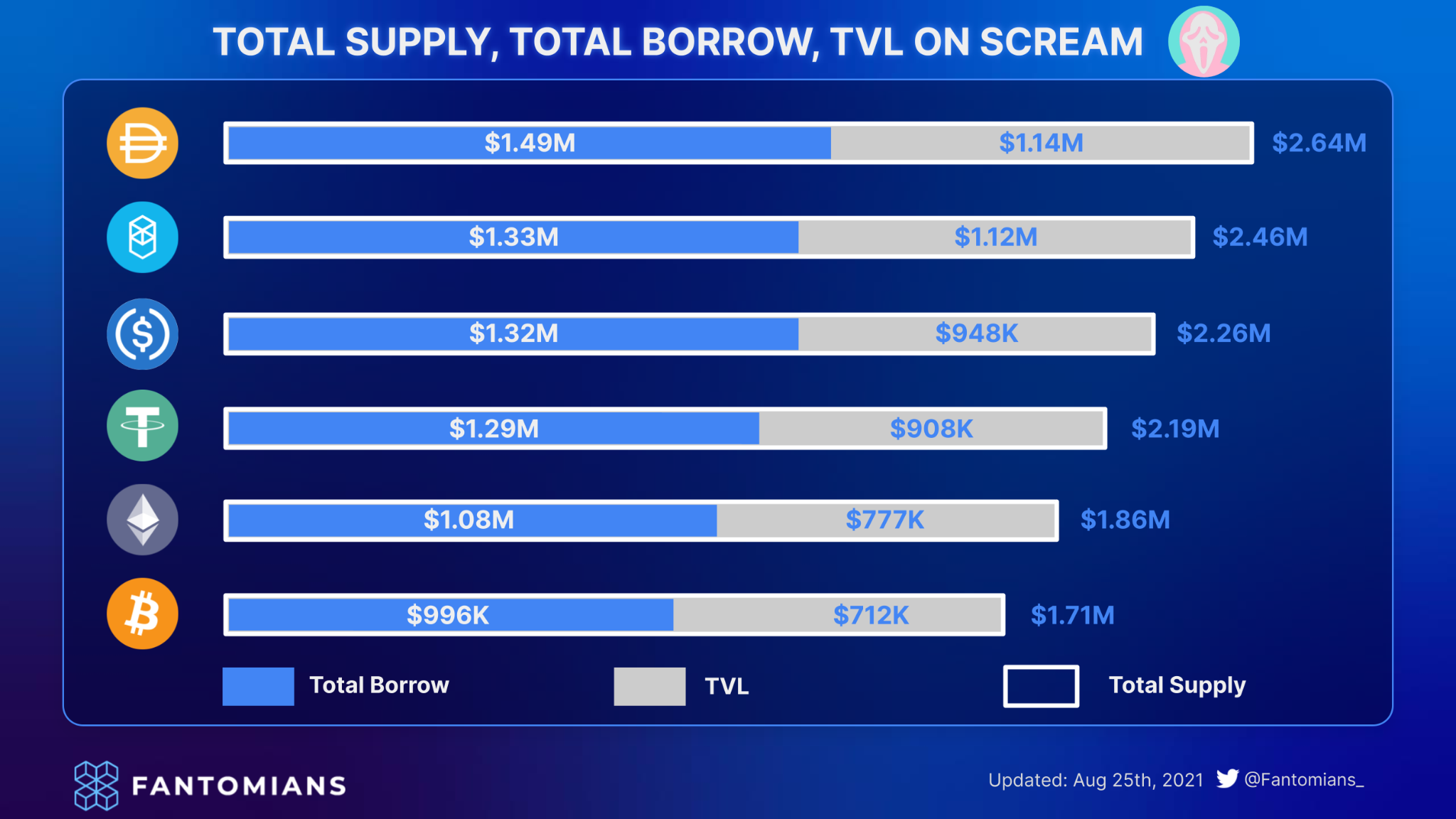 Lending is a relatively late development of the Fantom ecosystem. Initially, the Lending array only had the Cream Finance project from the Ethereum ecosystem to expand, but it also did not have effective performance.

However, since June, the Scream project, which can be considered a Fork of Cream Finance, has worked quite effectively and has a TVL of up to $71 million, far surpassing Cream Finance with a TVL of $500 million.

The next candidate in the Lending segment is Geist Finance, in just 2 days after launching, Geist Finance has reached TVL of 1 billion USD.

This happened in the context of Fantom’s TVL increasing strongly, and Geist Finance’s Multi-sig wallet is controlled by 5 famous members in the Fantom system such as Fantom CEO, Curve Finance Founder, Spookyswap co-founder,… Therefore, Geist Finance attracts a large amount of capital. 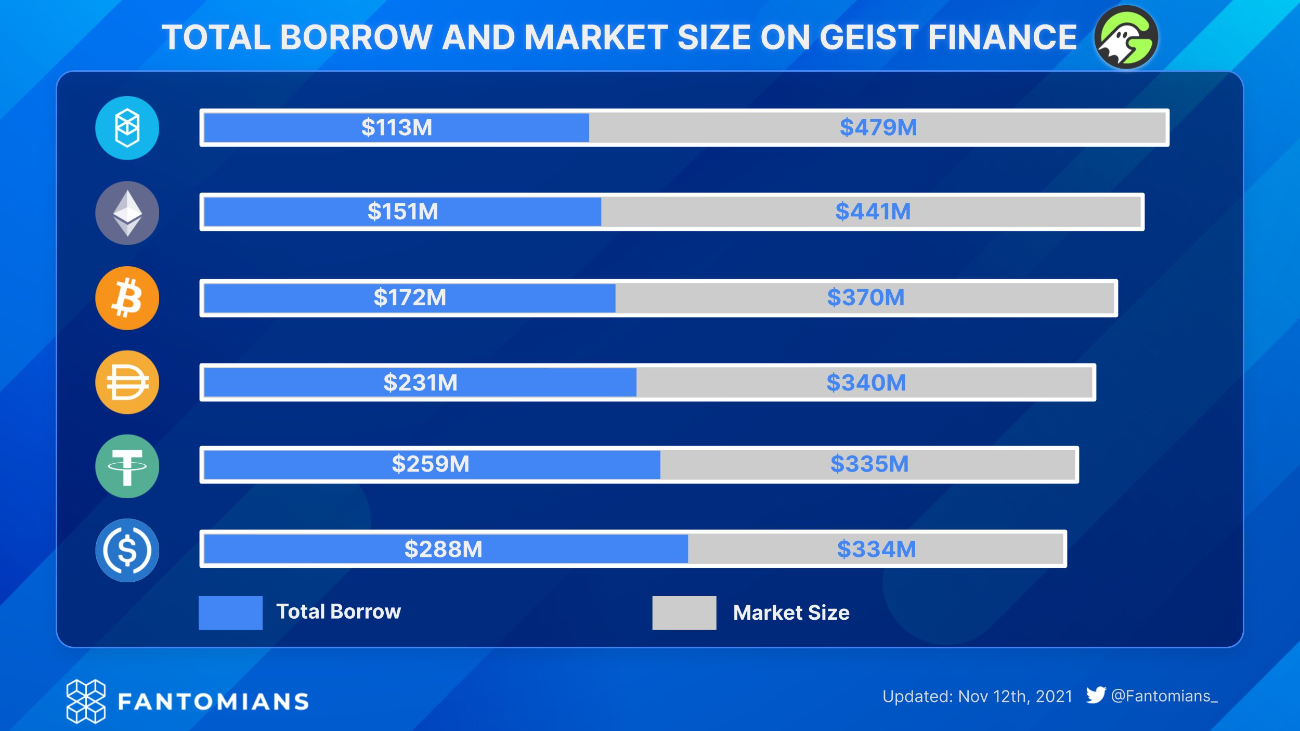 Earlier, I mentioned that NFT projects on Fantom are mostly spontaneous, there is no consensus, and there is no NFT Marketplace that really helps the entire NFT field on Fantom develop. 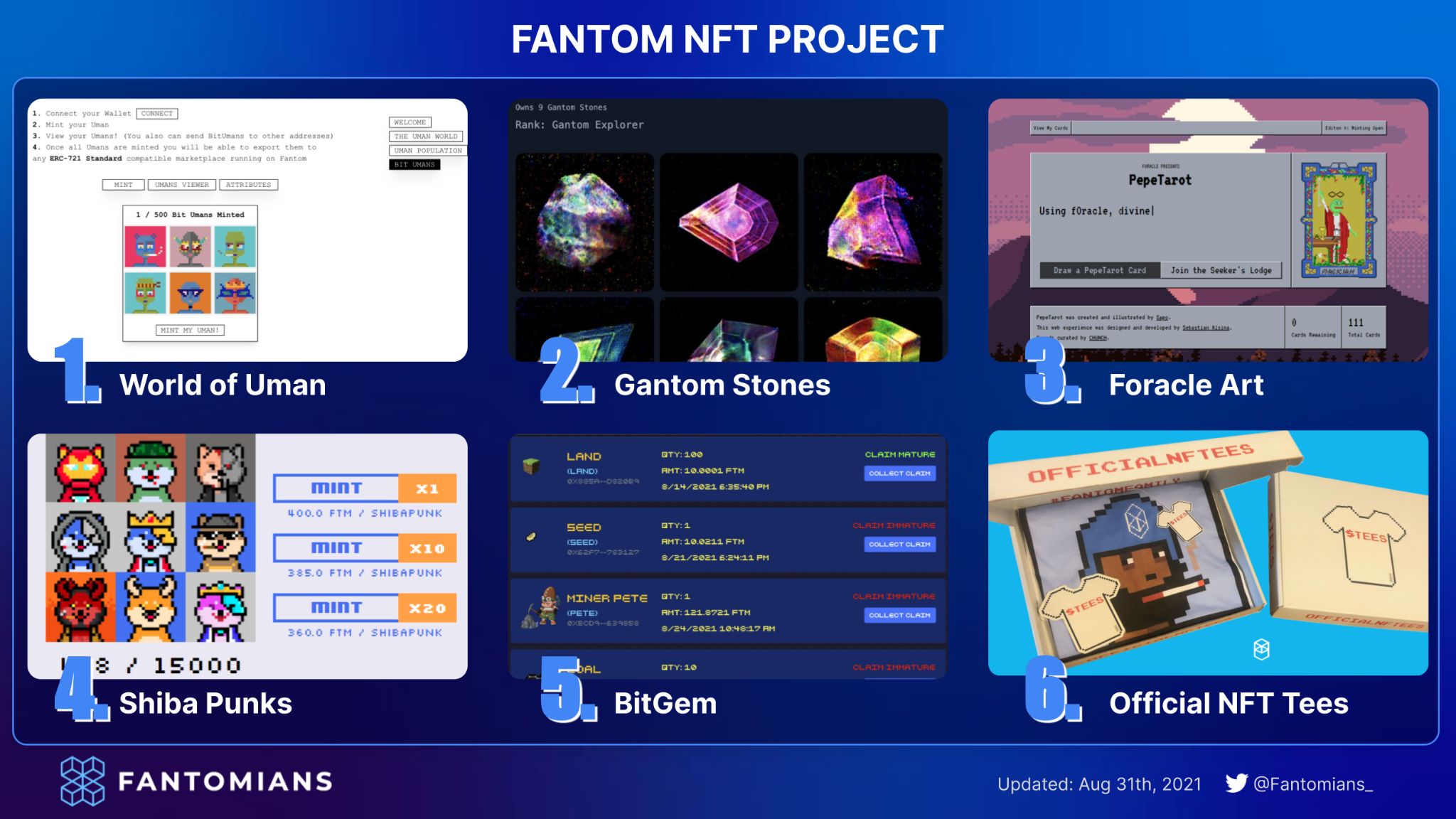 However, recently, Andre Cronje announced that he will develop the first products for the NFT field, more specifically the Artion NFT Marketplace, which helps to connect the NFT buying and selling activities of disjointed projects.

The second product that is slightly more GameFi-oriented is Rarity. Currently, Andre has not yet announced what will be inside the project. But this promises to be a project granted by Fantom Foundation and has a high reputation. 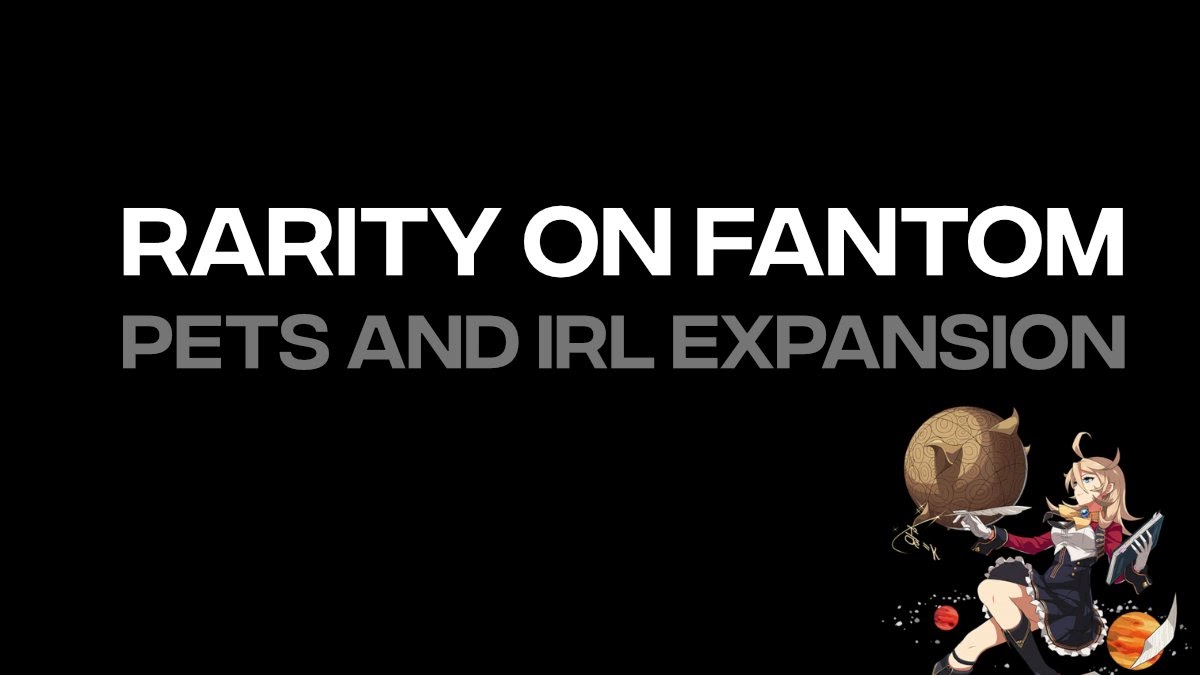 Launchpad is a very important part of any ecosystem helping to release the missing pieces of that ecosystem and somehow attracting new users into the ecosystem because Launchpad usually has very high growth after opening. token sale.

However, the Fantom system deployed Launchpad quite late, making Fantom unable to attract a large number of users in the entire market in a strong growth cycle. Up to now, Fantom has only 1 official Launchpad, FantomStarter.

Currently FantomStarter has launched 3 projects and has 3 projects to be launched next. This number is still quite low compared to the number of Launchpads and the number of projects launched on Binance Smart Chain. Hopefully Fantom Foundation will pay more attention to this area to be able to attract new users. 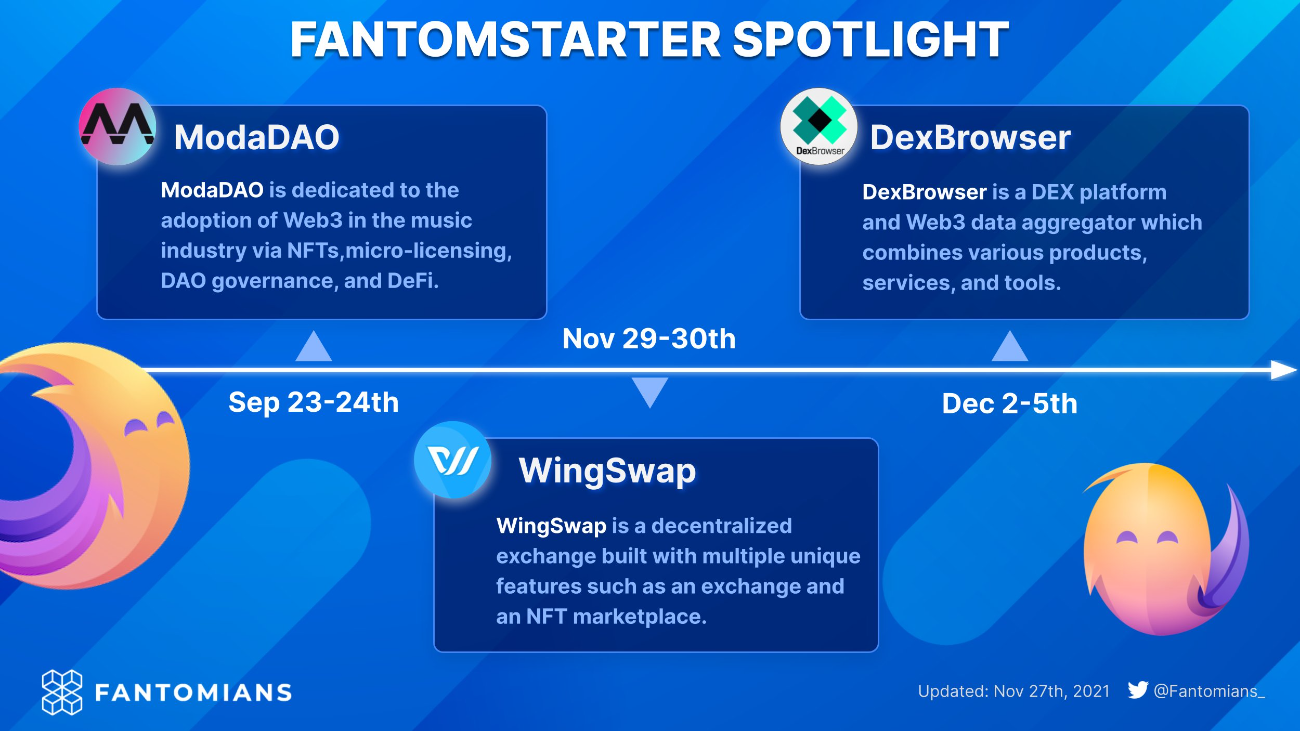 Invest in tokens of the Fantom ecosystem

Investing in tokens is one of the easiest investment approaches, but in recent times, the tokens of the Fantom ecosystem have grown very strongly, so the growth potential will no longer be high. 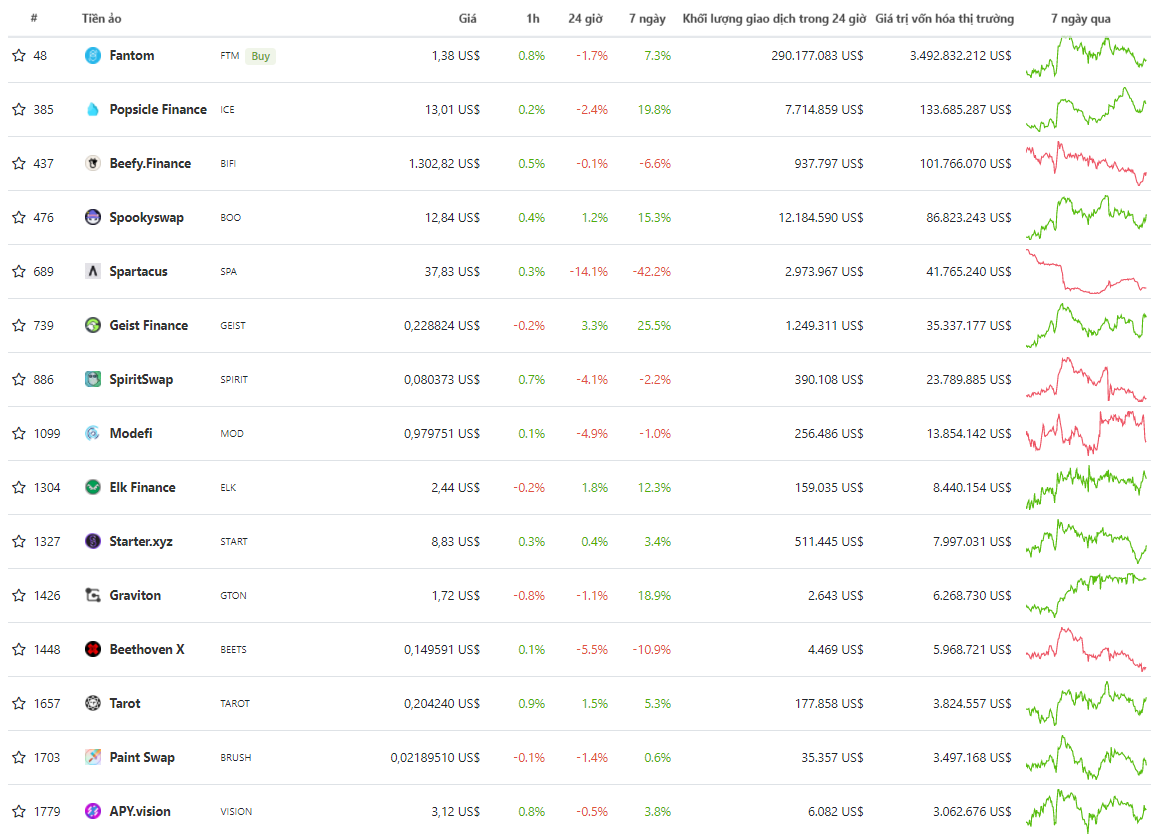 Some prominent tokens in the Fantom ecosystem. Source: CoinGecko.

Therefore, to invest in tokens in the Fantom ecosystem, you should carefully consider the performance of each project and the entire ecosystem to make the right decision.

Skin in the game into the Fantom ecosystem

Similar to the Ethereum or BSC ecosystems, Fantom also has the opportunity for brothers to Skin in the game.

However, currently, the potential level is not as high as around mid-2021, so Skin in the game is more suitable for brothers who have held tokens of the Fantom ecosystem before. 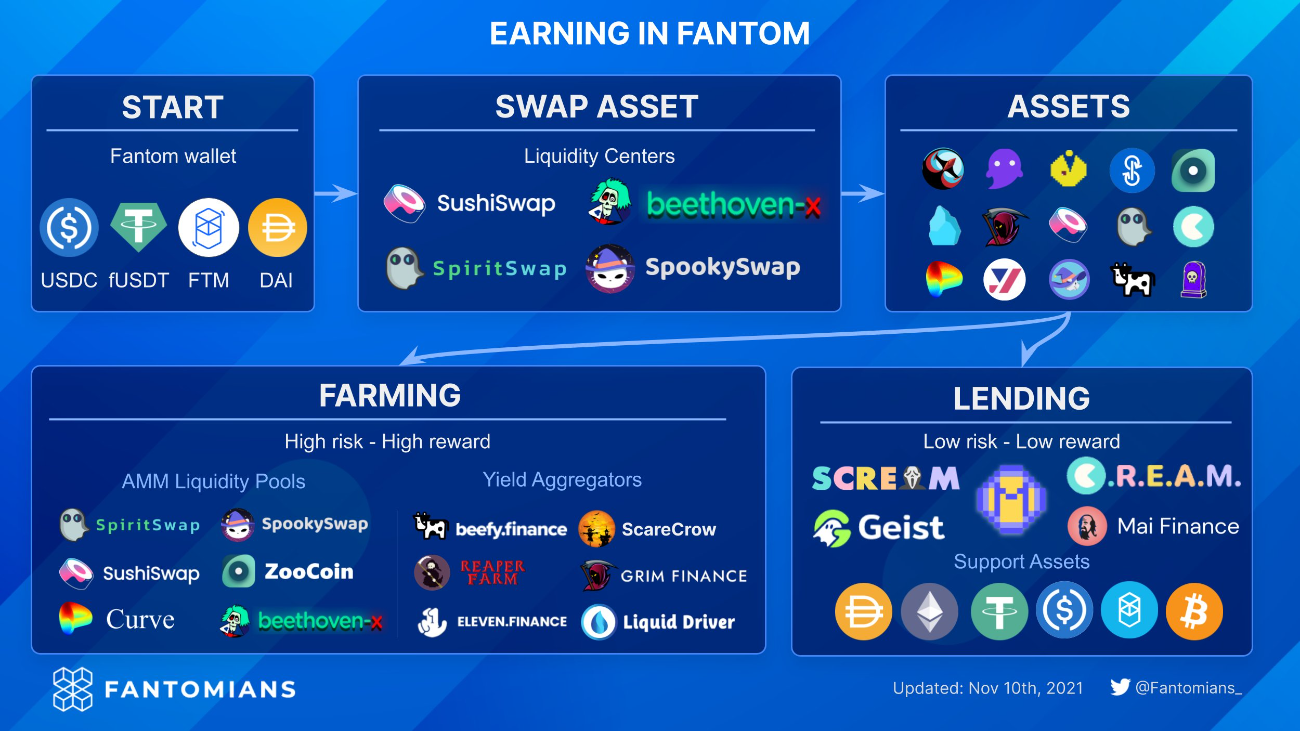 Some forms of profit optimization on the Fantom ecosystem. Source: Fantomians.

With this form, you can earn in many different ways, such as picking up the trend with tokens in the Fantom ecosystem.

If you have held tokens before, you can lend at Lending platforms if you are afraid of Impermanent Loss risk, but the return is also lower.

If you are not afraid of Impermanent Loss and want higher profits, you can farm at some AMM or Yield Aggregator. 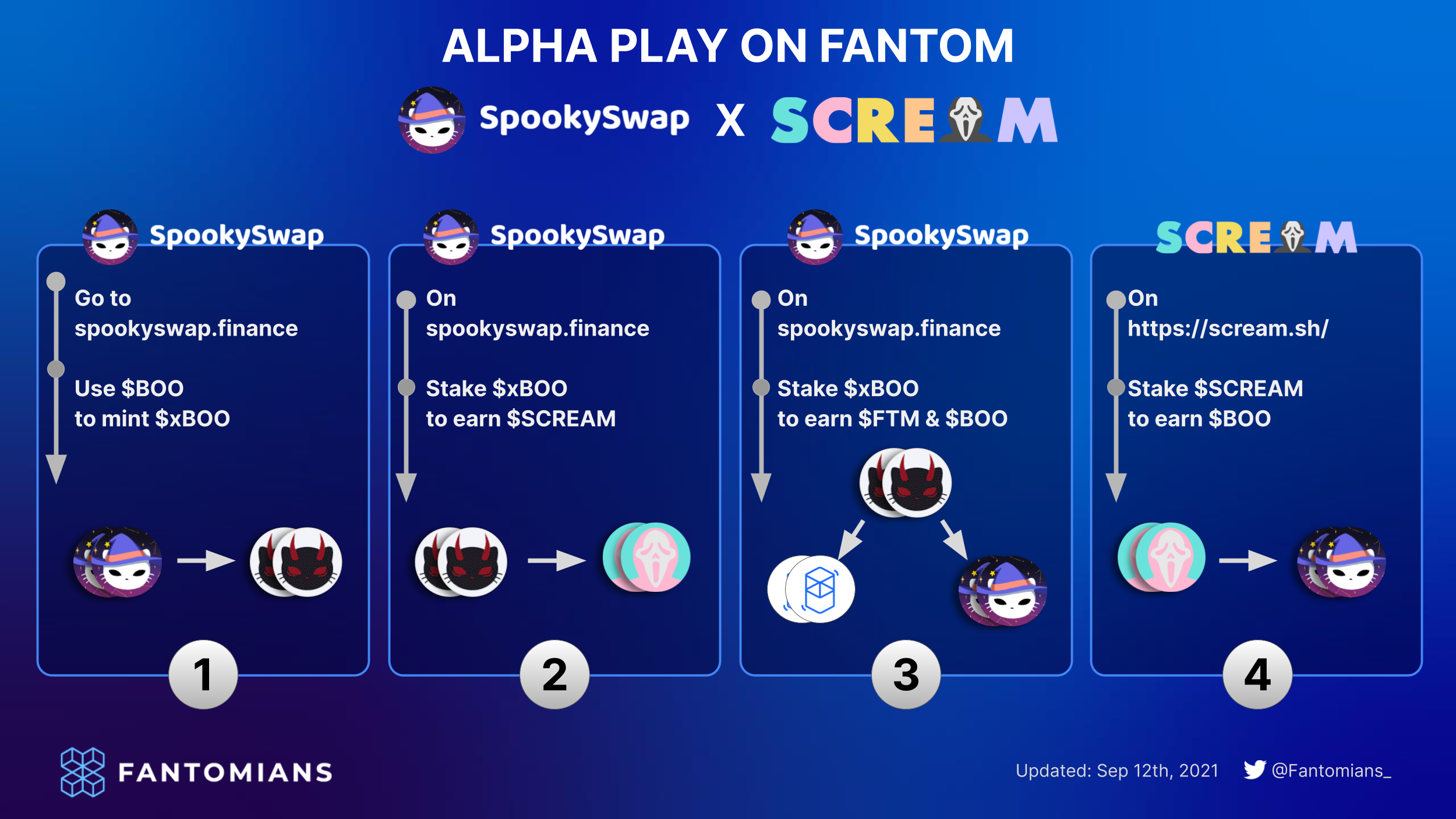 How to optimize profits when holding $BOO. Source: Fantomians.

Or if you hold BOO – token of Spookyswap, the largest AMM platform Fantom currently, you can optimize by:

In general, there will be many ways for you to optimize, but mainly for those who have held since the beginning when Fantom has not grown strongly.

“Cheap fees, fast transactions, interface similar to Ethereum” combined with the PR slogan “Ethereum Helper” Fantom scored in the eyes of the Ethereum community, plus the help of one of the famous DeFi builder in the air. time is Andre Cronje that Fantom is growing day by day.

Currently, I see that there is a wave of capital migration from other Blockchains via Fantom, this is shown by:

Personally, I predict that, in the near future, there will be more and more Native DeFi projects built on Fantom, and it is these projects that will bring more TVLs to Fantom through Incentives from Liquidity Mining, this can be is an opportunity for early participants in the Fantom ecosystem.

However, Fantom is still stuck in the vortex of Farming – Lending from projects that have not yet had any outstanding elements.

This is the biggest limitation of Fantom that makes TVL unable to explode into the top 5 of ecosystems such as Ethereum, BSC, Terra, Solana and Polygon.

Hopefully in the future, Fantom will fix this problem, or at least be able to catch the trend as quickly as the Binance Smart Chain ecosystem to be able to retain the cash flow.

Here are some of their brief summaries:

What do you guys think about the Fantom ecosystem? Please comment below to discuss with idolmeta.net

LEARN ABOUT THE PONZI MODEL

HOW TO CHOOSE THE RIGHT PROJECT