Near Protocol Ecosystem (NEAR)

Near Protocol Ecosystem (NEAR) – An ecosystem ready to take off 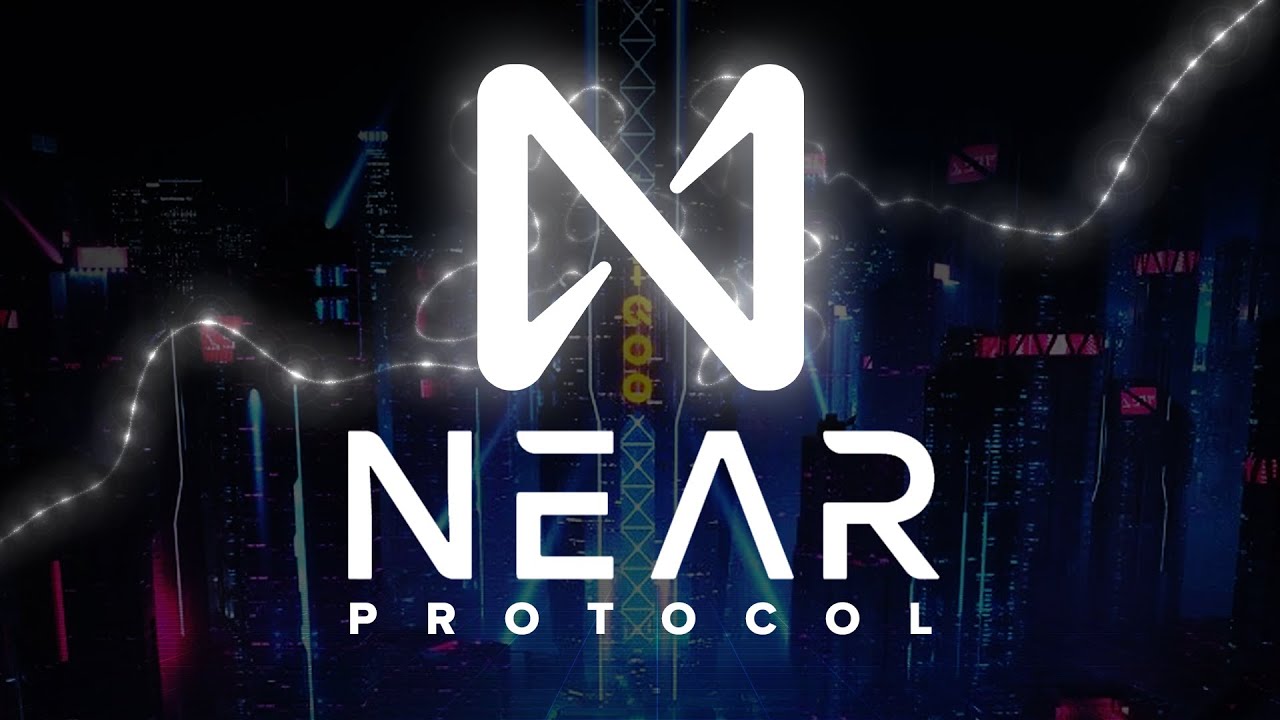 Let’s analyze & evaluate the whole puzzle pieces on the NEAR ecosystem, to help you “skin in the game” more effectively.

In the race of ecosystems, NEAR Protocol is definitely a good candidate platform. To help you have an overview of this potential ecosystem and help you find investment opportunities, I send you an article in the Ecosystem Digest series about Near Protocol.

Let’s take a look at the overall picture of the NEAR platform together!

What is the NEAR blockchain?

Definition of NEAR Protocol: NEAR Protocol is a decentralized application platform designed to serve the development of the Open Web, to create an open online world.

Highlights of the Near ecosystem

Near Foundation’s fundraising history is quite impressive, with 4 rounds of funding, reaching $35 million in two rounds and 1 unannounced round before 2021. Investors in Near Foundation include many large funds, for example. such as Coinbase Ventures, a16z, Multicoin Capital, Pantera, Arrington XRP Capital, IOSG Venture, Libertus Capital,…

Currently, the transaction fees and transaction speed of the NEAR network are quite impressive, with an average fee of only $ 0.1 (compared to $ 0.5 of Avalanche, $ 0.3 of Tron, …)

Full support and compatibility with EVM makes it easy for developers to move dApps from Ethereum to NEAR Protocol via Aurora.

The project has completed the design phase of the network structure, and is starting to work on the development of the DeFi network.

The Layer 2 pieces of infrastructure have passed the focus phase, with Aurora and Octopus Network already deployed and in the process of attracting developers, builders, and users.

The DeFi ecosystem on NEAR is still slowly forming the fundamentals, and has not yet attracted the cash flow and investors’ attention.

However, the cash flow has come to Aurora because of the rapid number of applications on the ecosystem (as it is easy to fork applications from other EVM-chains), with TVL reaching over $700 million in October. January 2022.

Pieces of the NEAR ecosystem

The Stablecoin project that has been brought to NEAR includes USDT, USDC, DAI and TUSD. As of January 2022, the stablecoins on the system are around $400 million, mostly focused on USDT and USDC, and mostly on Aurora and not on Near.

In addition, on Near there is also the implementation of Oin Finance’s stablecoin nUSDO – born when staking stNEAR (when using Metapool). However, this application has not been widely used, as evidenced by the small amount of TVL 5 million USD.

Currently, the first AMM DEX working on NEAR Protocol only has Ref Finance.

On Aurora, there are more DEXs such as Trisolaris, Wannaswap, Auroraswap and the leader is Trisolaris with more than 500 million TVL as of January 2022 (accounting for 70% of all Aurora’s TVL).

Trisolaris is the first DEX, receiving a grant from the Near Foundation and has a relatively agile development team in implementing new models for the project (such as veTRI), as well as integrating new token pairs extremely quickly.

The Oracle array in NEAR Protocol in particular has not yet made much progress.

Although Band Protocol and Chainlink have agreed to partner with NEAR Protocol for a long time, they have not released a testnet or mainnet product yet.

Flux Protocol is also an oracle on NEAR, used to serve the Flux prediction market, but it is not known whether Flux Protocol will serve Oracle services for other projects like Band Protocol and Chainlink.

This is the most important piece for the DeFi ecosystem across all platforms, but on NEAR Protocol, only Oin Finance (Stablecoin over-collateralized) is the first dApp in this segment.

In addition, upcoming Lending projects in the near future (January 2022) include: Burrow Cash (lending on Near), Aurigami (lending on Aurora). This is an important segment in any ecosystem to help improve capital utilization in the system, as well as bring NEAR’s large marketcap to TVL in the system.

Let’s wait for the launch of the Lending & Borrowing dApp in the future on NEAR!

Below are the current ROI and ATH ROI of IDO projects on Near. You can see that the ROI of projects on Smartpad and Bocachica as well as Nearpad have quite impressive ATH ROI, while IDO on Skyward Finance offers a relatively modest ROI. 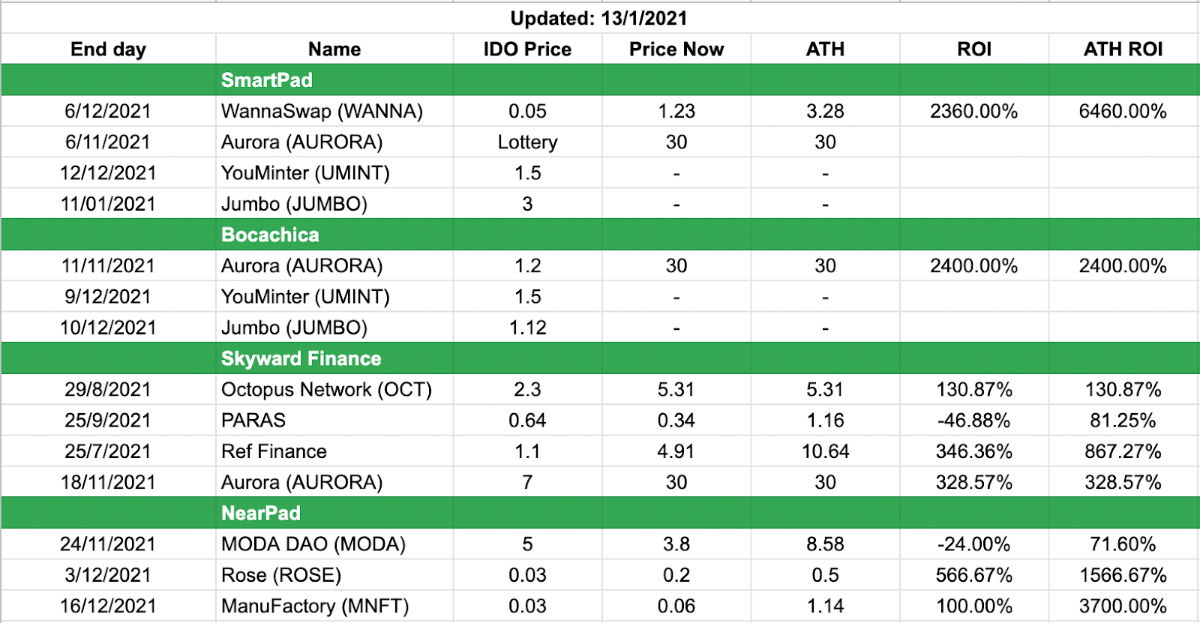 In the coming time, when the Near and Aurora ecosystems grow, the number of projects may increase and IDO on launchpad will be the first choice for projects when launching tokens.

This is the category on NEAR with the most projects, with two prominent names being Paras and Mintbase. The investor community on NEAR also pays the most attention to NFT projects, so this is also a key development area on NEAR Protocol for a long time. The number of NFT projects on NEAR is increasing rapidly.

However, the majority of NFT projects on Near and Aurora are collectibles projects, and NFT cannot be used for specific applications such as interacting with Dapps, using in games,… In the future, if you want promoting NFT on Near, the field of Interactive NFT on Near needs attention.

Future projections and investment opportunities on the NEAR ecosystem

Projecting the future of the NEAR system

The NEAR platform is focused on developing basic DeFi arrays, and is in the process of being finalized.

Especially, the lending segment is about to launch in the near future on both Near (Burrow Cash) and Aurora (Aurigami Finance), which will then become the basis for many other applications to develop such as yield farm leverage, derivatives, etc. .

With the bridges completed, the Near ecosystem will gradually take shape and attract cash flow if steps are taken to stimulate the ecosystem properly.

Thus, in the future, you will join us in waiting for the following developments on NEAR Protocol to perfect the DeFi world:

In addition, to attract cash flow to this ecosystem, we will wait for information such as:

Investment opportunity in the NEAR ecosystem

Current brothers have also begun to have investment opportunities in the Near system, including:

Idolmeta.net will update more investment opportunities for you in the NEAR ecosystem in the next time.

Thesis for the NEAR Ecosystem

I also have my own thesis when investing in the Near ecosystem. At the moment, cash flow is mainly concentrated on Aurora, making the valuation of projects on Aurora much higher than projects on Near native.

But when looking at the overall relationship, Aurora is just a piece of the puzzle to bring cash flow to Near and the purpose is to bring this money flow to Near to stimulate the ecosystem.

Therefore, I personally bet on the next time cash flow will flow from Aurora to Near by investing in leading projects on Near like Ref Finance when the market starts to realize this, and projects on Near has a solid foundation to take on the cash flow.

Note that this is just my opinion and not investment advice. You need to be careful and make your own decisions in the investment process!

Hopefully my above article has given you an overview of the NEAR ecosystem to effectively “skin in the game”, and here are the main ideas in the article to help you summarize:

Tags NEAR Near Protocol Ecosystem (NEAR)

Previous What is White Paper?
Next Binance Smart Chain (BSC)