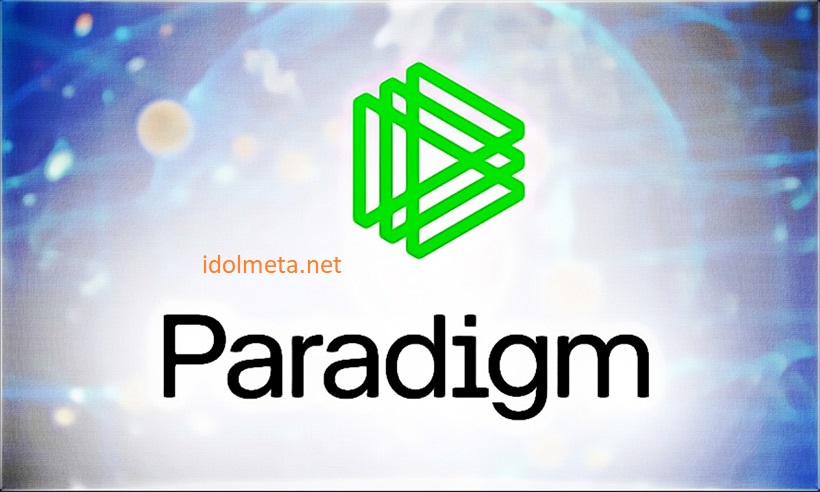 Paradigm is one of the largest investment funds in the crypto market, having invested in many successful projects from 2017 to the present.

Their enthusiastic support for projects not only in financial terms but also in terms of product development, searching for users to help the project,… has created the success of many projects up to now. present.

So what is Paradigm investment fund? What projects does Paradigm’s portfolio include? What is the investment style of Paradigm? Learn all about Paradigm through the following article.

Paradigm is an investment fund focused on supporting cryptocurrency projects. The investment method of the fund is flexible, long-term investment, multi-stage investment. They say they usually invest in the earliest stages when a project is just starting to take shape, and will invest more in those projects in later stages.

Paradigm says that the fund is capable of supporting the project in many ways, ranging from technical (mechanism design, smart contract security, engineering) to operational (recruitment, regulatory strategy).

The two founders of Paradigm, Fred Ehrsam and Matt Huang, first met at Coinbase’s Series B funding round with investment fund Sequoia. After talking a few times and feeling relatively compatible in many aspects, together they founded Paradigm to invest in projects in the crypto market together.

Here, I will tell more about the biography of each founder.

Fred Ehrsam is the co-founder of Coinbase. Previously, Ehrsam worked as a trader in the Securities Division at Goldman Sachs and in the Portfolio Analysis department at BlackRock. He holds a degree in Computer Science from Duke University.

Matt Huang is the Co-Founder of Paradigm. From 2014 to 2018, Matt was a partner at Sequoia Capital, focusing on early stage venture capital investments in mobile and internet companies, and leading the company’s investments in the space. electronic money sector.

Prior to Sequoia, Matt was the Founding CEO of Hotspots, a company backed and invested by YCombinator, which was acquired by Twitter in 2012.

Matt is also a personal angel investor in companies like Toutiao and Instacart, and bought his first Bitcoin in 2012. Matt graduated in Mathematics from the Massachusetts Institute of Technology.

As you can see, both founders of Paradigm are relatively early starters in the field of crypto as well as the investment field.

With such a huge profile in both technical and financial aspects, Paradigm is highly capable to help the development projects in many aspects as they promised.

Overview of the Portfolio of the Paradigm Foundation

You can check out Paradigm’s portfolio through the image below. Next, we will take a look at a few outstanding projects of each Sector.

Most of the projects mentioned below already have informative articles on idolmeta.net, if you are interested in any project, you can search for the project name to learn more! 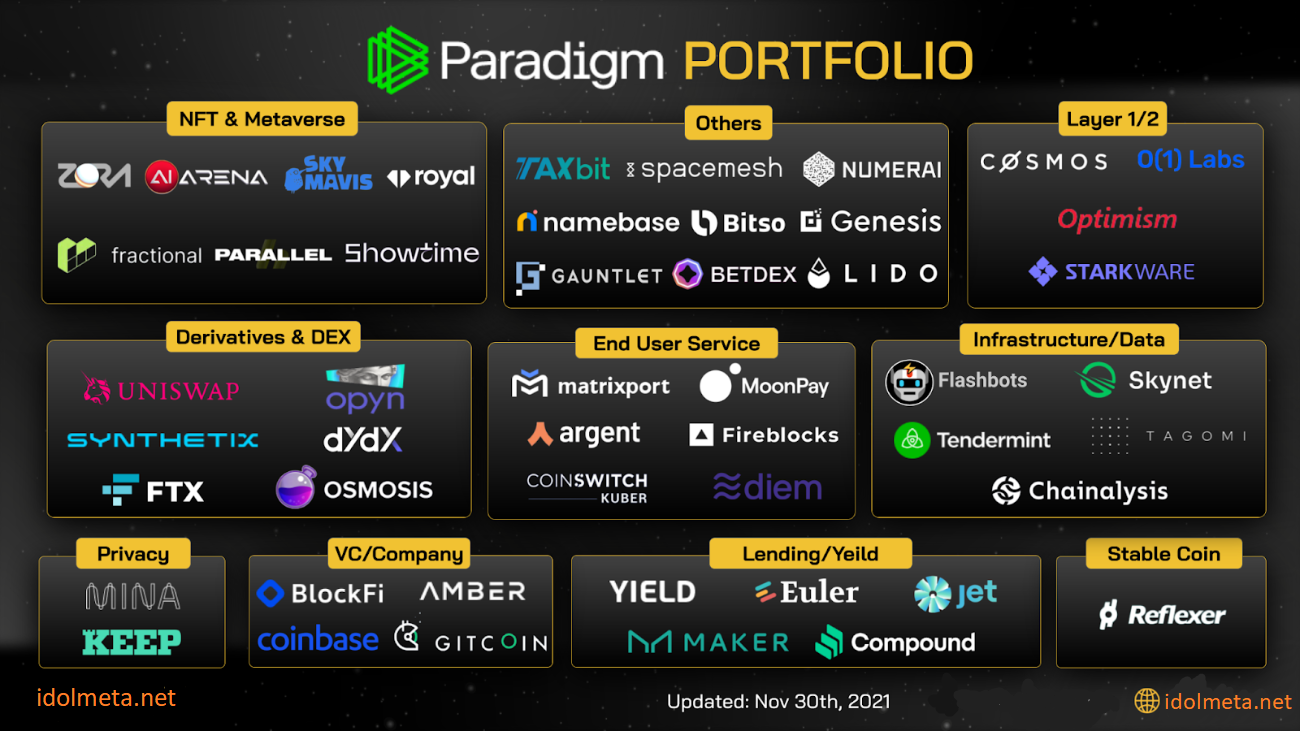 Layer 1 projects invested by Paradigm (besides Bitcoin and Ethereum):

⇒ Comment: As you can see, the number of Layer 1 projects invested by Paradigm is relatively small, only two projects. It seems that investing in blockchain platforms is not the strength of this investment fund.

However, the two deals they invest in have also had relatively strong growth in recent times, as they have invested in these two projects since 2019. In investment rounds in layer 1, they are usually the leader. , and relatively early investment (Series A) at a low project valuation.

Paradigm also invests heavily in Layer 2 Rollups solutions such as Optimism or StarkWare. They invest multiple times (2 times in each deal), often leading those deals – a way to show their dedicated support of these Layer 2 projects.

⇒ Comment: As you can see, Paradigm invests in NFT/ Metaverse/ Gaming a lot, and most of the deals are in the second half of 2021. Of which there are three gaming deals: AI Arena, Parralel, Axie Infinity , there are two NFT Markets, Zora and Fractional, a project about Social Network.

Game deals are the most invested deals in this segment recently, when gaming projects sprung up and Paradigm dropped money to invest in many projects.

Projects in the CEX segment that Paradigm invests in include:

Projects in the DEX array that Paradigm invests in include:

The projects in the Derivatives / Synthetic Asset segment that Paradigm invests in include:

Projects in the Lending segment invested by Paradigm include:

⇒ Comment: In addition to the two investments in top protocol lending in the crypto market, MakerDAO and Compound from 2019, the remaining transactions in lending protocol are from February 2021 onwards.

This shows that recently they have invested in Lending in DeFi a lot, after having “bet” in two top tier lending applications since 2019 (at a valuation of 500 million USD, now multiplied by 4-5 times compared to the previous year). with the milestone they invest).

In addition, they also invested in the BlockFi centralized lending application in a relatively late series, when the project was established and operating stably.

Infrastructure projects invested by Paradigm include:

⇒ Comment: Paradigm’s infrastructure investments have spread from 2019 to the present. The number of infrastructure pieces that Paradigm invests in is not much when compared to other large investment funds such as 3AC, a16z,…

Currently, I do not see the common characteristics of the above infrastructure projects, so I do not understand what Paradigm’s “investment thesis” in this infrastructure segment is. I will update more when I have more information or in-depth analysis.

Project on Services for End User

Projects in the Services segment for end-users invested by Paradigm include:

⇒ Comment: Investment deals in services for end users are invested by Paradigm in many areas, from payments to wallets, taxation and many others.

Investment deals are also at various stages of projects, from series A, B,… with small deal sizes, to large deals like MoonPay ($555 million at $3.4 billion valuation). .

Paradigm’s investment period also stretches from the end of 2019 to the present time, proving that they have maintained a constant interest in this end-user application segment throughout the investment period.

Investments in other areas of Paradigm include:

In mid-November 2021, Paradigm has just completed a $2.5 billion funding round to continue investing in upcoming crypto deals – $300 million larger than the $2.2 billion fund that a16z announced in mid-January. 6/2021.

This is not only a clear sign that money is flowing strongly into the crypto market, but also shows how terrible Paradigm is to raise such a large amount of capital to continue investing and operating.

The relationship between Paradigm and other investment funds

In addition, I do not have any other information about the relationship of Paradigm and other large funds in the market.

Most of the projects invested by Paradigm already have products and tokens. The top 5 projects with the best performing Tokens (current price compared to the starting price of 2021) are:

Investment trends of Paradigm in 2021 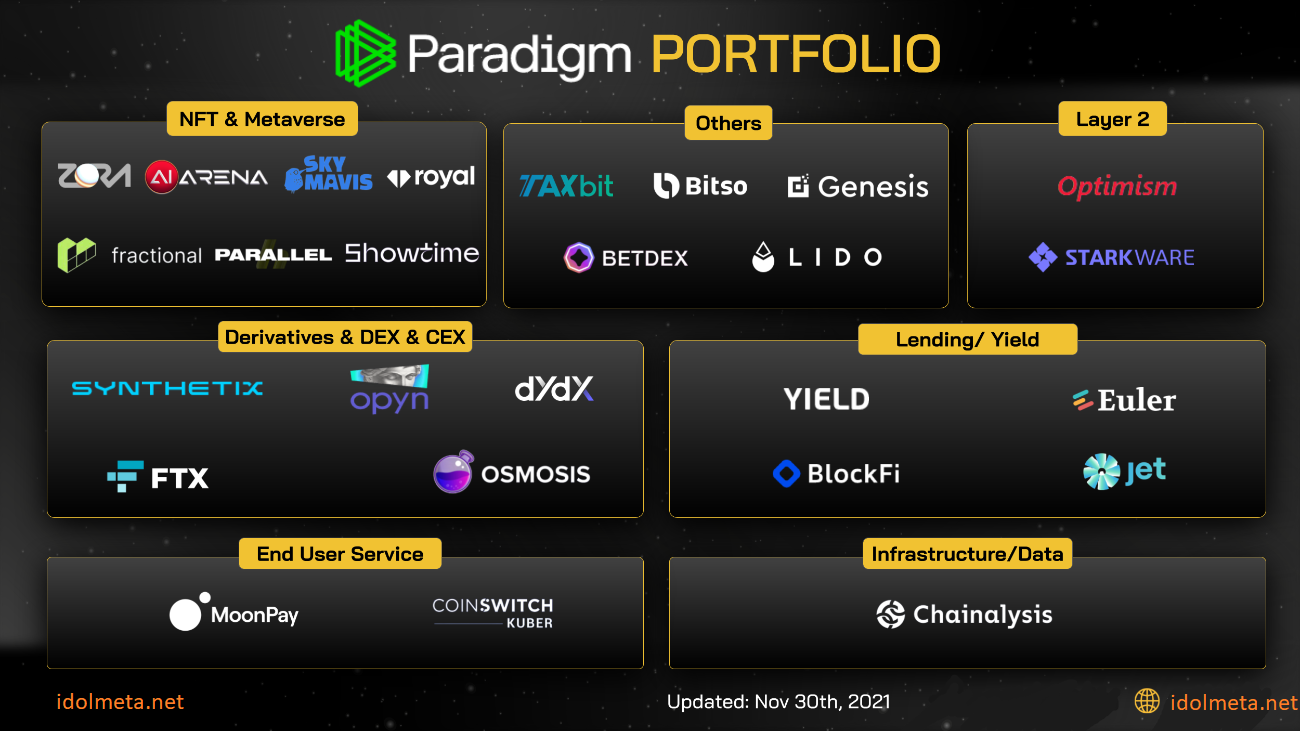 As you can see, this year, the segment Paradigm invested the most is NFT, Metaverse, Gaming. They also invest in many applications in the CEX, DEX and Derivatives segment (they continue to invest in leading projects in the segments), many lending applications on different platforms, not just focusing on Ethereum as before.

Layer 2 Rollups solutions are also noticed and invested by them: Optimism and StarkWare.

In particular, in the second half of 2021, NFT, Metaverse, and Gaming applications are of great interest to them, proving their vision that this market will continue to grow strongly.

Above is an overview of the Portfolio and some comments on investment trends of Paradigm, if you have any other questions or comments, please comment below to discuss with me and the idolmeta.net team !