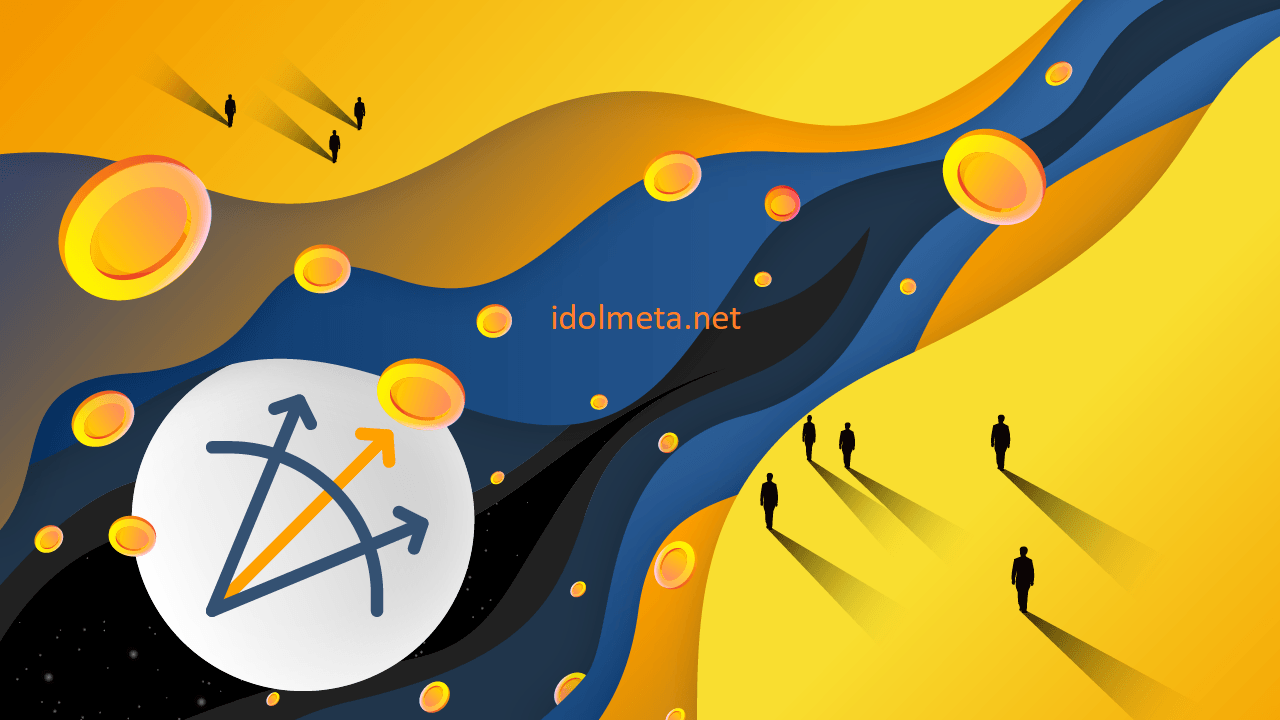 Three Arrows Capital (3AC) is a hedge fund, founded in 2012 and focused on finding high returns with low risk, founded by Su Zhu and Kyle Davies.

In an interview, Kyle Davies said that he strongly believes in the potential of cross-border financial markets with the emergence of new asset classes, many different asset classes, accessible by many more people.

He believes that Three Arrows Capital can profit from the accessibility of these assets, as they will quickly outpace other asset classes.

Around 2013, they started to pay attention to the crypto market and became a hedge fund in the market looking for arbitrage opportunities. Gradually, they not only arbitrage anymore, but also engage in long-term investing and invest early in projects in the market.

During a livestream with UpOnly channel, Su Zhu also shared that 3AC invests in the crypto market according to the long-term investment method.

They invest in projects with a “Go billion or go zero” mentality, ie great success or ready to lose their investment, not that they release the private tokens they buy to adversely affect their projects invest.

Three Arrows Capital was founded by Su Zhu and Kyle Davies, so in the next part, I will go through the profiles of these two VC founders with you.

After nearly 3 years working here, realizing the great potential in investing in cross-border asset markets such as currencies of countries, commodities and arbitrage opportunities between different regions of the world due to Due to their fragmentation, Kyle and Su Zhu jointly founded Three Arrows Capital.

Since then, for 9 years, he has been the CEO of this investment fund.

Su Zhu also studied at Colombia University in New York City, and then began working as a trader for nearly three years.

In 2009, Su Zhu started working as a trader at Flow Traders for more than 2 years, then he moved to become a Trader for Deutsche Bank – Germany’s largest private banking group for 9 months.

After that, he quit and founded Three Arrows Capital with Kyle Davies and held the position of CEO/CIO of 3AC for nearly 10 years. In addition, Su Zhu is also the Co-Founder of Sensus Markets. 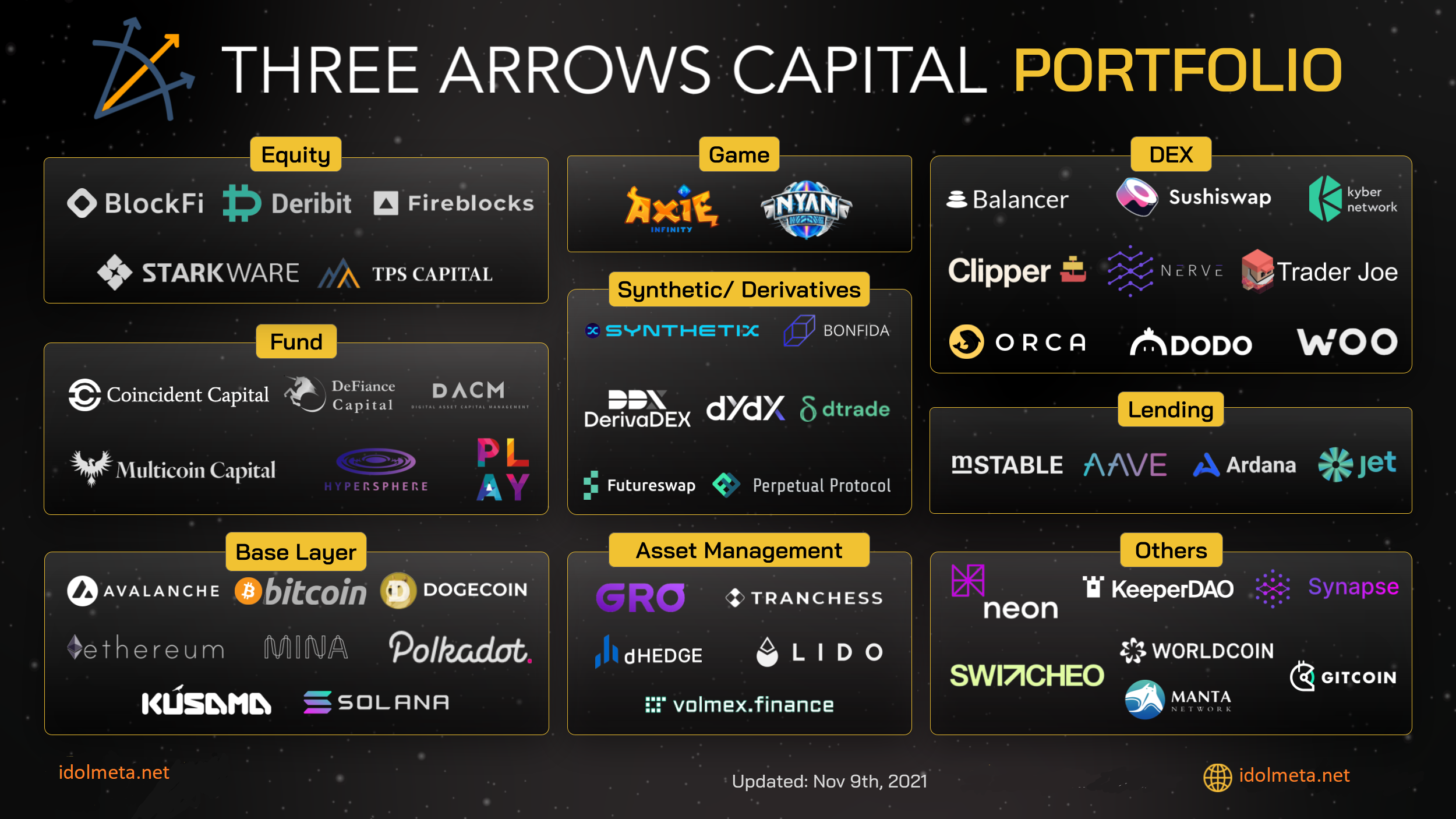 You can check out Three Arrows Capital’s portfolio through the image above. Next, we will take a look at a few outstanding projects of each Sector.

All of the projects mentioned below have informative articles on Coin98 Insights, if you are interested in any project, you can search for the project name to learn more!

3AC invests in many Layer 1 projects, and highlights are:

⇒ Comment: 3AC has quite a lot of notable investments in Layer 1 projects, and these projects are all performing very well in this 2021, when Layer 1 solutions continuously explode and grow. .

Other Layer 1 investments announced by 3AC include Mina Protocol and Kusama, and if the above are indeed all Layer 1 projects they invest in, then 3AC’s Layer 1 portfolio is truly outstanding with its quality. All the famous Layer 1 names in the market.

⇒ Comment: 3AC does not pay much attention to the gaming segment. Even the successful gaming deal of the first 3AC was recognized by Su Zhu as luck. After that, 3AC also started to allocate and invest in other projects in the game segment such as Nyan Heroes.

3AC has announced investments in AMM DEX projects including:

⇒ Comment: 3AC not only invests in AMM DEX on Ethereum (like DODO, Kyber, Balancer, Sushi) but also invests in many AMM DEX on many other chains like Orca, TraderJoe – big players on Solana and Avalanche.

These are also the two ecosystems where they invest heavily in the platform token.

In addition, 3AC also invests in many other names in this field such as Clipper, WOOTrade, Nerve,…

3AC has announced investment in projects in this segment including:

⇒ Comments: 3AC started as a hedge fund in the forex and Derivatives assets, and the 2 founders also worked in hedge funds for a long time as traders, so they certainly have a lot of money. Extensive experience in investing in derivative products and synthetic assets.

In addition to the above 3 projects, they also invest in many projects in this field such as dTrade, Bonfida, DerivaDEX, Futureswap.

Because 3AC has a lot of experience in derivatives trading, and the fund itself was born a derivative hedge fund, 3AC is quite “cool” when it has invested in both leading derivatives projects, dYdX and derivatives. Perpetual, and the leading project in the Synthetic segment is Synthetix.

3AC invests in projects in the Lending segment:

⇒ Comments: 3AC has made many investments in many lending protocols on many different platforms, in both money market and debt protocols.

In addition to Aave, the remaining protocols are not the leading players in the ecosystem at the moment, including two new deals: Jet Protocol and Ardana. You can research the above two projects to find investment opportunities.

3AC invests in projects in the asset management application segment, which can be divided into smaller segments including: decentralized investment trust, yield farming, staking solution, and index projects in market.

⇒ Comment: 3AC only bets on one project in each small segment in the asset management category, there is no competition among the players they invest in. This helps them to be ready to support the above projects, without facing conflict between the interests of the parties in the process of supporting the project.

In addition, 3AC invests in other pieces such as:

⇒ Comment: 3AC also invests heavily in centralized exchanges in the world such as Blockfi, Deribit or Fireblock.

Drama between 3AC and Ethereum

In November 2021, 3AC’s wallet was tracked to transfer more than 17,000 ETH to the FTX exchange. Su Zhu also acknowledged the 3AC fund’s move to sell ETH, citing a loss of confidence in Ethereum – due to high fees and poor user experience, and he said that the Ethereum community doesn’t care about it. deal with this problem, he believes in other Layer 1 solutions.

He also clarified that he still supports projects on Ethereum and still thinks that investing in Ethereum is a right move by 3AC, but it’s just that he doesn’t believe in Ethereum anymore. This move also comes when the AVAX price is growing strongly, leading many to question whether this is a ploy to push the price of Su Zhu.

However, Su Zhu’s “do not believe in Ethereum” thesis has been evident in 3AC’s recent investments, where deals were mainly on Avalanche and Solana.

Relationship between 3AC and other investment funds

3AC not only invests in projects by itself, but also invests in investment funds to take advantage of their own strengths such as:

⇒ Comment: 3AC has a close relationship with many large investment funds in the market, investing in funds to “take advantage” of their ability to analyze and evaluate projects in their strengths, to take full advantage of their strengths. efficient use of capital and human resources.

Most of the projects invested by Three Arrows Capital already have products and tokens. The top 5 projects with the best performing Tokens (current price compared to the starting price of 2021) are: 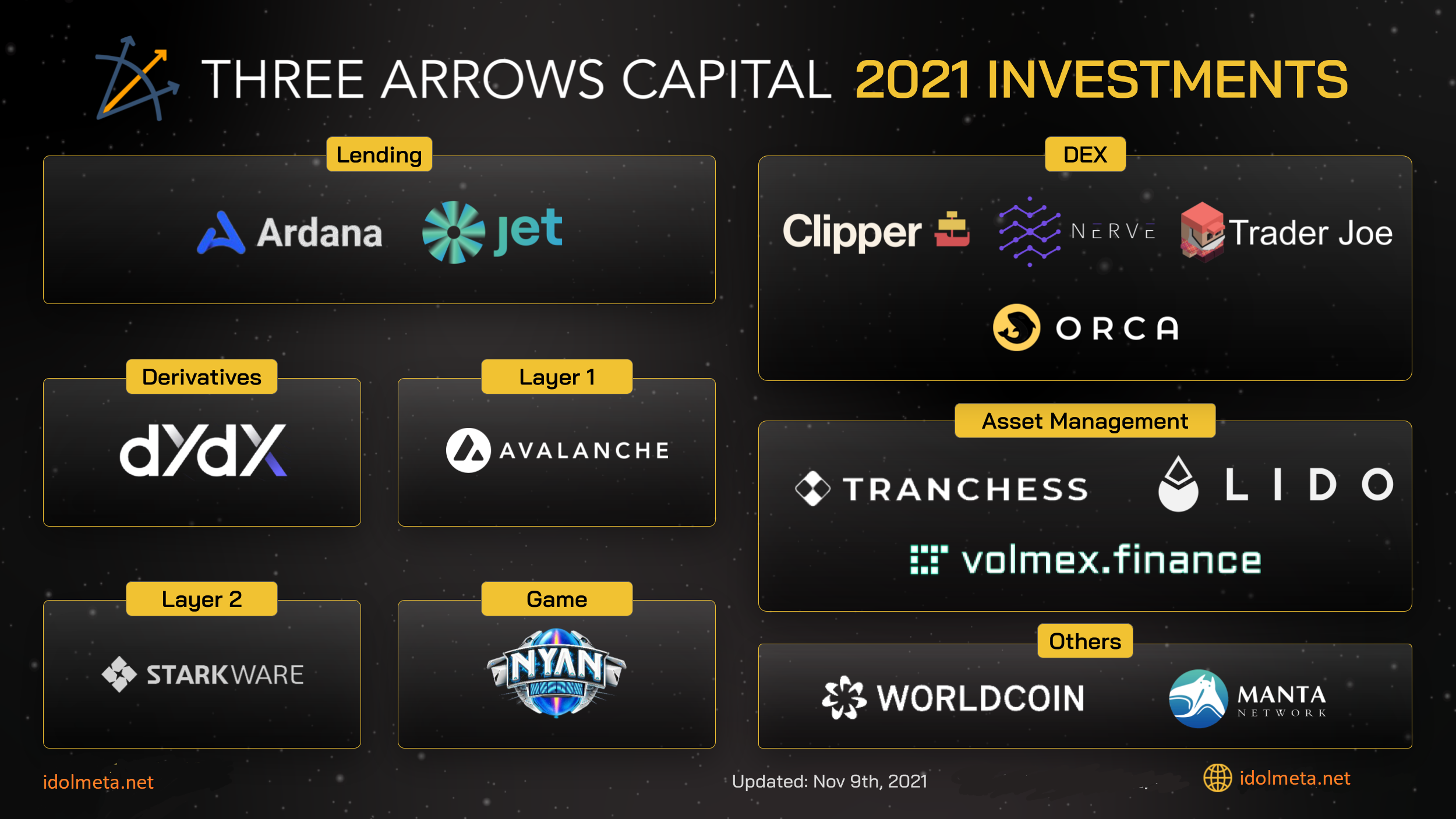 Investments of Three Arrows Capital in 2021

Three Arrows Capital is operating relatively enthusiastically in 2021, with investment down to 17 deals from the beginning of 2021 to now, compared to the number of 13 projects of Binance Labs, but still far behind the number of 37 projects. projects of Pantera Capital and about 30 projects of Spartan Group.

This year, instead of focusing on investing in infrastructure projects and Layer 1 and projects on Ethereum as in the past, they have invested more in applications located on other platforms, including including Gaming, DeFi on other ecosystems such as Cardano, BSC, Solana or Avalanche.

In addition, you can see that, since the beginning of the careers of the two founders are traders and the beginning of 3AC is a hedge fund forex and derivatives, the Derivatives segment is extremely focused by 3AC and invested in both players. The main ones on the market were dYdX and Perpetual from a very early time as I mentioned above.

It is likely that, after the money has flowed through the AMM, Stablecoins and other lending and borrowing applications in the market, derivatives and margin trading will be the next place where the money in the market is headed.

Derivatives in the traditional market are worth $3.2 trillion, and the crypto derivatives market is just a tiny fraction of that. Therefore, it is possible for money to flow through derivatives.

Through the above analysis, the following conclusions can be drawn about 3AC’s investment style:

Above is an overview of the Portfolio and some comments on investment trends of Three Arrows Capital, if you have any other questions or comments, please comment below to discuss with idolmeta.net !