What is Liquid Staking?

What is Liquid Staking? Is this a new trend in the future? What are the key points to finding an excellent Liquid Staking project?

Liquid Staking is a keyword that has been mentioned since the summer of 2020, and recently we have started to see a few projects in this sector rise.

In this article, let’s learn what is Liquid Staking with idolmeta.net? Is this a sustainable sector and can develop in the future?

What is Liquid Staking?

Liquid Staking is used to describe protocols that allow the creation of synthetic assets in the form of fungible tokens of assets staked in a decentralized network.

Thereby, the Liquid Staking Protocol allows staking assets to be bought & sold, liquid on other markets.

Can also use synthetic assets as collateral in decentralized finance (DeFi) applications.

In addition to receiving the staking reward from the staked KSM, users can also use LKSM in other protocols on Acala to mint kUSD, or participate in providing liquidity & Liquidity farming.

Why does Liquid staking have a chance to thrive in the future?

Idolmeta.net has an article explaining why Proof of Stake is more secure and widely used than Proof of Work, you can refer to it for better understanding!

Watch now: 3 reasons why Proof of Stake is more secure than Proof of Work

Therefore, the majority of new blockchains opt for PoS, or PoS customizations, to secure the network.

For those of you who don’t know, the world’s second largest decentralized network, Ethereum, is also in the process of gradually moving from PoW to PoS and becoming Ethereum 2.0.

In PoS networks and most PoS customizations, native tokens are used as collateral to identify participants (“validators”) in the consensus process (“staking”).

To ensure that Validators do not cheat in transaction confirmation & validation, PoS protocols will lock the number of native tokens staking, and may confiscate or burn the tokens that the validator has staked in case of detecting behavior. cheat.

Liquid Staking allows Validators or Delegators to use capital more efficiently. When users deposit native assets into staking protocols, users can participate in the security of the network and receive block rewards.

In addition, users receive back synthetic assets in the form of fungible tokens representing staked tokens, which users can use to use in supported protocols to earn additional profits.

For example: Deposit ETH to Lido to receive stETH and block reward. Then use liquidity-providing stETH in Curve or Saddle for an additional Liquidity Mining bonus.

Ethereum is the cradle of DeFi and is currently also one of the fastest growing DeFi places. This causes large amounts of ETH to be locked up in DeFi Protocols.

Lido is considered the most powerful Liquid Staking Protocol on Ethereum, the project tends to expand horizontally when it supports the Terra system and Solana is coming soon.

But in the next 6 – 12 months, the picture of Liquid Staking on this ecosystem is likely to grow much stronger than it is now. Some prominent projects can be mentioned such as: Karura & Acala, Bifrost, Stafi, …

Learn more: What do you know about Polkadot and Kusama?

The business model in Crypto is not much different when compared to traditional finance, it is a framework that briefly, intuitively and systematically describes how to bring long-term value to a project, user use and capture value through sound monetization strategies.

As for Liquid Staking Protocol, I realize that this project team is providing a network product that benefits many parties, including:

⇒ In general, when increasing usage from users, the benefits for stakeholders also increase. This is the positive network effect.

Currently, the only application used for this project team is Governance – participating in the ecosystem governance of the Liquid Staking project.

But there are 2 other applications that are much more remarkable that it is likely that in the future projects of this group will apply to the mainnet: 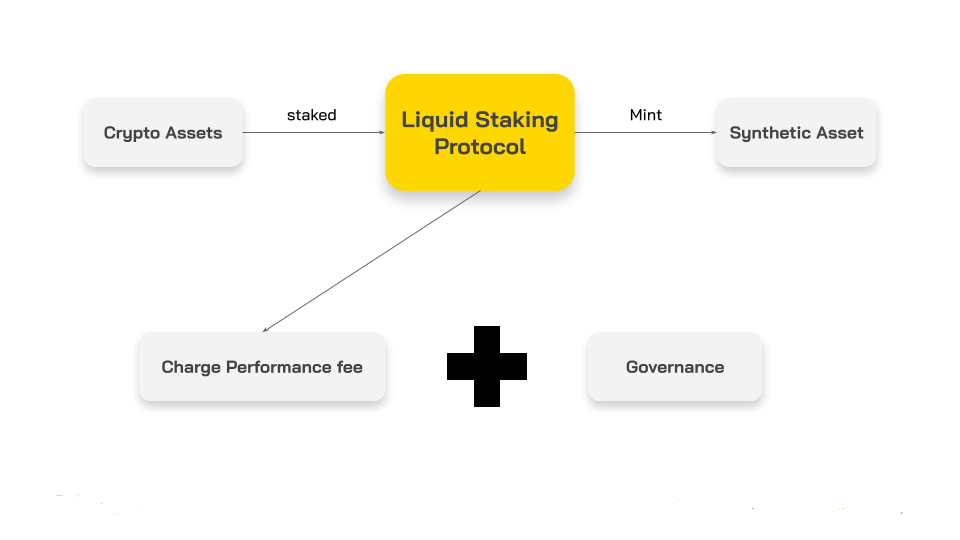 Most Liquid Staking projects calculate a protocol fee by charging a part of the fee on the profits earned by users, in my opinion this is a reasonable way of charging, based on the principle of mutual benefit.

The project may share all or part of the protocol fee to token holders or stakers by some means.

Example: User Staking 1,000 ETH into Lido with APR of 4.4%. After one year, that person withdraws capital from Lido, they will receive their capital back plus profit from the block reward, equivalent to:

On the Lido side, the project receives a protocol fee in return: 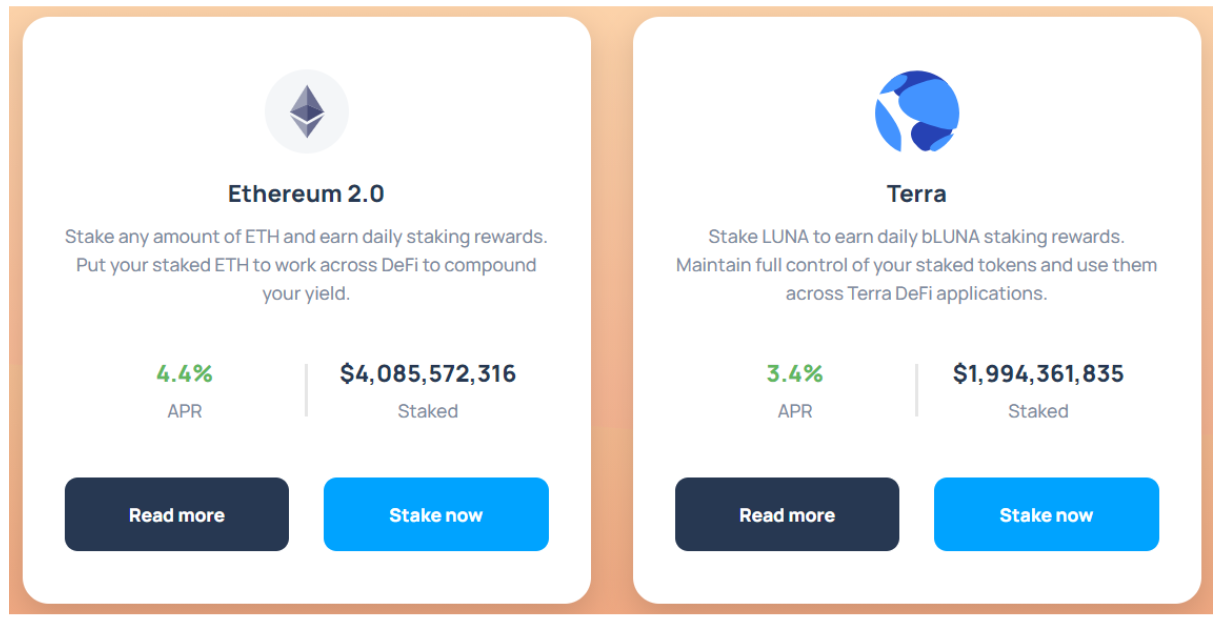 In fact, Lido’s Liquid Staking product is launching on two L1s, Ethereum and Terra, do a quick calculation with the above figures (assuming TVL & APR do not change), then the Protocol fee that Lido collects every year in the $25M range.

Basically, by holding a certain amount of staking tokens in the networks, the Liquid Staking Protocols have the right to participate in the governance of that L1 project.

Assuming the Liquid Staking Protocol grants this authority to LDO holders, I think this is an outstanding use case of the project team.

Then, holding the native token of Liquid Staking Protocol is equivalent to being able to participate in the governance of related ecosystems.

The Future of Liquid Staking

In my personal opinion, I think Liquid Staking will thrive in the following ecosystems:

Parachain Slot Auction will cause a very large amount of KSM & DOT to be locked up and do nothing, Liquid staking is a very suitable product for the Kusama / Polkadot ecosystem as it releases a large amount of assets to the secondary market.

The L1s with DeFi in action

Some L1s have active DeFi projects such as Ethereum, Terra, Solana.

In theory, all blockchain PoS is a potential market for Liquid Staking to grow, but if the DeFi ecosystem of those blockchains themselves does not develop, how can the issued Synthetic Assets be used?

So, in fact, only blockchains with a thriving DeFi ecosystem can the Liquid Ztaking team develop sustainably, based on foundational DeFi pieces such as AMM, lending,…

In crypto, when a new trend appears, in addition to the core projects with long-term development orientation in the same sector, there will also be new projects springing up to follow, making short-term.

So how to identify potential projects that can bring high ROI in the project team working on Liquid Staking? Where is the key point?

From the perspective of a Liquid Staking Protocol user, they will want to make better use of their capital to earn as much yield as possible.

While the interest rate from block reward is quite low, usually below 10%, the remaining yield comes from DeFi protocols (Liquidity mining, one-side staking,…).

So, as a synth asset released by a Liquid Staking Protocol is adopted by more and more DeFi protocols, the more options and tactics available to the combined users.

So, in my personal opinion, the adoption & adoption of synthetic assets is one of the keys to the long-term success of projects in the Liquid Staking Protocol team. 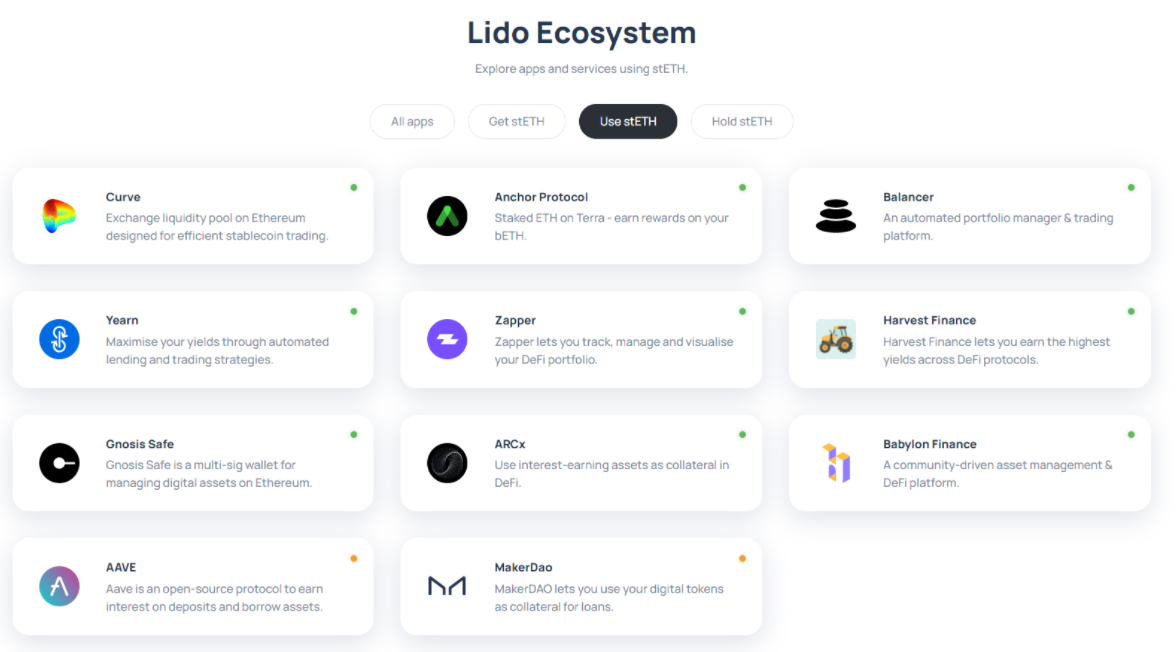 In general, when considering investing in a project under Liquid Staking, you need to consider the following 3 factors:

Thus, idolmeta.net introduced you to what Liquid Staking is, whether Liquid Staking will develop in the future, and the key points to find an excellent Liquid staking project.

Disclaimer: All information in this article is for informational purposes only and should NOT be considered investment advice. Investing in cryptocurrencies involves extremely high risk and you should only invest the amount that you are willing to lose.

Previous What is Lending?
Next What is Mainnet and Testnet?