What is Zk Rollup?

What is Zk Rollup? Advantages and limitations of Zk Rollup 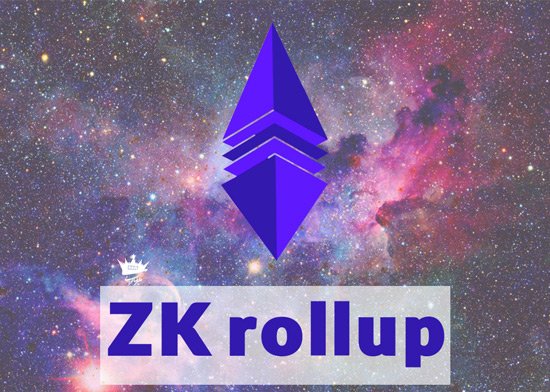 What is Zk Rollup? What is the difference between Zk Rollup compared to other Layer 2? What Zk Rollup projects are there in the market today? Find out here.

Rollup is a Layer 2 solution that is highly appreciated by the community, of which there are two main models, Optimistic and Zk Rollup.

In previous articles, I have shared quite a lot about Optimistic Rollup and the outstanding projects in it. You can refer back here.

In today’s article, I will share with everyone an overview of Zk Rollup, its advantages, limitations and some outstanding Zk Rollup projects.

What is Zk Rollup?

Zk Rollup allows to aggregate a large number of transactions into a Rollup block and generate a succinct proof of block off-chain.

Then, the smart contract on Ethereum layer 1 just needs to verify that Proof without re-executing the transactions.

This can save a lot of gas fees as Proof verification is much cheaper than doing the computation again.

Why is Zk rollup better than other Layer 2 solutions?

In Vitalik’s view, there are basically 5 scaling strategies for Ethereum:

In the Layer 2 segment, it can be said that Rollup is the leading solution.

The main point to make Zk Rollup rated higher than Optimistic Rollup is that the completion time (the process of verifying – confirming the validity of the transaction) of Zk Rollup is the fastest.

The Optimistic Rollup is secured through fraud proof, an approach that exposes them to a “challenge game”.

While ZK Rollups are secured through math (prove to others that you know the answer without telling the other person the answer), you will clearly see the difference between them through a wallet. Simple example below:

Zk Rollup and Optimistic Rollup enter an adult Bar, this Bar can only be entered by people over 18 years old. Security asked: “Can I see your ID card?”.

From the perspective of retail users, “Challenge game” is represented by the waiting time for withdrawals on platforms such as Optimism or Arbitrum.

If the withdrawal time is reduced, the user will experience a better use, in return the security will be poor because the cost of network attack will be less.

Zk Rollup solutions do not suffer from this, over time, as zero knowledge proof technology develops, Zk Rollup only gets better and better, the process of verifying – validating the Rollup block will adjust quickly and cheaper.

That is why Zk Rollup is recognized as the leading scaling solution for Ethereum in the medium to long term.

In fact, Zk Rollup technology still has many limitations at the present time, we will find those limitations in the following sections.

“In the medium to long term, ZK rollups will succeed in all use cases as ZK-SNARK technology improves” – Vitalik Buterin.

On the current market, there are many projects made about Zk Rollup, each different approach has its own pros and cons.

Understanding those advantages and limitations will help us have more objective views, support the process of analyzing & evaluating the potential of those projects to find good investment opportunities.

Personally, we can classify Zk Rollup projects based on 2 factors:

Choosing to store data on-chain or off-chain (also known as validium) brings its own pros and cons, no choice is optimal in all cases.

The second point to note is that Zero-knowledge proof technology is used, similar to the above case, there is no best solution in all cases, it is a balance between proof size and security assumptions.

You can see the relationship between them through the image below. 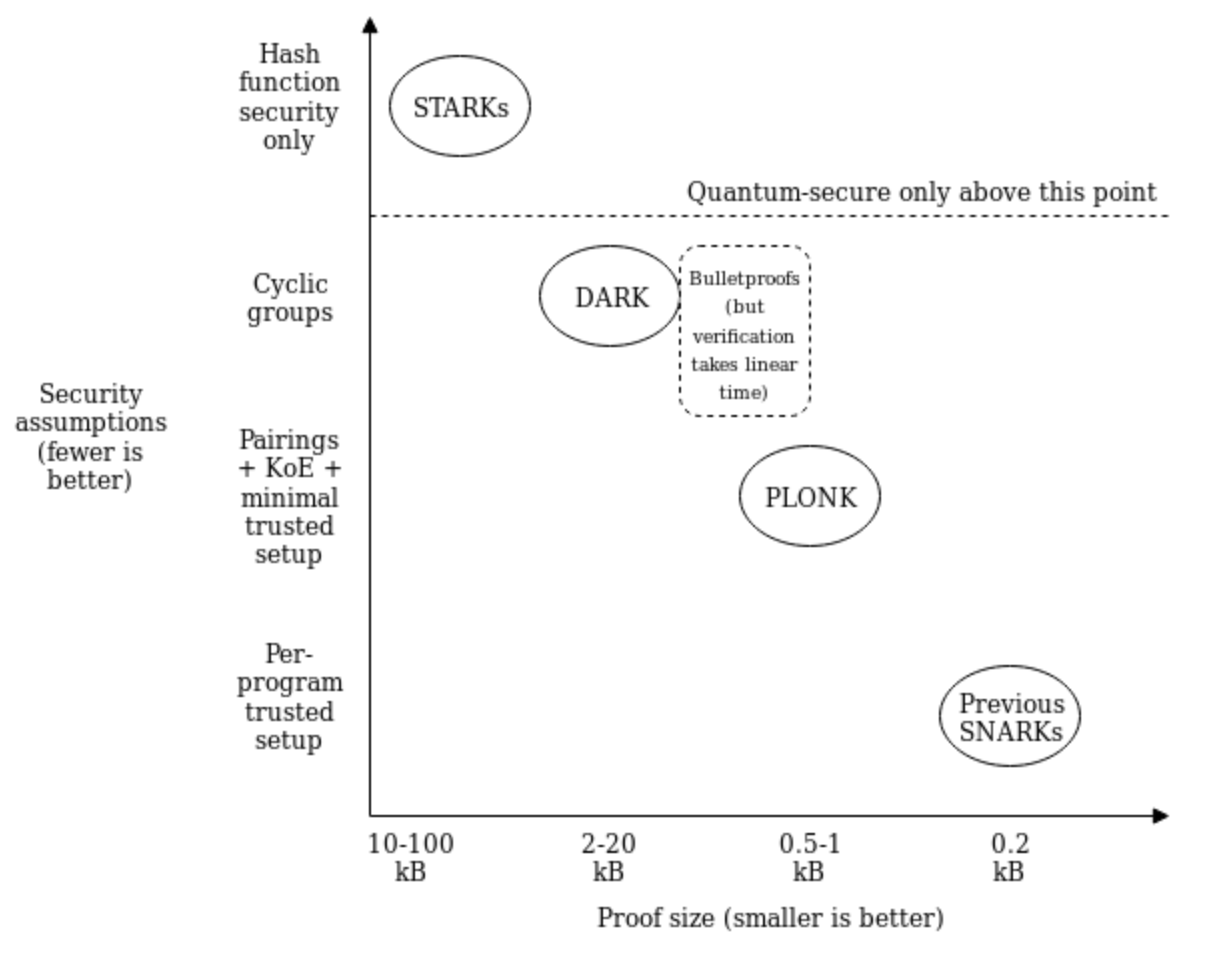 General limitations of Zk Rollup projects at the moment

This is because each rollup block eventually has to be posted to Ethereum, which ties their fees to Ethereum fees (Zk Rollup saves more fees because they only post Proof), so each Rollup platform can only scale Ethereum by a certain percentage.

Next, at the moment, zk-Rollup is not developer friendly, application scenarios and functions are quite limited:

Here are some prominent Zk Rollup projects in the market;

Starkware (aka Starkware Industries) is a company founded in January 2018 by Eli Ben Sasson – Co-Founder of STARK & ZCash.

StarkWare helps improve the scalability and privacy of blockchains by using STARK technology to deploy and verify zero knowledge proofs.

The first product that StarkWare launched was StarkEX, which can be viewed as a Specific L2, StarkEX’s applications are limited to simple transactions & payments such as: AMM, Spot Trading, Payments, NFT minting & trading.

StarkEX allows Dapps to deploy in 3 modes as follows:

StarkNET is the Zk Rollup General & Permissionless version of StarkEX, it is predicted to be fully launched in Q1 – Q2/2022.

It acts as another General L2 on top of Ethereum, allowing any Dapp to build on it without compromising aggregability and security. 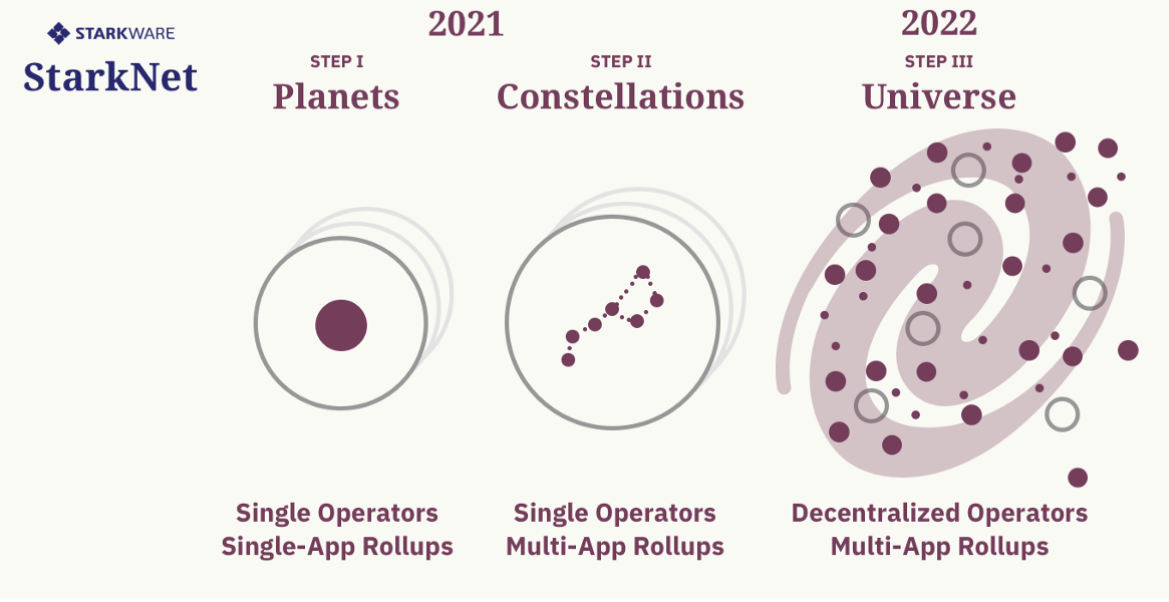 StarkEX & StarkNET have their own programming language and executable virtual machine, they are not Ethereum EVM compatible.

Therefore, developers who want to build Dapps on StarkNET in the future, they will need to learn a new programming language that is Cairo, the native smart contract language for StarkEX & StarkNET.

Speaking of Zk Rollup, in addition to Starkware, another company that is equally famous is Matter Labs. The Zk Rollup product that Matter Labs offers uses PLONK to deploy and verify zero knowledge proofs.

The common use of the two versions also only serves payments, it is not as diverse as StarkEX. 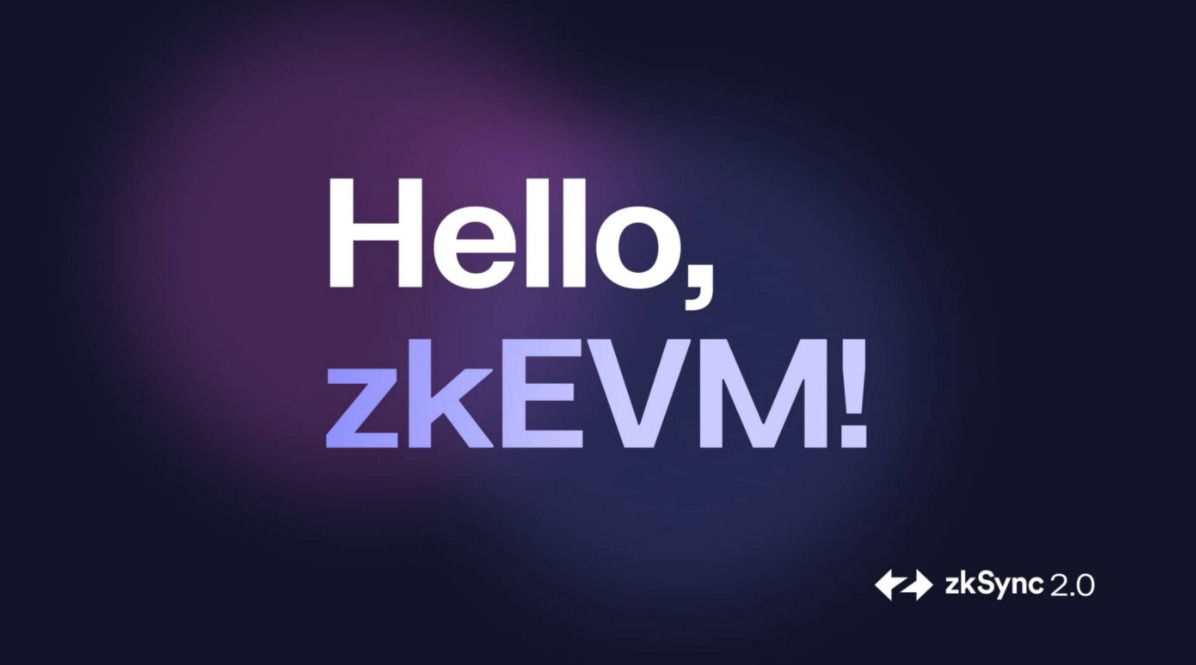 At the same time, Matter Labs is also working to launch an EVM-compatible version of Zk Rollup (ZkEVM), which is expected to launch fully in Q1/2021.

The native smart contract language on this version is Zinc and this version also has its own executable, which will have a lot of compatibility with EVM.

Loopring was launched in late 2019, it uses a set of algorithms called SNARK to deploy and validate zero knowledge proofs.

Loopring has undergone several upgrades, the first of which only supported DEX (orderbook) trading. Then in the second version, Loopring supports payments & transfers.

At the same time, Loopring is also working on an EVM-compatible version of Zk Rollup (ZkEVM), but the first version is likely to take another year or so to arrive.

A simple thesis on the direction of Zk Rollup development “in the long run, whatever the L1 blockchain can do, a Zk Rollup can do it significantly better”.

Following this line of thinking, I think the solutions Zk Rollup wants to be the ultimate winner must maintain all the salient features of L1, in this case Ethereum like:

So I see StarkNET & ZkEVM as promising approaches. ZkEVM will have a bigger advantage as it still maintains the same dev experience on Ethereum L1.

Above are some of my thoughts on the pros & cons and general direction of Zk Rollup projects. If you have other questions related to the above topic, please comment below so that idolmeta.net can help you right away!

Previous What is Yield Farming?
Next What is Blockchain Explorer?